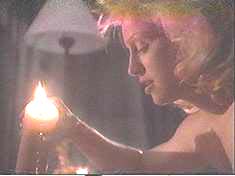 Arpan Panicker / fullhyd.com
EDITOR RATING
3.0
Performances
Script
Music/Soundtrack
Visuals
NA
NA
NA
NA
Suggestions
Can watch again
NA
Good for kids
NA
Good for dates
NA
Wait for OTT
NA
This movie is as close to a take-off at Basic Instinct as possible. But there are a few problems here. One, Madonna replaces Sharon Stone. Two, Willem Defoe replaces Michael Douglas. Three... what other reason do you need to keep away from the movie?

Madonna is the only reason why anyone might see this movie. The problem being, you'll kick yourself later for committing such a stupid mistake. She can't act for nuts. With an expression that defies the adjective "wooden" itself, her emoting requires that you have significantly developed deductive powers to know what she is trying to say. And the rest of the cast is worse than her at acting.

The story is déjà vu all over, if you have seen Basic Instinct. Old man found tied and dead. Signs of drug abuse. Here, he hasn't been stabbed, but has conked out due to a cardiac arrest caused by vigorous sex! Evidence? Video of the old man with a naked, younger woman.

Okay, time to take sides. Defense attorney Frank Dulaney (William Dafoe) takes up the cause of the accused girl, the deceased's mistress, Rebecca Carlson (Madonna). District Attorney Robert Garrett (Joe Mantegna), who is out to get Rebecca, leads the prosecution. Other characters include the old man's secretary, another suspect and Frank's wife.

The story gets going with rather stupid court scenes and, worse, lovemaking scenes between Rebecca and Frank. That's the tragic part of the movie; the lovemaking scenes tend to bore you! Especially, because they follow and are followed by uninspiring court scenes. The final nail in the coffin is the total lack of chemistry between Madonna and Defoe. Especially, when you remember Michael Douglas and Sharon Stone setting the screen ablaze in Basic Instinct.

The supposed suspense in the movie is uninspiring, and considering that the movie has been released as a soft-porn flick rather than for its thriller attributes, I guess the audience won't mind it. The only thing it might mind is the cuts that act spoilsport just as another kinky scene kicks off between the lead pair.
Share. Save. Connect.
Tweet
BODY OF EVIDENCE (HINDI) SNAPSHOT