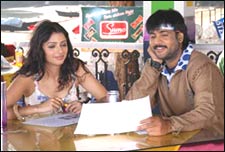 EDITOR RATING
5.0
Performances
Script
Music/Soundtrack
Visuals
NA
NA
NA
NA
Suggestions
Can watch again
NA
Good for kids
NA
Good for dates
NA
Wait for OTT
NA
Satyabhama is a quick-and-dirty, no-frills remake of 50 First Dates (starring Adam Sandler and Drew Barrymore), which was an innovative and perceptive tale of a girl who has short-term memory loss disorder – each day when she wakes up, she’s forgotten everything that happened the previous day. So when Sandler falls in love with her, he has to court her afresh each day.

Satyabhama stays faithful to its original almost to the point of hero-worshipping perfectionism, right to the ending. Which is to its credit, since you’d have assumed that the ending would’ve been Tollywoodized for easy consumption by Telugu audiences.

What don’t work for it, however, are a rather bland narration and presentation, a B-list starcast, and plenty of gaps of logic – you know, where you start off innumerable times with “why don’t they just…” All these work together to make a promising film quite ordinary.

Krishna (Sivaji) is a sand-sculptor who wins a contract from the Department of Tourism to work on the beaches of Goa. There he runs into Satyabhama (Bhumika), who he charms with his smooth-talking and wins another date with just the next day.

However, when he meets her the following day, she humiliatingly rebuffs him. He then learns that she’s had an accident several months back due to which she remembers life till exactly that day, and then forgets what happened each day when she goes to sleep that day.

Sivaji however is deeply in love with her, and indefatigably woos her each day, against resistance from her well-wishers and family. His efforts each day are one of the examples of the sloppy writing – why does he need to try different things each day, instead of sticking to the same process?

When he finally gains acceptance from her family, he makes a video using the diary she writes and with co-operation from all her friends, to remind her of the days before, and the injury she’s had. So every morning when she wakes up, she is shown that video, and life becomes simpler for Krishna.

However, when his parents come to know of Satyabhama’s disorder, they fiercely resist it, and Satyabhama, upon overhearing the conversation, decides that she is wrecking Krishna’s career and life, and breaks up with him, burning the diary and the video.

Even if it’s shot entirely in Goa, Satyabhama looks very much like the low-budget movie that it is. The comedy is pretty ordinary, there aren’t too many characters, and there’s nothing much by way of dialogues or concepts. All actors are talented, but they’re featured on a canvas that doesn’t do the talents enough justice. And there are no songs that can become popular by themselves.

Take it easy with this one unless you can forget tomorrow what you did today.
Share. Save. Connect.
Tweet
SATYABHAMA SNAPSHOT

ADVERTISEMENT
This page was tagged for
50 first dates tamil remake
50 first dates telugu version
satyabhama telugu movie name in tamil
Satyabhama telugu movie
Satyabhama reviews
Follow @fullhyderabad
Follow fullhyd.com on
About Hyderabad
The Hyderabad Community
Improve fullhyd.com
More
Our Other Local Guides
Our other sites
© Copyright 1999-2009 LRR Technologies (Hyderabad), Pvt Ltd. All rights reserved. fullhyd, fullhyderabad, Welcome To The Neighbourhood are trademarks of LRR Technologies (Hyderabad) Pvt Ltd. The textual, graphic, audio and audiovisual material in this site is protected by copyright law. You may not copy, distribute, or use this material except as necessary for your personal, non-commercial use. Any trademarks are the properties of their respective owners. More on Hyderabad, India. Jobs in Hyderabad.