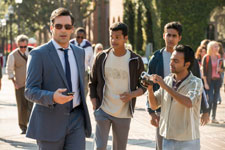 Nupur Barua / fullhyd.com
EDITOR RATING
6.0
Performances
Script
Music/Soundtrack
Visuals
7.0
5.0
6.0
8.0
Suggestions
Can watch again
Yes
Good for kids
Yes
Good for dates
Yes
Wait to rent it
No
"The contract money from Pittsburgh Pirates helped my family a lot - I got my sister married. Right now, we are building a new house. I can take care of my family now," said Dinesh Patel in a recent interview. And that, right there, is the Great Indian Dream, fulfilled in America, with plenty of baseballs thrown in.

Dinesh and Rinku Singh, two Lucknow boys, had no idea what a baseball was. That did not stop them from becoming legends, of sorts - a feat that would even inspire a movie in Million Dollar Arm. And unlike the last slice-of-life Hollywood film to be based in an Indian setting, this one is more realistic, both in its tale and in its portrayal of India, and will be an inspiration to many youngsters of the sub-continent.

J B Bernstein (Jon Hamm) is no longer the legendary sports agent he once was. He is losing out to corporates that manage the careers of sports stars. His partner, Aash (Aasif Mandvi), shares his desperation over the company that they run jointly, and realizes that to stay afloat, they need to think out of the box.

JB runs out of ideas, but on a fateful night, while watching Indian cricket, he comes up with a brilliant plan. He wants to go to India to scout for baseball talent. With a reality show titled Million Dollar Arm, he is confident that he will get a few contestants to show their baseball throw.

He gets 37,000 contestants, even as he battles the smells and sounds of India, along with the grumpy sports scout Ray Poitevint (Alan Arkin). Almost none of the contestants has ever held a baseball before, forget throwing one. But as the competition intensifies, in true reality TV style, JB finds a winner, Rinku Singh (Suraj Sharma), and a runner-up, Dinesh Patel (Madhur Mittal). The two boys are then whisked away to the United States of America, where they will be trained to throw the baseball.

The rest of the movie is all about the trials and tribulations that the boys face as they grapple with a foreign culture, and learn to discipline themselves. The latter is not difficult, considering that both of them were javelin throwers back in India. They have one aim - or at least JB and his team do: to get a major league team to sign them up.

Considering that this is a Disney movie, expect more than your deserved share of sweetness. In fact, everything about the film is glossy and nice, despite the heat and dust of India. Which makes the script rather predictable. Yes, it is a sports movie, and like all films of the genre, the screenplay is about the triumph of the underdog. And before that happens, there are the usual hurdles, the learning experiences, the epiphanies, and a couple of tamed wild ones - in this case, JB.

The accent that the two Indian boys are made to speak in sounds a bit forced - somewhat like a Westernized version of Indian English, with tones and fluctuations fixed to make them sound just so. There is plenty of Hindi, too, though. The plot points are placed exactly where you would expect them to be, and the pace is just about right, though the dullness creeps in once in a while.

Jon Hamm is Don Draper wherever he goes - that cannot be helped. Seeing him as a sports agent is a slight jolt to the fan of the TV series that he so successfully acts in, but he manages to make you forget the period drama and convince you. Actually, he does not do much in terms of acting - he is just there, but he is the protagonist, in a way.

Suraj Sharma made a brilliant debut with Life Of Pi, and this movie is a comedown for him. He is sincere, though, as is Madhur Mittal. Their roles do not give them much to do except play baseball and stare in awe at the modern world that is the US. Pitobash Tripathy has a small but effective role. Lake Bell, Aasif Mandvi, Alan Arkin and Bill Paxton are wasted, although Arkin makes an impact.

Unlike in other movies made with the Western eye, the production design for the Indian portion in Million Dollar Arm is not too glamourised in its filth and chaos. Which makes the country look more realistic. The USA, on the other hand, is shiny and polished, and the colour palette immediately identifies this movie as a Disney production. The music by A R Rahman is inspiring, but definitely not his best work. Cinematography in a sports movie is the key to a convincing movie, and this film fares well there. The editing is good, too.

Some sports movies are so action-packed that you never know where the time went, and others require immense patience because you know that a happy ending is your reward. Million Dollar Arm falls in the latter category. It is a film about aspirations and dedication, and, like we mentioned, will be inspiring to many youngsters. We just wish it was grittier.
Share. Save. Connect.
Tweet
MILLION DOLLAR ARM SNAPSHOT 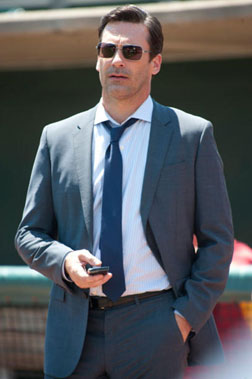 ADVERTISEMENT
This page was tagged for
Million Dollar Arm english movie
Million Dollar Arm reviews
release date
Jon Hamm, Pitobash
theatres list
Follow @fullhyderabad
Follow fullhyd.com on
About Hyderabad
The Hyderabad Community
Improve fullhyd.com
More
Our Other Local Guides
Our other sites
© Copyright 1999-2009 LRR Technologies (Hyderabad), Pvt Ltd. All rights reserved. fullhyd, fullhyderabad, Welcome To The Neighbourhood are trademarks of LRR Technologies (Hyderabad) Pvt Ltd. The textual, graphic, audio and audiovisual material in this site is protected by copyright law. You may not copy, distribute, or use this material except as necessary for your personal, non-commercial use. Any trademarks are the properties of their respective owners. More on Hyderabad, India. Jobs in Hyderabad.