The A Team Review 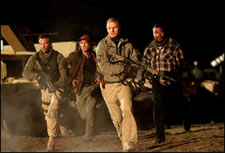 Samrat Sharma / fullhyd.com
EDITOR RATING
6.5
Performances
Script
Music/Soundtrack
Visuals
7.0
5.5
7.0
7.5
Suggestions
Can watch again
Yes
Good for kids
No
Good for dates
No
Wait to rent it
No
The problem with most stupid action blockbusters is that they think you're stupid and take the "stupid" moniker to mean that it is you who is responsible to stoop to their levels. The A-Team is a completely other kind of stupid summer action film - it respects you, and makes an effort to engage and lead you through certain visual cues to attempt and hide the impossibilities that such a film carries with it.

I was never especially a fan of the TV show the film is based on, but thankfully, Joe Carnahan and his writers seem to think that there is a hidden back-story of the coming together and lawlessness of the gang that is more interesting than the actual adventuring that they get to, and the film comes alive with a continuously forward-moving pace.

It is legitimately fun, manic and completely gleeful in its own mad stunts as a film, and relentlessly keeps the momentum and the action going. Such a film can never succeed without a strong cast, and thankfully, the casting is spot on. Sharlto Copley has a hugely fun time doing different accents (mostly to disguise his fake American one) and being a goof, while the rest of the cast does what it does. Quinton Jackson is as serviceable as Mr. T was, and while he is not a revelation, he is still all charisma and fun.

This neatly serves as a foil for what is the heart of the film - the chemistry between Liam Neeson and Bradley Cooper. The film charts the 4 leads as they take on increasingly dangerous missions and stunts, first to serve their country, and then to exonerate themselves of the false charges under which they get imprisoned. While Murdock (Copley) and B A(Jackson) are the getaway and the muscle, respectively, Hannibal (Neeson) is the brains, and Face (Cooper) is his protege.

It is this relationship that is carefully developed between the completely mental stunts and action sequences, and culminates in a plan that Face masterminds - completing the training that Murdock has been imparting since. Cooper has an author backed role, and he runs with it. He is all charm on all cylinders, and you cannot help but smile with him as he howls with gleeful manic laughter as the insanity is turned to 11.

Liam Neeson is increasingly becoming the sort of actor who can do any role in any sort of film, and this is his take on a tent pole actioner. He does not disappoint. His Hannibal is responsible, suave, and a natural leader, with a flair for the ridiculous, which suits the film completely.

Brian Bloom and Patrick Wilson get some very nice character beats near the end of the second act, and they take it to a fun, fresh place. The film is full of moments like these - unexpected beats of levity and character-building in the middle of all the mad action.

And what action it is. Joe Carnahan gets to really showcase his energy and ability here, but the editing is the real star here. Inter-cutting between the plan and the execution, each sequence has a breathless energy, and showcases the best of the execution. There is a very nice heist vibe to the proceedings, which aid the lighthearted-ness of the film.

Ultimately if the film is undone, it is in the other actors (Jessica Biel, for one) who don't really add anything to the film and feel like fat in an otherwise lean film; and the final act. The final act is an incoherent mess, and while Patrick Wilson tries to save it with his goofy child-like beats, it really undermines the good work that had been done since the film started.

Even with the messy and non-cathartic final act, this is a big, silly, well-done fun summer film, and I completely dug it. It's not perfect, but it is a better made film than a lot of other action films, and worth a dekko.
Share. Save. Connect.
Tweet
THE A TEAM SNAPSHOT

ADVERTISEMENT
This page was tagged for
The A Team english movie
The A Team reviews
release date
Liam Neeson, Bradley Cooper
theatres list
Follow @fullhyderabad
Follow fullhyd.com on
About Hyderabad
The Hyderabad Community
Improve fullhyd.com
More
Our Other Local Guides
Our other sites
© Copyright 1999-2009 LRR Technologies (Hyderabad), Pvt Ltd. All rights reserved. fullhyd, fullhyderabad, Welcome To The Neighbourhood are trademarks of LRR Technologies (Hyderabad) Pvt Ltd. The textual, graphic, audio and audiovisual material in this site is protected by copyright law. You may not copy, distribute, or use this material except as necessary for your personal, non-commercial use. Any trademarks are the properties of their respective owners. More on Hyderabad, India. Jobs in Hyderabad.