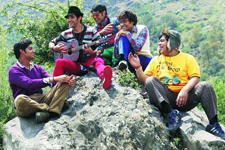 Nupur Barua / fullhyd.com
EDITOR RATING
3.0
Performances
Script
Music/Soundtrack
Visuals
5.0
3.0
5.0
5.0
Suggestions
Can watch again
No
Good for kids
No
Good for dates
Yes
Wait to rent it
No
If you are a film buff who believes that coming-of-age movies in Hollywood are very different from those in Bollywood (some may consider the former superior), we suggest you explore yet another dimension in the genre - Purani Jeans. A movie so exclusively wannabe that you can, at the end of it, only marvel at the investors who risked their money (and admire their suicidal business sense) to make it happen. And you finally realise why Mulayam Singh Yadav said, recently, that boys will be boys.

Considering that the director is a woman, you may experience some confusion over the indulgence blatant in the movie, but remember, this is India, where boys should and will go out and do their bit, while girls hang on to their virginity for those same boys.

There's something about the 1990s and love triangles that just refuses to die. A group of fun-loving young boys have, well, fun together in the sleepy Kasauli - they are friends sworn to eternal loyalty, and they call themselves the Kasauli Cowboys. Like all small-town boys, they live in their own bubble, and make rules about their group - chief amongst them being the need to marry a virgin and making a pass at another cowboy's girl being anathema.

Amongst these boys, two are closer to each other than they are to the rest - Sam (Aditya Seal) and Sid (Tanuj Virwani). After a suitable period of "woo-hooing" across town, they manage to fall for the same girl, Nayantara (Izabelle Leite). Egos clash, betrayals abound, and everybody is forced to take sides.

The boys' mothers (Rati Agnihotri and Sarika) try to console their sons for what they admit is "a part of growing up", but the damage is done. Now, so many years later, Sid looks back at that period in their lives.

The first word that jumps out at you when the movie begins is "predictable", which itself is an understatement. Intense relationships (in this case, between Sam and Sid) will always be torn apart, and growing up will always mean loss. The writer (who is also the director) spends too much time establishing just how close these cowboys are, therefore making them do inane stuff like making pledges to remain friends forever and all that jazz. When the love triangle does happen, the lack of honesty between friends is therefore all the more astounding.

The concept of love conquering all is an outdated one, but can be forgiven here, since everything else is so outdated anyway, and it is the 1990s, the pre-Internet days. Unlike some great coming-of-age movie, however, the depth is missing. It is obvious that the writer is heavily influenced by movies like The Summer Of 42, and other similar stories, but at no point will you feel either sympathy or empathy for any of the characters.

The dialogues do not help much either. The "virgin" bit is definitely offensive, especially when the main characters endorse those views on a woman's eligibility. The rich versus poor (roughly speaking) scenario between Sam and Sid does not make sense, and neither do the roles that their mothers play on them. And finally, the object of their desire, and therefore rivalry, is too shallow for the audience to take sides with either one or the other. It is a pointless love triangle, and even the friendship between the boys is quite unconvincing.

Tanuj Virwani is all about expressions - unfortunately, they appear in the wrong places at the wrong time. He is not too attuned to the idea of acting, it seems, and with this movie being his second after Love U Soniyo, one hopes (for his mother's sake) that he is given at least one more chance before we can completely write him off. Aditya Seal, who once played an adolescent teenager in lust with Manisha Koirala in Ek Choti Si Love Story, is the only young cast member to make a mark. He tries his best to redeem the movie with his sincerity.

Izabelle Leite is best known for her affairs with Virat Kohli and Siddharth Malhotra, and then a little for her modelling. She cannot act, and the overdubbed voice does not suit her at all (which is not her fault, but it makes her look very awkward). She manages to look pretty, as long as she does not have to portray emotions.

Rati Agnihotri and Sarika are in their element, and they shine in this movie that has no other real actors. However, their roles are staid and OTT, and it is a pity that they have to overact in certain sequences.

The production design department does not try too hard to recreate the 1990s, and it shows. They are probably under the impression that not much has changed in the hill town in 20 years, and they are probably right, but the lighting and the visuals do not create nostalgia.

The costume design is relatively better, but sometimes overdone. The camera work is impressive, and the editing is effective enough. It is the music that is disappointing, considering Ram Sampath is the music director. The melodies are pleasant, true, but nothing is memorable about the songs.

Young love and growing up are not easy, and they have been the subject of many books and films. Every filmmaker and every film watcher worth his salt is an expert on this, and unless somebody has something new to say, movies like Purani Jeans should not be made a big deal of. This one is easily avoidable, and one hopes that in the future, investors will not discard better stories in favour of half-baked ones such as this.
Share. Save. Connect.
Tweet
PURANI JEANS SNAPSHOT 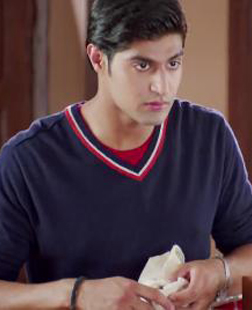 ADVERTISEMENT
This page was tagged for
purani jeans hindi movies
Purani Jeans hindi movie
Purani Jeans reviews
release date
Tanuj Virwani, Aditya Seal
Follow @fullhyderabad
Follow fullhyd.com on
About Hyderabad
The Hyderabad Community
Improve fullhyd.com
More
Our Other Local Guides
Our other sites
© Copyright 1999-2009 LRR Technologies (Hyderabad), Pvt Ltd. All rights reserved. fullhyd, fullhyderabad, Welcome To The Neighbourhood are trademarks of LRR Technologies (Hyderabad) Pvt Ltd. The textual, graphic, audio and audiovisual material in this site is protected by copyright law. You may not copy, distribute, or use this material except as necessary for your personal, non-commercial use. Any trademarks are the properties of their respective owners. More on Hyderabad, India. Jobs in Hyderabad.