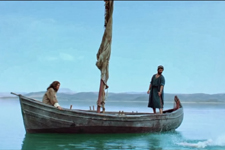 Kritika Deval / fullhyd.com
EDITOR RATING
4.0
Performances
Script
Music/Soundtrack
Visuals
4.5
4.5
3.5
4.0
Suggestions
Can watch again
No
Good for kids
Yes
Good for dates
No
Wait for OTT
Yes
An adaptation of the New Testament half of a TV mini-series called The Bible, Son Of God skips scenes and major plot points in the most popular book in all of history until you have a sanitized version of the story of Jesus that would put a children's version of the New Testament to shame. But, only during the first half.

Most of you have probably at least passing familiarity with the story of Jesus (played by Diogo Morgado here) - he was born of a virgin mother, Mary (Roma Downey), in Jerusalem as prophesied, grew up to travel back there and started "forgiving" people and collecting disciples, which upset the Pharisees (sort of Jewish political high priests) and the Roman Emperor Pontius Pilate (Greg Hicks). He was then arrested a day before the Jewish festival of Passover - and that is where we finish one half of the film.

You could catch something similar on the Discovery Channel (back when they weren't so obsessed with the heathenish practice of citizen ghost-busting) and save yourself about an hour and a solid Rs. 150. Also, you could get out of more than an hour of watching a man being gratuitously tortured.

There is so much that happens in Jesus' life that has been skipped because of the makers' focus on the crucifixion. Jesus' journey on foot to Jerusalem is pretty much ignored. The rest of his life, up until the Last Meal, where Jesus announces the last meal, is basically a montage of a Wikipedia page on Jesus, only in badly rendered motion picture.

While the performances are more than competent, the cast being the original one from the History Channel mini-series, the film itself barely qualifies for that word. This is no fresh take on the story of the Son Of God, nor is it something that would stir any kind of fervour except, perhaps, the fervour of boredom - like when you take Lord Of The Rings and have a well-meaning teacher read it out loud in class for the first time to get his students interested.

The imagery is too run-down even for TV, and Hans Zimmerman's soundtrack sounds like a series stock music on SoundCloud slapped together.

The only saving grace is that the movie seems to have its target audience all sorted out - those who sincerely want a more entertaining alternative to Sunday School. But if you are, say, someone who is of another faith or an agnostic / atheist, looking for an interpretation of Christianity that will make you think, this is maybe not it. If you just want to know more about Jesus' life, go look for that Wikipedia article we mentioned above.

If, on the other hand, you just want to watch a good movie, it seems you're out of luck this weekend, boyo.
Share. Save. Connect.
Tweet
SON OF GOD (TELUGU) SNAPSHOT 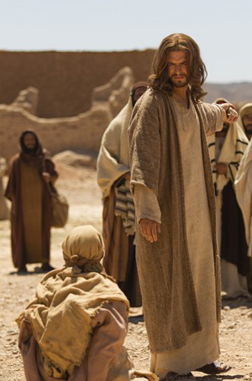