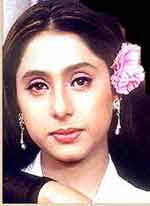 And talking of applications, let's look at a few as far as this home video is concerned.
It could be used in the following training workshops:

1. Mistakes you shouldn't make while making a movie
2. How to make movies from money saved in a piggy bank
3. Innovative lingerie advertising

Seriously, this isn't a review, it is a statutory warning. If you don't skip out on this flick, you'll turn into a mass murderer with a taste for B-grade movie directors. Let's follow the warning up with sufficient reason.

Damini (Sanobar Kabir), married to an auto-driver (Vinay Anand), raped by a rich brat (Rajat Bedi) and two others, and re-married to the rich brat's dad (Alok Nath), finally gets tired of it all and kills half the cast (who all incidentally raped her). She doesn't kill her hubbie 'cos he was already murdered, and she doesn't kill her second husband 'cos she is jailed as soon as she kills her stepson (the brat). So the rapists are killed and the murderer is jailed. End of story.

We shall now look at some of the points in the movie that defy all logic and reason. The murdered auto-driver loves his wife so much that he refuses to decompose till his wife avenges his death in a painstaking manner and then lights his pyre. Talk about burning passion!

The main villain, Rajat Bedi, misses out on getting killed in the first attempt after his teammates are finished off by the lady. The lady is arrested, and then is allowed to light her ex-hubbie's funeral pyre. The idiot reaches there to give her a second chance, and this time she successfully puts a full stop to his dubious career (in the presence of half the police force of Mumbai).

The girl insists on wearing miniskirts that are short enough to enable us appreciate her favorite brand of lingerie, till her hubbie is killed. Then she goes into mourning and wears saris.

The director actually saves out on the fees of the editor and the cinematographer, and I think the music director, too (despite three names given as music directors - Amar, Akbar and Roy Chatterjee - duh!) 'cos there's just nothing in any of those departments! The music is tinny, and sounds like it was rendered by a shaadi ka band. The dances are just see test how far up skirts can go. And I hope you notice that I don't talk about the acting.

Just in case you miss the point of this whole review... you'd can burn your lungs out with cigarettes, rot your liver away with booze or fog your brains up with pot... just don't abuse yourself with junk like this!
Share. Save. Connect.
Tweet
ANGAAR SNAPSHOT

ADVERTISEMENT
This page was tagged for
angaar full movi rajat bedi ki
Angaar hindi movie
Angaar reviews
release date
Rajat Bedi, Vinay Anand
Follow @fullhyderabad
Follow fullhyd.com on
About Hyderabad
The Hyderabad Community
Improve fullhyd.com
More
Our Other Local Guides
Our other sites
© Copyright 1999-2009 LRR Technologies (Hyderabad), Pvt Ltd. All rights reserved. fullhyd, fullhyderabad, Welcome To The Neighbourhood are trademarks of LRR Technologies (Hyderabad) Pvt Ltd. The textual, graphic, audio and audiovisual material in this site is protected by copyright law. You may not copy, distribute, or use this material except as necessary for your personal, non-commercial use. Any trademarks are the properties of their respective owners. More on Hyderabad, India. Jobs in Hyderabad.