Satyame Shivam, written by Kamal, is invaluable as it tries to throw light on the devastating effects of malevolent capitalism and self-centeredness (and consequent indifference towards the welfare of the society), which for years beyond number have affected millions of lives. Going by appearances, it seems like the director-writer duo (Sunder-Kamal) wish to stem the proliferation of these in society, if not completely eradicate them, by means of their latest socio-fantasy on celluloid.

Madan (Kamal) and Satyanand (Madhavan), two guys with perfectly contrasting characters, are thrown into a situation (floods at Bhubhaneshwar) that forces bonding between them. Madan is a

selfless factory worker who is fighting the system to bring justice to his co-workers. He even sacrifices his love for Bala (Kiran Rathod) for the good of his co-workers. On the other hand, Satyanand is a very self-centered ad filmmaker, who is forced to stay with Madan due to floods but soon realizes the greatness of the latter. From then on it is all about how Madan achieves his goal, preaches to everyone "Love is God", and how in so doing earns Satyanand's admiration.

In an opening sequence (a street play against capitalism), Kamal establishes Madan's "character", and from then on keeps reiterating it, which allows the audience to observe and assimilate Madan's thought process. Then on, Madan is able to take the audience along with him, as his problems gradually begin to unfold.

In so doing, he effectively illustrates how his problem evolves, instead of merely explaining the problem and addressing it straight out, which helps in heightening the viewer's emotional participation, ultimately enhancing the impact of the film. As Madan, Kamal, gives out a dazzling performance, establishing the authenticity of Madan's character with a very straightforward portrayal. He never attempts to get around the flaws of Madan. Instead, he uses the flaws to create a character that is simply superb, which makes the character all the more believable. The supporting cast that includes Madhavan, Kiran Rathod, Nazar, portray respective characters effectively, seamlessly complementing Madan's role. 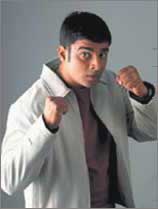 ADVERTISEMENT
This page was tagged for
satyame shivam movie telugu
satyame shivam full movie download
satyame shivam movie whatsapp status
satyame shivam telugu movie
kamal hassan telugu movie sathyame shvam
Follow @fullhyderabad
Follow fullhyd.com on
About Hyderabad
The Hyderabad Community
Improve fullhyd.com
More
Our Other Local Guides
Our other sites
© Copyright 1999-2009 LRR Technologies (Hyderabad), Pvt Ltd. All rights reserved. fullhyd, fullhyderabad, Welcome To The Neighbourhood are trademarks of LRR Technologies (Hyderabad) Pvt Ltd. The textual, graphic, audio and audiovisual material in this site is protected by copyright law. You may not copy, distribute, or use this material except as necessary for your personal, non-commercial use. Any trademarks are the properties of their respective owners. More on Hyderabad, India. Jobs in Hyderabad.