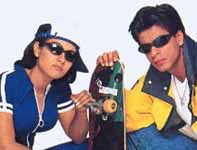 Rachana Gollapudi / fullhyd.com
EDITOR RATING
8.0
Performances
Script
Music/Soundtrack
Visuals
NA
NA
NA
NA
Suggestions
Can watch again
NA
Good for kids
NA
Good for dates
NA
Wait for OTT
NA
It's very rare that commercial films with no storyline to speak of start off to rave reviews from the fiercest of film critics, and Kuch Kuch Hota Hai is one film we're bound to discuss for years to come. With the right mixture of emotion, love and relationships (not to speak color and fashion), the film set box-offices across the country dancing away to the sweet jingle of pouring mammon.

You could summarize the story in two sentences, but it was the presentation, the emoting, the star cast and the vibrancy that made all the difference. It was all the small things of boy-girl friendship in a campus that can only be imagined that got people in droves to the theaters to vicariously live out their favorite fantasies. The country went ga-ga over the songs and the stars, and Shahrukh became a true superstar. (And, as we write this, it was also Shah Rukh's last hit!)

Rahul (Shah Rukh) and Anjali (Kajol) are the best of friends and have their regular dose of fighting and making up. But then young hearts can't keep quiet for long, can they? So, Anjali falls in love with Rahul and he in turn with Tina (Rani). Tina is sexy but not indecent, and sweet but mature unlike Anjali who is a bit childish and more than a bit boyish. So, Anjali goes backstage as Rahul proposes to Tina. She comes out eight years later engaged to Aman (Salman) only to meet Rahul again and to discover that Tina's no more.

Shah Rukh is brilliant as the young widower and a single parent with a child to care for. The first half of the movie has him jumping and running behind babes, and later you see him playing Mr. Responsible with all the dignity it calls for. And the, when he meets Anjali again, the college boy comes out, only, this time, clad in designer wear. He brings out the emotions of love and the awkward moments of the reunion of estranged fast friends in a touching manner, and is sure to take your heart away.

Kajol's histrionics need no introduction. You can almost feel Anjali's pain when she is rejected in love. KKHH is perhaps going to stay Kajol's most memorable performance. Rani is someone you should watch out for, she just takes your breath away in those skimpy clothes! Yet, despite coming in as a glamour doll, she performs well for a (then) newcomer.

Karan Johar has written the dialogues, scripted the story and directed the movie, and, needless to stay, has done an amazing job of it. He lived up to all expectations, and, true to his family name, made a movie that touched millions of hearts. The music is foot-tapping and has captured the imagination of the youngsters. If you haven't seen this movie as yet, then you have missed something.
Share. Save. Connect.
Tweet
KUCH KUCH HOTA HAI SNAPSHOT

ADVERTISEMENT
This page was tagged for
Kuch Kuch Hota Hai hindi movie
Kuch Kuch Hota Hai reviews
release date
Shah Rukh Khan, Kajol
theatres list
Follow @fullhyderabad
Follow fullhyd.com on
About Hyderabad
The Hyderabad Community
Improve fullhyd.com
More
Our Other Local Guides
Our other sites
© Copyright 1999-2009 LRR Technologies (Hyderabad), Pvt Ltd. All rights reserved. fullhyd, fullhyderabad, Welcome To The Neighbourhood are trademarks of LRR Technologies (Hyderabad) Pvt Ltd. The textual, graphic, audio and audiovisual material in this site is protected by copyright law. You may not copy, distribute, or use this material except as necessary for your personal, non-commercial use. Any trademarks are the properties of their respective owners. More on Hyderabad, India. Jobs in Hyderabad.