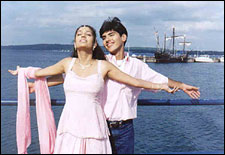 Ajay Bhashyam / fullhyd.com
EDITOR RATING
1.0
Performances
Script
Music/Soundtrack
Visuals
NA
NA
NA
NA
Suggestions
Can watch again
NA
Good for kids
NA
Good for dates
NA
Wait for OTT
NA
Forget all that you thought you knew about filmi clichés - I just found the mother lode. The producers must really take our intelligence for granted. They were just dying to tell us that this is all about 'a teenage love story in American campus'. No, Mr. Producer, I don't really think the audience came expecting to see a coupla oldies romancing it up in Annavaram. That could've saved a few extra bucks on ink, seeing every effort was made to try and keep the costs below the annual pocket money of a 12-year-old.

Balu (Dhyan) is the average village dude whose astute teacher gets him onto an exchange program to Amreeka, because he can play the flute. Praise the Lord! What were we thinking? What a waste of those bloody long hours at the visa office, or those years toiling away at coaching classes or the country's elite engineering colleges. I have seen the light - pick piece of wood, make holes, make noise, catch flight!

Anyway, he lands and is immediately severely afflicted by the Alice-In-Wonderland syndrome, starting with various toilet equipment. Give me strength!

Chitra (Deepali) is the daughter of emigrant parents, and Balu's classmate. A little two-wheeler thieving later, crazy Cupid scores. Let the clichés begin! Girlu's parentsu opposu. Whiteys maketh the funnu of Indian boyi. Song-dance, boy's clash with girl's parents... ohhh, the list is endless and just listing them out is getting on my nerves. The ending is only happy because it means one of our own clichés - that you can now leave the theater.

Films Division documentaries would give Love In America tough competition at the box office, or anywhere else for that matter. Watching snails do the London marathon might be more interesting and definitely more rewarding. My left shoe might have had more acting talent than some of the people on show, though Deepali wasn't half bad. She can act to save her skin.

When Bhuvanachandra switched on the radio one fine day, he thought to himself, "Hey! That's not so bad!" And so we have twinkle twinkle music for the most part. Choreography??? AAAAARGGGHHH! Some moments actually made me physically sick. For example, there's a song which goes "Cars! Cars! Cars! I want cars!" and we're shown a few parking lots and a junkyard. This pretentious crap is not even worth half the headache.

ADVERTISEMENT
This page was tagged for
Love in america Movie
Ameria love movie
love in america telugu movie
American Telugu movies
America Telugu movie
Follow @fullhyderabad
Follow fullhyd.com on
About Hyderabad
The Hyderabad Community
Improve fullhyd.com
More
Our Other Local Guides
Our other sites
© Copyright 1999-2009 LRR Technologies (Hyderabad), Pvt Ltd. All rights reserved. fullhyd, fullhyderabad, Welcome To The Neighbourhood are trademarks of LRR Technologies (Hyderabad) Pvt Ltd. The textual, graphic, audio and audiovisual material in this site is protected by copyright law. You may not copy, distribute, or use this material except as necessary for your personal, non-commercial use. Any trademarks are the properties of their respective owners. More on Hyderabad, India. Jobs in Hyderabad.