Margarita With A Straw Review 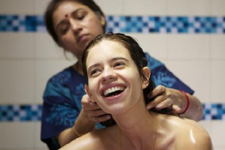 Nupur Barua / fullhyd.com
EDITOR RATING
6.0
Performances
Script
Music/Soundtrack
Visuals
8.0
6.0
6.0
7.0
Suggestions
Can watch again
Yes
Good for kids
No
Good for dates
No
Wait for OTT
No
Margarita With A Straw - that is how the protagonist likes to drink her new favourite cocktail, what with her cerebral palsy hampering her motor movements. As director Shonali Bose says in her interviews, just because a person is differently abled does not mean that he or she is abnormal. And Bose's lead character has the same angsts and anxieties that most people her age experience, and the same curiosity and need to experiment. This is a coming-of-age movie, with a slightly different perspective than we have been used to thus far.

Laila (Kalki Koechlin) may never have survived infanthood if it were not for her feisty, strong-willed mother (Revathi), a woman who runs the household with a strict but also indulgent iron hand. Laila attends a college in Delhi University, and her best friend is Dhruv (Hussain Dalal), who is similarly wheelchair-ridden. Dhruv and Laila steal kisses and make out in the library, but Laila decides that they should put a stop to it, and Dhruv derides her for wanting to be "normal".

Laila writes lyrics for one of the college bands, and is secretly in love with the lead singer Nima (Tenzing Dalha). When the band wins a prize in a competition, thanks to the lyrics of the song by Kalki, she decides, in a vulnerable moment, to be honest with her feelings. Nima politely rejects her, without a word, and Laila is heartbroken. Which is when her mother decides to let her attend NYU, New York. There, Laila learns how to be independent, to begin with, but she also experiments with her sexuality, as she comes to terms with the fact that she may be bisexual. Khanum (Sayani Gupta) becomes her best friend, and Jared (William Mosely) her best guy friend.

However, things are not so great back home, as Laila discovers only when she visits, with Khanum, during a summer break. She is also faced with the dilemma of admitting her preferences to her mother, with whom she has always shared all her secrets. Life becomes a little more complicated as Laila finally learns to embrace herself and who she really is.

The director also brings to light the fact that no matter how much we have matured in our interactions with differently-abled people, we still treat them, well, differently. And this is more apparent when Laila moves to New York, where she becomes just another regular Joe, wheelchair notwithstanding - whether it is the attitude of the people around her, or the public transport and other facilities that make life easier for her to move around. The director does stress the need for us to not treat people like Laila with any prejudice, and it begins with home. Her family is very matter-of-fact about helping her out physically, and she does not feel like a burden.

The problem with the story is that nothing else happens in the movie. Once Laila's character and relationships are established, the screenplay stagnates, and the only movement forward comes through a series of convenient plot points. Meeting Khanum for the first time, for example, is an amateurishly contrived plot. The relationship between the two girls, besides the initial lovemaking scene, is never shown as intense and exciting, except when Laila admits that she is scared of the way she feels.

Also, the ailment in the family seems specifically convoluted to fill in the gap between the intermission and the end, since nothing else seems to be going on. And the only NYU classroom sequence is placed just to introduce a character, and Laila's choice of subject - creative writing - is neither explained nor explored, which is strange, since the initial portion of the movie drills into our head the fact that she is some kind of prodigy as a music composer (a point that is not taken up later).

There is some humour in a couple of dialogues and situations, but it is not consistent, and seems more like an afterthought (to play to the gallery, as it were), and wears thin after a point. The script just jumps from one unrelated sequence to another in no clear direction. The second half drags, miserably, and the resolution seems rather pretentious.

Despite the definite lack of interest that you may feel a little after the intermission, you still cannot walk out of the movie - because of Kalki Koechlin. With her gamine face, frail constitution and infectious smile, she becomes Laila effortlessly. It is a known fact that this was a difficult role for her to play, both emotionally and physically, especially the latter. She never shows it. People unfamiliar with her work may believe that she actually has cerebral palsy. Koechlin does not allow you to look away from her, filling the screen with her presence, and you hardly notice that the story is not moving forward. Her dialogues are sub-titled so that you can understand what she says. She does not slip up even once in her depiction of Laila, even though the way her character is written is not very convincing at times.

Revathi is the only other actor who can steal a bit of the limelight away from Koechlin. Revathi's restrained performance with small emotional outbursts is commendable. Sayani Gupta leaves a mark, but has a long way to go. Hussain Dalal, Kuljeet Singh and Malhar Khushu manage to tug at your heartstrings, despite their relatively shorter roles. Tenzing Dhala is not the best choice to play an Assamese boy, and his noticeable non-Assamese accent gives him away. William Mosely, famous as the oldest of four siblings in the Narnia movies, deserved a lengthier role.

The production design in the movie is elegant and authentic, whether it is Delhi or New York. The palette is all warm and cosy, even when during the snow and rain sequences. Books and libraries are recurrent motifs, although Laila is not really a bookworm. The sturdy, utilitarian family van is a delight, even though it may seem like a bit of a stretch for the crowded Delhi roads. The costumes are everyday, regular wear, and the only slightly outlandish clothes belong to Khanum.

The movie has only one full song, Dusokute, which is a Hindi version of an Assamese song sung by Joi Barua. It plays out without warning, and is actually quite catchy. The background music for the rest of the movie is average.

The cinematographer emphasises on deglamourized shots of Delhi, but not in a very arty way. The New York visuals are comparatively impersonal, but also deglamourized to an extent.

The editing could have been much, much sharper, to make the story, or lack of it, move faster. The movie is not too lengthy, but it seems that way towards the end.

Margarita With A Straw can be summed up in one phrase - check out Kalki Koechlin. This has to be the role of a lifetime for her, and she has never been so endearing. Shonali Bose tries to bring to our notice an important element of society - the differently-abled community - but she does not make it too indulgent as far as sympathy is concerned. Definitely worth one watch, but only if you have the patience.
Share. Save. Connect.
Tweet
MARGARITA WITH A STRAW SNAPSHOT 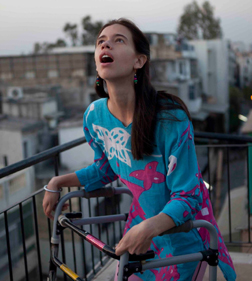 ADVERTISEMENT
This page was tagged for
Margarita With A Straw hindi movie
Margarita With A Straw reviews
release date
Kalki Koechlin, Revathi
theatres list
Follow @fullhyderabad
Follow fullhyd.com on
About Hyderabad
The Hyderabad Community
Improve fullhyd.com
More
Our Other Local Guides
Our other sites
© Copyright 1999-2009 LRR Technologies (Hyderabad), Pvt Ltd. All rights reserved. fullhyd, fullhyderabad, Welcome To The Neighbourhood are trademarks of LRR Technologies (Hyderabad) Pvt Ltd. The textual, graphic, audio and audiovisual material in this site is protected by copyright law. You may not copy, distribute, or use this material except as necessary for your personal, non-commercial use. Any trademarks are the properties of their respective owners. More on Hyderabad, India. Jobs in Hyderabad.