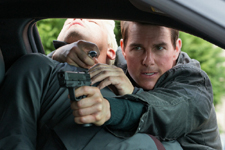 Ajay Kumar R / fullhyd.com
EDITOR RATING
7.0
Performances
Script
Music/Soundtrack
Visuals
9.0
5.0
7.0
8.0
Suggestions
Can watch again
Yes
Good for kids
No
Good for dates
No
Wait to rent it
No
The solemn yet mean killing machine Jack Reacher, played by Tom Cruise, is back in action with Edward Zwick's second installment of the action thriller franchise, Jack Reacher 2: Never Go Back. Based on British thriller novelist Lee Child's 18th novel of the series by the same name, Jack Reacher is about a homeless retired US Army official who hitchhikes throughout the country seeking justice, which often involves solving crimes and kicking butt in extremely perilous situations.

Four years after the events of the first movie, Jack Reacher, a drifter and former Military Police officer with nothing but a toothbrush to his name, is returning to Washington to meet old buddy and colleague Major Susan Turner (Cobie Smulders) for a dinner date. Upon reaching DC, he finds from Colonel Morgan (Holt McCallany) that Turner has been arrested for treason. Knowing Turner's record and honest conduct, Reacher suspects foul play, and attempts to prove her innocence, in his own way.

While on the job, things get complicated as he is slapped with a paternity suit by a waitress somewhere in DC who claims that he had knocked her up 15 years ago, and who is now with teenage daughter Samantha Dayton (Danika Yarosh). To makes things even worse, he is also charged with the murder of Turner's lawyer, and also a 16-year-old crime.

But Reacher's problems do not end there. He soon finds out that the charges of espionage against Turner are far off from the truth, and are actually a cover-up for the illegal arms deal between power-hungry defense contractor General Harkness (Robert Knepper) and an insurgent group in Afghanistan. Reacher also discovers that Harkness is aware of him and his illegitimate daughter - who is also on the hit list - and is tailing him round the clock with the help of an assassin named The Hunter (Patrick Heusinger).

Never Go Back portrays the life of a lone vigilante vagrant out to seek justice from a system that cannot care less, in an inertly formulaic way. It leaves a lot of gaps and does not show how the "system" works or the extent of corruption within the ranks that led to the unlawful operations. It rather focuses on how the protagonists shoots and punches his way to justice. Moreover, everybody cares about lone hero-vigilante drifters - but a lone hero-vigilante drifter surrogate parent? Not so much.

But Director Edward Zwick, who also helmed Tom Cruise's The Last Samurai (2003), neatly patches up the plot holes and other shortcomings of Never Go Back by giving the audience what they entered the cinema for - Smulders, Cruise and raw action.

Tom Cruise effaces his million-dollar smile and smoulders with a hauntingly cold glare throughout the film. The 54-year-old star still packs a hard punch. He is one of the few actors who can pull off brilliant emoting amid a generic script and character, and make them interesting. His fight sequences seem flawless and powerful.

How I Met Your Mother, Avengers and Agents Of S.H.I.E.L.D. fame Cobie Smulders delivers brilliantly in a role that she had reportedly been waiting for since playing Agent Maria Hill in S.H.I.E.L.D. She slithers like a snake in water through the crutches of the enemy and flaunts those blows and kicks like a ninja.

Danika Yarosh does a very good job as a teenager who has run all her life from foster home to foster home, only to run again, this time for her life.

Robert Knepper, who played T-Bag in popular TV series Prison Break, is the obvious villain. I think the audience would confuse him with being the villain even if he played the good guy. Unfortunately, he has little to no role in this film. Patrick Heusinger, too, emotes well as a rogue assassin, but has little prominence.

The music (Henry Jackman) fits the tone of the movie. 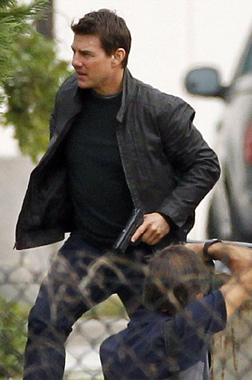 ADVERTISEMENT
This page was tagged for
Jack Reacher: Never Go Back english movie
Jack Reacher: Never Go Back reviews
release date
Tom Cruise, Cobie Smulders
theatres list
Follow @fullhyderabad
Follow fullhyd.com on
About Hyderabad
The Hyderabad Community
Improve fullhyd.com
More
Our Other Local Guides
Our other sites
© Copyright 1999-2009 LRR Technologies (Hyderabad), Pvt Ltd. All rights reserved. fullhyd, fullhyderabad, Welcome To The Neighbourhood are trademarks of LRR Technologies (Hyderabad) Pvt Ltd. The textual, graphic, audio and audiovisual material in this site is protected by copyright law. You may not copy, distribute, or use this material except as necessary for your personal, non-commercial use. Any trademarks are the properties of their respective owners. More on Hyderabad, India. Jobs in Hyderabad.