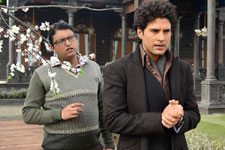 Nupur Barua / fullhyd.com
EDITOR RATING
5.0
Performances
Script
Music/Soundtrack
Visuals
5.0
4.0
5.0
5.0
Suggestions
Can watch again
No
Good for kids
No
Good for dates
Yes
Wait to rent it
No
What is slightly unexpected is the production house that presents Samrat And Co. - Rajshri Productions, best known for mushy family melodramas. Then again, this is the next generation of the Barjatyas that is now running the show, and they appear to have decided that it makes perfect sense to move away from the conventional Rajshri image. Not a great idea, as it turns out, but more on that later.

Kaushik Ghatak has admitted that he "grew up fantasising about the world of Sherlock Holmes". And that it had always been a dream for him to give to the Indian audience a character like Holmes. He dedicates Samrat And Co. to Sir Arthur Conan Doyle, and thanks him for the inspiration. But by the time the movie gets over, you wonder why Ghatak decided to write it, given that it is not his forté, as the movie proves.

Mahendra Pratap Singh (Girish Karnad) lives in a sprawling mansion somewhere in the hills of Himachal Pradesh. His faithful servant Puran (Ravi Jhankal) is quite worried about his master's constant paranoia that makes him sleep with the lights on.

In Mumbai, famous sensationalist TV anchor Chakradhar Pandey a.k.a. CD (Gopal Datt) visits his friend's house only to be told that he is out venting his frustration. CD goes to the boxing ring to look for him, just in time to see him rise from defeat and crush his contender.

The friend is Samrat Tilakdhari a.k.a. STD (Rajeev Khandelwal), and he is a private investigator with the highest intelligence possibly known of. STD needs his fix of cases to solve, but nothing seems to be interesting enough until one day a young girl named Dimpy Singh (Madalasa Sharma) visits him. She is the daughter of the paranoid Mahendra Pratap Singh, and is worried about her father.

First scornful of and then intrigued by Dimpy's story, STD and CD accompany her to Himachal Pradesh, to her house. There they meet her hospitable elder brother Sanjay (Priyanshu Chatterjee), her inhospitable elder brother Vijay (Indraneil Sengupta), her father's manager Deepak (Rajniesh Duggal), and a host of other characters. While the investigator sniffs the dead flowers in the dying garden that is apparently the cause of the deteriorating health of the patriarch, the arrival of a holy man (Ram Gopal Bajaj) creates ripples.

The holy man does what science cannot - he solves the problem that has been plaguing the family, or so it seems. STD and CD have no reason to stay on, but Dimpy asks them to attend her father's grand birthday bash. A song and dance sequence later, Mahendra Pratap Singh is found dead in his room, and the blame falls on the rebellious Vijay. Samrat and CD now have to figure out whodunit, since it cannot be the most obvious suspect, of course.

"This film is not a desi version of Holmes," said Ghatak in a recent interview. He was not being truthful, of course, but it depends on which particular version of Holmes he was referring to. The sequence that introduces us to the protagonist is definitely a lift from the one that has Robert Downey Jr. essaying Sherlock Holmes (2009). Samrat is otherwise the Indian version of the Benedict Cumberbatch version (Sherlock, BBC), from his mop of wavy hair to the stoles around his neck.

CD refers to himself as Watson, so there is no ambiguity there. The character, however, is more Jatayu (from the Feluda series by Satyajit Ray) than Doyle's good doctor. The inane humour is just a side effect of this mash up.

Now on to the story that Kaushik Ghatak wrote and dedicated to Doyle (who has already turned in his grave too many times to be flattered by yet another imitation).

The hint of supernatural happenings in the beginning is just that - a hint. Nothing ever comes out of it. A crazy sister, Divya (Shreya Narayan), is introduced with a soundtrack that seems to come straight out of Mahal and Bees Saal Baad. Suddenly, a number of other characters die, and you begin to wonder if this is, after all, a psycho thriller, with a serial killer. Since the patriarch's death does not seem to disrupt life much, the other murders barely create a ripple (in fact, Dimpy is so surprised that she is not upset, that she even mentions it, waking you up to the unnatural portrayal of the characters).

With names like STD, CD and Dimpy, the characters cannot be too convincing. The writers try to make up for this by giving Samrat extraordinary brainpower, logic be damned. You see, Samrat believes in observations, so he rambles on about dietary habits, travel experiences, social standing, and so on, of every person he meets for the first time. This shows the audience how vigilant he is.

Red herrings are in abundance in the tale. They are to be found everywhere. Most of the screenplay revolves around Samrat looking intelligent as he makes 'tsk' noises with his tongue, and spouts philosophy to his long-suffering sidekick, CD. The various mysteries, when they are solved, leave you flabbergasted (not in a good way). In each sub-plot, the tension is built up without much success to an intended crescendo, and then the climax fizzles out. Ditto for the movie as a whole. The dialogues are verbose, to say the least, and they do not really make much sense.

Kavita Barjatya said, when they announced the movie, "We are selecting every actor with a lot of deliberation." Truth be told, the supporting cast is almost apt - almost, since every frame belongs to the protagonist, and there is not much for the rest to do.

Rajeev Khandelwal, in whom the producer and director spotted a "certain rawness", is thrilled with his role, evidently. He emulates Benedict Cumberbatch, and almost gets away with it. However, his diction leaves a lot to be desired. For one, he speaks too fast, and most of his words are swallowed as he gets carried away by his own intellect. Gopal Datt does not seem very interested in playing the buffoon, and his catchphrase, "The point is..." is rather irritating, even to him.

Madalasa Sharma is, in one word, underwhelming. Her expressions and mannerisms are straight out of a TV family drama. Priyanshu Chatterjee, older and portlier, manages to make a mark. Indraniel Sengupta looks confused, as does Shreya Narayan, who had made quite an impression in Saheb Biwi Aur Gangster. Barkha Bisht Sengupta must have been cast because she wanted to spend some time with her husband, since she does not have more than two lines together.

Ravi Jhankal and Gufi Paintal are wasted, unfortunately - these two senior actors seem more compelling than the rest of the cast. Ditto for Smita Jaykar. Girish Karnad tries playing the respectable intellectual, but seems more senile than extraordinary. Puja Gupta is the comic relief, but she could have done better as a more prominent character. Rajniesh Duggal has the best baritone in the movie, and some weird martial arts moves.

The bane of the movie is the overuse of special effects, and not very nicely done, either - the natural surroundings of Himachal Pradesh could have done without the heavy enhancement. Most of the action takes place in the mansion, and some on the streets. The latter look more realistic, but the lighting in the mansion is flat, which is as much the cinematographer's fault as it is that of the production designers.

The clothes are tacky, and look like they have been put together as a wardrobe in a hurry. The editor obviously could not fit in the entire film in the required time frame, as the resolution of the story runs with the end credits roll. The music is average.

There is not much to be said about Samrat And Co., except that it is a disappointment to crime and mystery buffs. This amateur attempt at the genre leaves a bitter taste in your mouth, and you may not be as welcoming of the next one that comes along. Hopefully, Ghatak will do justice to his characters in a sequel (yes, there is a Moriarty here, too).
Share. Save. Connect.
Tweet
SAMRAT & CO. SNAPSHOT 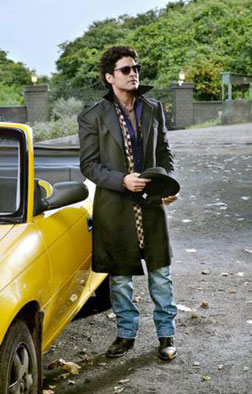 ADVERTISEMENT
This page was tagged for
Samrat & Co. hindi movie
Samrat & Co. reviews
release date
Rajeev Khandelwal, Madalasa Sharma
theatres list
Follow @fullhyderabad
Follow fullhyd.com on
About Hyderabad
The Hyderabad Community
Improve fullhyd.com
More
Our Other Local Guides
Our other sites
© Copyright 1999-2009 LRR Technologies (Hyderabad), Pvt Ltd. All rights reserved. fullhyd, fullhyderabad, Welcome To The Neighbourhood are trademarks of LRR Technologies (Hyderabad) Pvt Ltd. The textual, graphic, audio and audiovisual material in this site is protected by copyright law. You may not copy, distribute, or use this material except as necessary for your personal, non-commercial use. Any trademarks are the properties of their respective owners. More on Hyderabad, India. Jobs in Hyderabad.