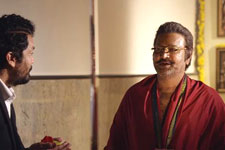 Josh / fullhyd.com
EDITOR RATING
4.0
Performances
Script
Music/Soundtrack
Visuals
7.0
7.0
6.0
5.0
Suggestions
Can watch again
No
Good for kids
No
Good for dates
No
Wait for OTT
Yes
When you think of Pedarayudu, or Alludugaru, or M Dharmaraju MA, or even Veedevadandi Babu, there's that thing that's common to them. No, we know they all star Mohan Babu. We're after something less obvious and, of late, rather elusive - an engaging story with purposeful characters. No matter how high Mohan Babu thinks of himself, he certainly doesn't seem to think of the script as being secondary to him. This, you'll agree, isn't a trait many Telugu stars can claim to possess.

Gayatri, too, comes with an engaging story with purposeful characters. It's a tender tale of a father Dasari Shivaji (Mohan Babu) who is on the search for his long-lost daughter Gayatri (Nikhila Vimal). He knows she's alive and likely in an orphanage somewhere, but all his enquiries end up fruitless. So he just sends money over to all these orphanages across the country hoping at least some of that reaches his child.

But this Dasari Shivaji who's circulating lakhs of rupees across the country is a mere stage artist (even if he's a celebrated one). Naturally, he's upto some funny business if he has to generate enough revenue to disburse it. And that funny business is where he plays stand-in for wealthy people who have to sit in jail in wait of bail. So Shivaji disguises himself to look exactly like his client, goes to jail in place of his client, and waits there for weeks till his client obtains bail.

Both prongs of the premise, the search for the daughter and the shady revenue-generation, are written with care, and multiple characters are brought into the plot - like Anasuya as an investigative journalist, Siva Prasad as Shivaji's loyal aide, Giri as the drunkard friend and so on. All these characters, with the benefit of having a clear purpose, are executed efficiently. Nikhila Vimal, in particular, breezes through her titular role.

While this is how most Telugu films were written and made a couple of decades back, it feels surprising and new to be sitting in a movie hall in 2018 and watching a Telugu film whose star is still trying to be functional within the confines of a story. Mohan Babu doesn't ever lose an opportunity at flourish, and just his dialogue delivery (except for his English "fur-far-mens") is worth the ticket money sometimes. But he diligently puts himself in his role and dutifully makes you feel for him.

But that doesn't make the film work, sadly.

To understand the failure of Gayatri, we'll refer to a recent interview of Madhavan where he says (we paraphrase): "Many filmmakers today hold their mentors' work as the benchmark for themselves. Because they're afraid to explore and experiment, their definition of quality comes from the classics their mentors made. But the audiences have moved on. A film that was a hit two decades back wouldn't cut a two-week run today. So when these guys compare their work with decades-old hits they aren't addressing their current day audiences."

There is no way to verify this counterfactual, but we think Gayatri would have been an easy 50-day run in most centres and a hundred-day run in a handful of them had it been released in 1997. But, for today, you're going to find it a little tedious to watch. The old-fashioned handling of the material automatically makes you sign off, and it's all rather distant except when Mohan Babu's expressive eyes and words catch your attention.

It gets worse with the flashback where Manchu Vishnu plays a younger version of Dasari Shivaji. Mohan Babu, no one will contest, is next to none when it comes to Telugu diction. He performs and speaks like a true celebrated stage artist would. Now when Manchu Vishnu reprises his role, and is even made to deliver a version of the hallowed 'Emantivi Emantivi' monologue, you enter a territory where you aren't sure if your lead is saying lover (cheli) or sister (chelli).

What makes Vishnu's under-acting more unpalatable is having Shriya Saran clap and cheer to it. Saran does her normal shtick within her usual bandwidth, but it feels like such gross over-acting simply because the material she's cheering to is so dismal and disturbing. When that flashback ends you'll be grateful for the very existence of Mohan Babu. From there the film veers to its fascinatingly written but not fashionably made climax.

"Old-fashioned", to some extent, means not having high "production values". So the film is rather ordinary-looking. However, Thaman rises above this ordinariness and pulls off a catchy album (we really liked Hanuma Hanuma), but you know, when Thaman is among the best things of your film, it's perhaps best not to watch it in a theatre.

Some point in the future, when you've forgotten all about Gayatri and you have no expectation from having driven to a hall and spending on a ticket, on one lazy Sunday afternoon, you're likely to catch it on television and feel rather surprised at how engaging a story it is. For that surprise to be effective you may begin working on the forgetting part right away.
Share. Save. Connect.
Tweet
GAYATRI SNAPSHOT 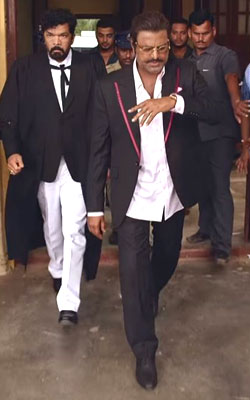 See Gayatri full details
GAYATRI USER REVIEWS
1 - 5 OF 5 COMMENTS
POSITIVE  |  NEGATIVE |  NEWEST  |  OLDEST  |  MOST HELPFUL  |  LEAST HELPFUL
The Common Movie Goer on 14th Feb 2018, 11:26am | Permalink
How dare you talk about Thaman garu like that, Josh? Great review as per uz (usual - trying to sound cool). The only thing I can't comprehend is how Fullhyd reviewers can analyze anything in such detail, let alone something as complex and artistic as a movie.
Josh on 16th Feb 2018, 7:38pm | Permalink
Thanks, dude.

I can't tell if you are insulting or complimenting. And that applies to both us and Thaman :D
Anvesh on 11th Feb 2018, 10:56pm | Permalink
'Some point in the future, when you've forgotten all about Gayatri and you have no expectation from having driven to a hall and spending on a ticket, on one lazy Sunday afternoon, you're likely to catch it on television and feel rather surprised at how engaging a story it is. For that surprise to be effective you may begin working on the forgetting part right away.'
- Beautifully written, Josh.
Josh on 16th Feb 2018, 7:40pm | Permalink
I think this is the second time you are specifically complimenting something I'm myself proud of. Thanks Anvesh :)
Madhu on 11th Feb 2018, 7:48pm | Permalink
Good one Josh, It is unfortunate that some do not understand that histrionics and melodrama are the king and queens of acting.
Josh on 16th Feb 2018, 7:42pm | Permalink
Thanks, Madhu :)
veturisarma on 11th Feb 2018, 3:52am | Permalink
I think fullhyd's 10 point scale is counterproductive. While TholiPrema's 7.5 is a touch too many(it's a 5 on a scale of 10..on that subject one wonders which is the last film to get a 5 on fullhyd), Gayatri is a 5. When I saw Tholi Prema rated 7.5, i Immediately saw who rated it and it was a new reviewer, so I breathed easy
Prahlad on 10th Feb 2018, 3:46pm | Permalink
The only film Mohan Babu acted genuinely in his entire career is RGV's Rowdy(to some extent). Acting is not having clear diction and certainly more than a cheap dramatic dialog delivery(which is non-acting in fact). Mohan Babu is as atrocious an actor as other numerous telugu 'actors' we have seen over decades. I don't understand why the reviewers blindly assume that all veteran actors have crossed a certain invisible high benchmark in acting and come up with silly phrases like "he carried the film......etc" when these so called 'masters' have actually tortured the audience and abused the art of acting for decades(that includes over rated Kamal Hassan even in countless films). Most of these 'greats' are completely clueless about acting and even if they had, they had no roles to act with such terrible scripts anyway. Period.
Josh on 10th Feb 2018, 11:10pm | Permalink
"Ma! They're trying to kick out melodrama and histrionics from performing art again!"
TJ Reddy on 11th Feb 2018, 8:30pm | Permalink
Ha. Sarcasm on point. Well said, dude.
Portuguese Man-of-War on 10th Feb 2018, 5:28pm | Permalink
Very well said
LEAVE A COMMENT
fullhyd.com has 700,000+ monthly visits. Tell Hyderabad what you feel about Gayatri!
MORE MOVIES
Latest Reviews
Macherla Niyojakavargam
Laal Singh Chaddha
Raksha Bandhan
Sita Ramam
DC League Of Super-Pets
more
Bimbisara
Bullet Train
Ramarao On Duty
The Legend
Shamshera
Thank You (Telugu)
Gargi
My Dear Bootham
Shabaash Mithu
HIT: The First Case
Contemporary Reviews
Inttelligent
Tholi Prema (2018)
Pad Man
The 15:17 to Paris
Awe!
more
Manasuku Nachindi
Aiyaary
Phantom Thread
Maze Runner: The Death Cure
Den Of Thieves
Chalo
Touch Chesi Chudu
Bhaagamathie
Padmaavat (Telugu)
Random Reviews
Monsoon Wedding (English)
Be Cool
Harivillu
Dil Jo Bhi Kahey
Shaadi No. 1
more
The Patriot
Laaga Chunari Mein Daag
Billa
Prince Of Persia
Larry Crowne
Gangs Of Wasseypur
The Lone Ranger (Hindi)
Million Dollar Arm
The Sponge Bob Movie: Sponge...
Vadaladu
SEARCH MOVIES
Dissatisfied with the results? Report a problem or error, or add a listing.
ADVERTISEMENT
SHOUTBOX!
{{todo.name}}
{{todo.date}}
[
ip{{todo.ip}}
]
{{ todo.summary }}... expand »
{{ todo.text }} « collapse
First  |  Prev  |   1   2  3  {{current_page-1}}  {{current_page}}  {{current_page+1}}  {{last_page-2}}  {{last_page-1}}  {{last_page}}   |  Next  |  Last
{{todos[0].name}}

ADVERTISEMENT
This page was tagged for
Gayatri telugu movie
Gayatri reviews
release date
Mohan Babu, Manchu Vishnu
theatres list
Follow @fullhyderabad
Follow fullhyd.com on
About Hyderabad
The Hyderabad Community
Improve fullhyd.com
More
Our Other Local Guides
Our other sites
© Copyright 1999-2009 LRR Technologies (Hyderabad), Pvt Ltd. All rights reserved. fullhyd, fullhyderabad, Welcome To The Neighbourhood are trademarks of LRR Technologies (Hyderabad) Pvt Ltd. The textual, graphic, audio and audiovisual material in this site is protected by copyright law. You may not copy, distribute, or use this material except as necessary for your personal, non-commercial use. Any trademarks are the properties of their respective owners. More on Hyderabad, India. Jobs in Hyderabad.