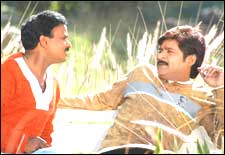 EDITOR RATING
5.0
Performances
Script
Music/Soundtrack
Visuals
NA
NA
NA
NA
Suggestions
Can watch again
NA
Good for kids
NA
Good for dates
NA
Wait for OTT
NA
Venu Madhav has got to be arguably the finest bundle of comic talent to hit the languid Telugu film comic scene in a long time. He'd single-handedly add to the rating of any review of this otherwise blah comedy-of-errors movie. From expressions of deliciously effeminate coyness that make you cackle and clap and sprint all around the theater in ecstasy, to taking himself so seriously that you want to give him an understanding pat and some fresh lemonade, he has a remedy for everything in your life that you thought was important.

It's that over-the-counter effervescence that packs a full-throttle punch into a tale that would normally make it to the DVD stores faster than its own pirated versions. Balu (Venu Madhav) and Badri (Ali) are two semi-disgusting crooks who think parting people from their hard-earned money is a spiritual experience if you look at it the right way, or at least consume the right spirits. They make a virtue of scooting from the right place at the right time, and land up at the exact same spot each evening.

And it is one day at the toddy shop that they meet Venkat (Sunil), a man looking just for them.

There comes a time in every crook's life when he gets the opportunity to use his skills for the ultimate purpose - a compelling mission that will atone for all past wrongdoings and show him a new path to pursue, a mission that gives him a fresh beginning. Unfortunately, this is not such a mission - all Venkat wants them to do is scale new heights in their crookedness by conning the naïve daughters of two rich men and marrying them (the daughters, we mean - this film doesn't cut new ground anywhere).

Never ones to refuse a daunting challenge, or, oh, any task that can earn upwards of 5 bucks (give or take 2 bucks), our two heroes sign up. They both masquerade as the son of the same guy, a certain Bobbili Raja whose net worth is Rs. 1,000 crores. Having never had reason to count above 100 in their lives, the two guys need special classes to understand what 1,000 crores means, but they catch on pretty fast that it must be big, especially when they see the buxom daughters.

The dads, played by Kota and Tanikella Bharani, are sworn enemies, and know this through reliable sources. Each wants his daughter to be married into a rich family to spite the other, and the daughters are pretty neutral to who they are getting married to as long as they are told a couple of days in advance and given the dress code.

Now it's never easy to prove that someone is not your son, especially in this age of computerization and liberalization, but Bobbili Raja does it, and it's bedlam as the people concerned find out that Balu and Badri are actually not heirs to the empire. The rest of the film focuses on the emotional trajectory of men who have just been told that they are not the sons of someone whose sons they want to be. Like you want to know if it was something else.

A good comedy-of-errors tale is one where your audience spends 5 minutes on the way out still thinking about the plot, putting some last pieces together - and not finding anything amiss. Like with an Angoor. Hungama might have been a good movie if it were written and directed by someone with stamina for more thought. You get the feeling that the plot is written, it does not just happen.

Then, several dialogues are a compromise (Dharmavarapu Subrahmanyam has especially corny stuff), and added to the fact that there is nothing really cleverly conceptualized in the big picture, Hungama becomes a film that depends on performances. All performances are good, with, like we noted, Venu Madhav standing out.

Not worth a watch, unless you are desperate to get mildly tickled.

ADVERTISEMENT
This page was tagged for
Hungama Telugu movie review
hungama in telugu
Hungama (Telugu) telugu movie
Hungama (Telugu) reviews
release date
Follow @fullhyderabad
Follow fullhyd.com on
About Hyderabad
The Hyderabad Community
Improve fullhyd.com
More
Our Other Local Guides
Our other sites
© Copyright 1999-2009 LRR Technologies (Hyderabad), Pvt Ltd. All rights reserved. fullhyd, fullhyderabad, Welcome To The Neighbourhood are trademarks of LRR Technologies (Hyderabad) Pvt Ltd. The textual, graphic, audio and audiovisual material in this site is protected by copyright law. You may not copy, distribute, or use this material except as necessary for your personal, non-commercial use. Any trademarks are the properties of their respective owners. More on Hyderabad, India. Jobs in Hyderabad.