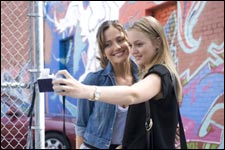 Nupur Barua / fullhyd.com
EDITOR RATING
3.0
Performances
Script
Music/Soundtrack
Visuals
4.0
3.0
3.0
3.0
Suggestions
Can watch again
No
Good for kids
No
Good for dates
Yes
Wait to rent it
No
Way back in the 1990s, there was a movie named Single White Female, where a disturbed Jennifer Jason Leigh became obsessed with her pretty and successful flat mate, played by Bridget Fonda. There was a villain, and a victim, and city girls thought twice before renting a place with another person, even a friend.

More than a decade later, Karan Razdan, in a belated act of inspiration, directed a Hindi remake of the movie. He called it Girlfriend, and he got Isha Koppikar to grunt and act weird in an effort to show her obsession with Amrita Arora. Less than a decade later, we have The Roommate, a rehashed Single White Female, set in a college. A pattern emerges - every decade will have one of those, we presume.

Unlike the original, there is nothing extraordinary about this film. Sara (Minka Kelly) is a fashionable girl from Iowa, so it is logical for her to enroll in fashion classes in a Los Angeles college. She seems popular, has the right contacts, including a successful lesbian designer, and likes to party with her wild friend Tracy (Alyson Michalka).

Enter Rebecca (Leighton Meester), the new roommate. She hates Tracy at first sight for reasons beyond comprehension, is rude to Saraâ€™s boyfriend Stephen (Cam Gigandet), and is fascinated by Saraâ€™s personal belongings. A formula screenplay is set, and the rest is predictable.

The characterization is shoddy, to begin with. You WILL question Rebeccaâ€™s preoccupation with her roommate. Any attempt to show Sara as a wonderfully unique person falls flat on its face, especially the bit where she reveals her dead sisterâ€™s name tattooed on her chest.

Stephen squints and drawls his way into her life, but the lack of chemistry is electrifyingly obvious. Tracy is the only character whose lines have been thought through - she is a wild, loud girl, and Alyson Michalka plays the part perfectly.

Then there is Rebecca herself. Long after the movie is over, you may catch yourself wondering what on earth her problem was. Leighton Meester manages to look creepy, but she also looks bored to death, as she embarks on her new assignment - to distance the world from Sara.

The highlight of the movie is Professor Roberts, played by a bald Billy Zane. In his 10-minute role, Zane looks as confused with his role as he was with Phantom. Sara smiles coyly every time she attends the Professorâ€™s class, but is shocked when he makes a pass at her. Professor Roberts is introduced as some kind of a genius in his field, and his flirtation with Sara seems to stem from the fact that she is special. However, he has no qualms jumping on Rebecca.

It is difficult to slot this movie into any particular genre. Christian E Christiansen has no clue, either. The PG-13 certificate is unnecessary - there is no horror, nor is there any blood, gore, sex or abuse. The actors and the director sleepwalk through the movie. The writerâ€™s name does not appear in the credits, and rightfully so, since there is no story.

Do yourself a favour, and skip this movie. Unless you have a really hot date, which would then eliminate the necessity to look at the big screen.
Share. Save. Connect.
Tweet
THE ROOMMATE SNAPSHOT

ADVERTISEMENT
This page was tagged for
The Roommate english movie
The Roommate reviews
release date
Leighton Meester, Minka Kelly
theatres list
Follow @fullhyderabad
Follow fullhyd.com on
About Hyderabad
The Hyderabad Community
Improve fullhyd.com
More
Our Other Local Guides
Our other sites
© Copyright 1999-2009 LRR Technologies (Hyderabad), Pvt Ltd. All rights reserved. fullhyd, fullhyderabad, Welcome To The Neighbourhood are trademarks of LRR Technologies (Hyderabad) Pvt Ltd. The textual, graphic, audio and audiovisual material in this site is protected by copyright law. You may not copy, distribute, or use this material except as necessary for your personal, non-commercial use. Any trademarks are the properties of their respective owners. More on Hyderabad, India. Jobs in Hyderabad.