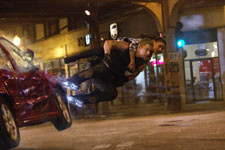 Kritika Deval / fullhyd.com
EDITOR RATING
5.5
Performances
Script
Music/Soundtrack
Visuals
5.5
6.5
6.5
7.0
Suggestions
Can watch again
No
Good for kids
No
Good for dates
No
Wait to rent it
Yes
When this writer was a child, she hated homework, notes, and just about any and all kinds of work. She'd sit in her class, dreading demands for the submission of assignments, and dream of being a superhero, whose super power was the ability to play with time. In Jupiter Ascending, when Kalique Abrasax (Tuppence Middleton), heir to the House of Abrasax, explains that once humanity goes beyond a planet or a solar system or even a galaxy, the only commodity worth fighting for would be time, it was that lazy child that took notice.

Kalique then goes on to explain to our protagonist Jupiter Jones (Mila Kunis) that she is tens of millennia old, and that she and the rest of the universe got their prolonged lives by seeding planets like the Earth and then harvesting them for "genetic material". All of this is accompanied by Mila Kunis looking extremely convinced that she is actually acting when she really is not.

"And the point is?" you might ask - and rightly so. The point, we'll tell you, is that Jupiter Ascending combines wish fulfilment with so much sub-par camp and cheese that it feels like one of those times when you know that Domino's Pizza is worse than most other pizzas, but only its cheesy weird-tasting mess will do.

Take, for instance, this other scene where Jupiter Jones confesses her growing feelings for/to Caine Wise (Channing Tatum), a fighter who's been sent to Earth to capture Jupiter but ends up becoming her perpetual savior, and he replies with the following line - "I'm a Splice. I have more in common with one of your dogs than with you." Jupiter's inimitable response - "I love dogs! I really do!" That's funny because she realizes later that what she said was super-weird. For more context, Caine Wise is a warrior who was bred by crossing a human with a wolf. And he looks adorably dog-like, making you want to play fetch and scratch him behind the ear. Also, dog + person = Caine(-ine) Wise - this movie goes deep, brah!

Before these ramblings become as incoherent as the film we just saw, let's get done with the plot, such as it is one.

Jupiter Jones is a Russian immigrant in the USA who makes a living cleaning rich people's toilets. One arguably fine day, her cousin convinces her to sell her eggs for a lot of money. However, the fertility clinic is attacked by non-human aliens, and this is where Caine first swoops in to save her, setting the tone for the rest of the film. Also, this scene harbingers the importance of Jupiter's genetic material. As it turns out, this woman on this tiny corner of the universe has the exact same genetic code as a millennia-old interstellar matriarch who just happens to "own" Earth. Woah, not only is this film deep, it also has layers. Like an onion. Layers under layers.

When this old lady, the head of the aforementioned House of Abrasax, dies, her three children including Kalique, Titus (Douglas Booth) and Balem (Eddie Redmayne), already embroiled in a dynastic battle among themselves, now have a fourth contender to try and get rid of. And so Jupiter goes from one steampunk corner of the universe to another, making a series of what in this context are literally the worst decisions ever, all of which Caine swoops in to save her from the consequences of.

Jupiter Ascending is awkwardly constructed, embarrassingly obvious, and openly derivative of all contemporary popular sci-fi. It is also the sort of ambitious narrative our own imaginations would conjure up, and a bizarrely correct extension of how the Wachowskis, in their own unique way, have grappled with the questions of purpose and identity.

Mila Kunis and Channing Tatum bear an uncanny resemblance to cardboard cutouts of themselves, with Tatum faring a bit better because he's just so happy skating through space and kicking ass across space and time. The rest of the cast are hilariously caricaturish, with Redmayne and Middleton drawing laughs when they intend them and when they don't.

The visual effects are as wildly inconsistent as the rest of the film, with the effect that you'll feel you're watching two different movies - one made for TV in the '70s, and another budgeted by the biggest producers of today. The music is... there, we guess? You really aren't left with the resources to pay attention.

Jupiter Ascending is not a "good" movie by most standards. However, if your standards involve decent space operas of the kind that are in short supply of late, you can do much worse.
Share. Save. Connect.
Tweet
JUPITER ASCENDING (3D) SNAPSHOT 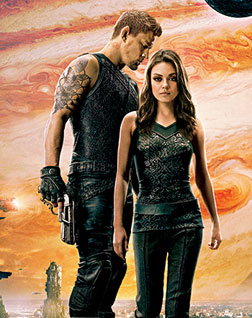 ADVERTISEMENT
This page was tagged for
Jupiter Ascending (3D) english movie
Jupiter Ascending (3D) reviews
release date
Mila Kunis, Channing Tatum
theatres list
Follow @fullhyderabad
Follow fullhyd.com on
About Hyderabad
The Hyderabad Community
Improve fullhyd.com
More
Our Other Local Guides
Our other sites
© Copyright 1999-2009 LRR Technologies (Hyderabad), Pvt Ltd. All rights reserved. fullhyd, fullhyderabad, Welcome To The Neighbourhood are trademarks of LRR Technologies (Hyderabad) Pvt Ltd. The textual, graphic, audio and audiovisual material in this site is protected by copyright law. You may not copy, distribute, or use this material except as necessary for your personal, non-commercial use. Any trademarks are the properties of their respective owners. More on Hyderabad, India. Jobs in Hyderabad.