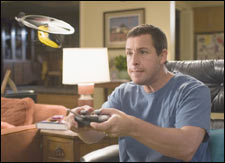 Samrat Sharma / fullhyd.com
EDITOR RATING
5.0
Performances
Script
Music/Soundtrack
Visuals
NA
NA
NA
NA
Suggestions
Can watch again
NA
Good for kids
NA
Good for dates
NA
Wait to rent it
NA
I have to admit I have had the guilty pleasure of enjoying some Adam Sandler comedies in the past. He is a bona fide Saturday Night Live star, and his presence induces a certain disarming charm to the proceedings, which helps with the inane gags and spoofs a lot. Unlike other comedies, his films do not solely rely on sex and/or bodily wastes to generate humor either. While no Munnabhai, they have been time-pass material till now.

Till now. Click is one of those comedies where for every gag that works, there is one that falls flat on its face. Long time Sandler collaborator Frank Coraci (Waterboy, Wedding Singer) returns with this supposed gag-a-thon with confidence and a new found slick editing, but forgets to instill the boyish charm or zany laughter force in the storytelling. There are still some moments that work, and you are guaranteed to at least smile, but they are dotted with potty humor and unfunny animal sex jokes.

Sandler plays Michael Newman, a workaholic architect who works too hard in order to secure a partnership promotion in his firm. His boss (an in-form David Hasselhoff) is a vicious, smooth-talking two-timer, and a constant source of grief, not to mention never-ending grief. His hard work ends up in neglect of his wife (Kate Beckinsale, looking so stunning, it is hard to believe anyone would ever neglect her), and two cute kids.

One night, in a fit of frustration after trying to get the remote control to work, Michael heads off to a department store, where he wanders into a strange stock room, and finds Morty (Christopher Walken) who presents him with a universal remote that not only controls his TV but his life. It allows him to travel back and forth and even freeze-frame his life, mute an argument, pause his boss to slap him etc.

Hilarity ensues? Well, for a while. The talented cast, and an evermore confident Sandler keep the proceedings funny and zany for as long as they can. Sandler especially holds fort for a long time after the film has started losing steam. But there are only so many times a dog doing the nasty with a stuffed toys can seem funny to us. It is thankful, then, that film takes a surprising turn into a serious drama during the last half hour or so, which gives Sandler some room to expand his histrionics, and the film to bounce back on the entertainment scale.

David Hasselhoff finds his funny bone, and plays his character with glee and aplomb. Hats off to his unlikeable character and lovable performance. Walken almost steals the film as Morty, the mysterious man from “Way Beyond”. His quirky roles have become obligatory for him, so kudos to him for keeping this role fresh and inventive. Kate Beckinsale doesn't have much to do other than look hot, and might I add she does an exemplary job of that.

But the star of an Adam Sandler film is Adam Sandler, and he does a damn convincing job. His portrayal of a hard working guy who blows his top, and then discovers a gadget that lends him immense power is not something new to him, and he delivers as expected – nothing more nothing less. It is his serious turn near the end of the film that is the surprise package of the film. While it does oscillate between emotional and maudlin, this is a surprising turn of events for a Sandler film, and you can't help but feel thankful for the end of the downward spiraling humor by that time.

In the end this is a film that delivers it gags straight up, spirals down to distasteful territory, then redeems itself somewhat by adding an emotional angle to the story. Most criminal, however, is the fact that the film underestimates the power of the remote as a plot device and restricts itself to telling jokes that the screenwriters could think of. I spent more time thinking what I could do with such a device than laughing at what it was being put to use for.
Share. Save. Connect.
Tweet
CLICK (ENGLISH) SNAPSHOT

ADVERTISEMENT
This page was tagged for
Click (English) english movie
Click (English) reviews
release date
Adam Sandler, Kate Beckinsale
theatres list
Follow @fullhyderabad
Follow fullhyd.com on
About Hyderabad
The Hyderabad Community
Improve fullhyd.com
More
Our Other Local Guides
Our other sites
© Copyright 1999-2009 LRR Technologies (Hyderabad), Pvt Ltd. All rights reserved. fullhyd, fullhyderabad, Welcome To The Neighbourhood are trademarks of LRR Technologies (Hyderabad) Pvt Ltd. The textual, graphic, audio and audiovisual material in this site is protected by copyright law. You may not copy, distribute, or use this material except as necessary for your personal, non-commercial use. Any trademarks are the properties of their respective owners. More on Hyderabad, India. Jobs in Hyderabad.