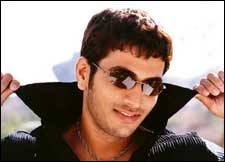 EDITOR RATING
3.0
Performances
Script
Music/Soundtrack
Visuals
NA
NA
NA
NA
Suggestions
Can watch again
NA
Good for kids
NA
Good for dates
NA
Wait for OTT
NA
Hi. I'm Kranti. I'm the hero of this movie. I know because my dad told me. Between the two of us, that about covers our knowledge of this world. My dad is the producer of this film. But don't you go thinking that that's why he cast a super-doodus like me in this flick. Given his taste in filmmaking, I've have cleared his standards for hero anyway.

Anyway, I am a good-for-nothing scumbag (in the movie, I mean) with a character sketch that will make half the youth who watch this decide that eve-teasing is a freely downloadable add-on to masculinity. My dad's social consciousness ran out the moment he'd finished counting the first five rupees he landed in his life.

Jahnavi (Aditi Agarwal) is a challenge to me since she does not want to be friends with me, since she complains when I cheat in exams, since she resists my attempts to slander people, and since she will not let me squeeze her breasts. So I implicate her in a copying scandal and get her debarred.

Unable to digest it, she decides to kill herself, but the poison she uses is not in the official list cleared for effective use on humans by the Indian Medical Association, and so she fails. In case you are still thinking about the breasts bit, honest, watch the movie.

I am now ashamed at my act. Now you might ask how one can figure this out, since I show exactly three expressions in the movie, all of which look exactly the same. It's easy, really. I say it out. Every time I have to convey something, I say it out. Gets this whole hoopla about acting out of the way. The solutions to most "complex" problems are ultimately so simple. It needed a 20-something to figure this out. Sheesh.

Anyway, I move permanently out of AP now. Not because that was the last wish of the people who died watching the first half, but because Jahnavi has moved to Mumbai, and I am in love with her. You know because, yes, I say so. In Mumbai, I get immediate admission into the engineering college she is in - okay, so I might need help to crack a one-letter jumble, but my dad owns the script. What you lookin' at, doofus?

Here is when we add some "mass elements" to the movie. If you've watched a film program on Gemini or Teja for, oh, 30 seconds, you'd have heard a director use that word. 30 seconds is also an important figure in the making of this film, because that is the amount of time we spent on making this film realistic. This part of the movie sees me single-handedly demolish the empire of Salim (Rahul Dev), an underworld don who terrorizes the whole of Mumbai, including our college, with his efforts to act like Raghuvaran in Shiva. He even mouths the same dialogues.

Anyway, one of the three of us - Salim, Jahnavi and me - is finally finished off, and the remaining two unite. Revealing more than this would be to spoil the suspense.

Vidyarthi was made to depict the metamorphosing primary aspirations of the continually evolving post-modern student generation of today - i. e. having sex. We show college girls in bustier, college girls in spaghetti, college girls in mini-shorts, college girls with their bosoms flattened against the camera lens, and everything else college girls were created for. We set new records in how long you can tread the line between vulgar and outrageously vulgar in dialogues and lyrics, without actually getting there.

On the plus side, we show that there is hope for almost everyone to be a movie hero. Or a scriptwriter. Or a CBFC official.
Share. Save. Connect.
Tweet
VIDYARTHI SNAPSHOT

ADVERTISEMENT
This page was tagged for
vidyarthi telugu mp3rington
vidyardhi 2004 full movie download
Vidyarthi Telugu movie 2004
vidyarthi movie telugu songs
vidyarthi 2004
Follow @fullhyderabad
Follow fullhyd.com on
About Hyderabad
The Hyderabad Community
Improve fullhyd.com
More
Our Other Local Guides
Our other sites
© Copyright 1999-2009 LRR Technologies (Hyderabad), Pvt Ltd. All rights reserved. fullhyd, fullhyderabad, Welcome To The Neighbourhood are trademarks of LRR Technologies (Hyderabad) Pvt Ltd. The textual, graphic, audio and audiovisual material in this site is protected by copyright law. You may not copy, distribute, or use this material except as necessary for your personal, non-commercial use. Any trademarks are the properties of their respective owners. More on Hyderabad, India. Jobs in Hyderabad.