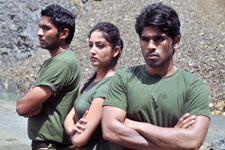 Ravi Kandala / fullhyd.com
EDITOR RATING
3.0
Performances
Script
Music/Soundtrack
Visuals
3.0
3.0
3.0
4.0
Suggestions
Can watch again
No
Good for kids
No
Good for dates
No
Wait to rent it
No
There is a vast difference between the sensibilities of movie-goers in Tamil Nadu and Andhra Pradesh. The sooner director Radha Mohan realises this, the better it is for him and for us here. A star kin can debut with a completely deglamorised movie in Tamil, but in Telugu, a star launch has to be an extravagant affair with loads of masala.

This is exactly where Allu Sirish's debut vehicle, Gauravam, falters big time. The two mistakes the director makes - using a novice actor to try and tackle a serious topic, and using a serious topic to try and launch a star son - come back to haunt him and us all through the movie.

Gauravam, then, tracks the story of Arjun (interesting to see how Sirish takes his brother's name for his screen name), a rich kid lacking nothing. He heads to a village, SM Palli, to meet his friend Shankar.

He finds out that Shankar had eloped with an upper-caste girl from in his village a few months ago, post which no one has heard from him or the girl. The rest of the film is about the horrific truths he uncovers, and how he discovers himself in the process. He is helped in the process by Yamini (Yami Gautam), a young lawyer fighting for the rights of the downtrodden in the village.

Director Radha Mohan takes a contemporary topic, one with serious social relevance, but fails to weave an engaging yarn. The super-slow narration and the pointless subplots bore the viewers no end. The plot has so many clues about the ending strewn all over that the hero seems like an idiot for not figuring out things earlier. A couple of songs that pop up at entirely inappropriate places also spoil matters.

Sirish, the latest entrant from the "mega" family, is still extremely raw. And not just raw around the edges like they say - this one is raw through and through. He is stiff and uncomfortable, and has one expression throughout. Long way away from stardom.

Yami Gautam has a limited role, and is severely hampered by a badly written character that never goes beyond being the hero's assistant. L B Sriram and Prakash Raj do well in their parts, and carry a lot of the movie on their shoulders.

The film is entirely set in a village, with a limited portion shot in Allu Arjun's swanky pad. The technical departments all do a good job. S S Thaman scores two songs with Tamil overtones, that hardly appeal.

Gauravam is a film that never takes off, and offers neither entertainment nor a message. Choose the other release of the weekend for some good fun.
Share. Save. Connect.
Tweet
GOURAVAM SNAPSHOT 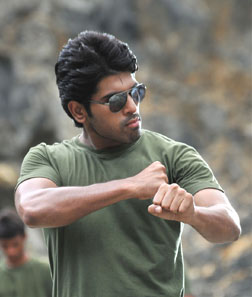 ADVERTISEMENT
This page was tagged for
Gouravam telugu movie
Gouravam reviews
release date
Allu Sirish, Yami Gautam
theatres list
Follow @fullhyderabad
Follow fullhyd.com on
About Hyderabad
The Hyderabad Community
Improve fullhyd.com
More
Our Other Local Guides
Our other sites
© Copyright 1999-2009 LRR Technologies (Hyderabad), Pvt Ltd. All rights reserved. fullhyd, fullhyderabad, Welcome To The Neighbourhood are trademarks of LRR Technologies (Hyderabad) Pvt Ltd. The textual, graphic, audio and audiovisual material in this site is protected by copyright law. You may not copy, distribute, or use this material except as necessary for your personal, non-commercial use. Any trademarks are the properties of their respective owners. More on Hyderabad, India. Jobs in Hyderabad.