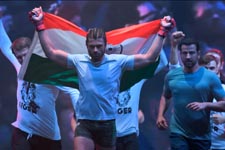 Sai Tulasi Neppali / fullhyd.com
EDITOR RATING
5.0
Performances
Script
Music/Soundtrack
Visuals
6.5
4.0
7.5
7.5
Suggestions
Can watch again
No
Good for kids
No
Good for dates
Yes
Wait for OTT
Yes
Filmmaker Puri Jagannadh sees Liger as his Second Coming. After decades of churning out crowdpleasers like Pokiri and Desamuduru, and releasing a movie every six months, he now wants to craft bigger and bolder spectacles on longer timescales - perhaps to match his peer Rajamouli's scale and vision. By his side is the charismatic, scrappy outsider, actor Vijay Devarakonda - the Liger - who is already set to act in Puri's next movie, JGM. They call themselves the "do-epic-shit" partners. Liger was supposed to be a roaring debut of this combo - instead, it is a disappointing squawk. A movie that makes a lot of sound, but not a lot of sense.

A young man known only as Liger (Vijay) arrives in Mumbai along with his mother Bala (Ramya Krishnan). They share a dream - that Liger will be the next National Champion of Mixed Martial Arts (MMA). But as chaiwallas from Karimnagar, they don't have a penny to pay for training. Liger also has a prominent stutter. It's a big source of distress for him and fodder for his bullies. But a coach (Ronit Roy) sees the hunger in Liger's eyes and witnesses his killer talents - after all Liger is the son of his old MMA rival, Balaram - and he agrees to train him for free.

Into Liger's severe life enters Tanya (Ananya Pandey), a glib, over-the-top, rich Insta influencer, who is every bit his opposite. In the movie's opening scene, Liger is late for a big fight because he tries to rescue her from kidnappers in a foreign country. Liger's stutter-free voiceover says, "I hate her". Then the scene cuts off, and Liger begins to narrate the backstory of how his and Tanya's lives get tangled up in unexpected ways.

Liger, by Puri's own admission, is a "fully-loaded commercial movie". Which, in this era of Telugu cinema, is a euphemistic way of saying it will come jammed with superfluous songs and fights to make up for a weak script and contrived characters. So Liger too has five dance numbers, which may be five too many, but at least they provide a brief respite from the hare-brained plot.

The story tries to convey the idea that pain is a great motivator. But rather than placing real obstacles in Liger's path, Puri lays down flimsy speedbumps. There is a little pissing contest between Liger and a rival MMA training academy run by a fighter called Sanju (Vishu Reddy), who is also Tanya's brother. There are plenty of low-stakes skirmishes. There is only one real moment of anxiety when Liger's team searches for donors to sponsor his UFC bid. But even this issue is resolved in all of two minutes. In the blink of an eye, Liger's bullies become his friends, his arch enemies become ardent supporters.

Most of the movie's characters are, plainly speaking, unlikeable. Their assigned qualities are so exaggerated as to make them simplistic caricatures. Liger's mother is a fierce woman. But her tough love is dialed all the way to max, all the time. She harangues her son about staying focused, whacks him, and even kicks him if he wavers. To bring out his best, she gives him twisted motivations and plays silly mind games. So when for the tenth time she growls "Oreyyy Ligerr" and glares at her son with Kali-eyes, the audience dismisses her as a broken tape recorder.

Puri has never had a great track record in writing roles for women, but Tanya will likely be remembered as his most irritating yet. His interpretation of the social media-obsessed Gen-Z girls as vacuous, midriff-baring alcoholics who'll sell their left kidney for a few Insta likes is frankly embarrassing. Tanya is screechy and just plain dumb. When she calls a kiss "a pappi", and has long one-sided conversations with Liger, you find yourself wishing for a scrollbar to skip past her scenes.

Fans of MMA, or those who come chasing the promise of a good fight, will leave utterly disappointed. While there are plenty of montages showing Liger in the ring, bashing up a slew of opponents, there isn't a single truly satisfying showdown. In place of an epic fight, is a self-indulgent tangent involving boxing legend Mike Tyson.

The Telugu dubbing for the Bollywood actors in the movie is such an all-around fiasco that some of the most memorable moments are the ones without dialog. In one scene, Liger mimes the act of smashing his rival and cutting him up into pieces. The sound engineering is so on-point that this mute act is hilarious. Other times, too, the background score saves the dramatic energy that the dialogues kill. Actors randomly switch between Hindi and Telugu to mouth their lines. Chunkey Pandey who plays a pivotal role in the second half of the movie has some of the worst dubbing you've ever heard.

Ramya Krishnan brings her best Sivagami style to her Balamani role. But we've seen her do this character of the stern mother over and over again, and it's become tiresome. Ananya Pandey as Tanya gives to her role only as much as it demands, which isn't a lot. Her expressions are by design hammy and clownish. As if her cue cards were full of emojis. Comedian Ali has a small, unfunny role as a (surprise, surprise) drunk.

Vijay Devarakonda's turn to heroism and action-oriented roles was only a matter of time. With Liger, he shows you that he is capable of undergoing arduous transformations for his craft. His chiseled body, of which you see plenty, makes the fight scenes very satisfying to watch. His stutter feels just a tad bit overdone, but it is bearable enough. But his charisma, his ability to emote rowdyism, and his taunting, defiant looks are the biggest strengths he brings to Liger.

No doubt the Liger team held it together during the challenging pandemic times, battling budget-bloat and delays to finally get the movie out. If good intentions and hard work were enough to make a successful movie, Liger would be an ace. But there is that pesky little issue of having a good story and script. Hopefully, Puri and Devarakonda take note before losing the next two years in their upcoming movie, JGM. 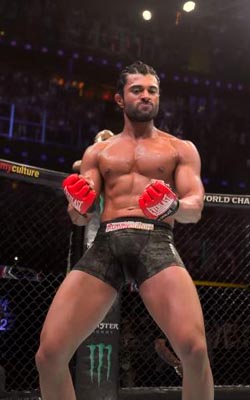 ADVERTISEMENT
This page was tagged for
Liger telugu movie
Liger reviews
release date
Vijay Devarakonda, Ananya Pandey
theatres list
Follow @fullhyderabad
Follow fullhyd.com on
About Hyderabad
The Hyderabad Community
Improve fullhyd.com
More
Our Other Local Guides
Our other sites
© Copyright 1999-2009 LRR Technologies (Hyderabad), Pvt Ltd. All rights reserved. fullhyd, fullhyderabad, Welcome To The Neighbourhood are trademarks of LRR Technologies (Hyderabad) Pvt Ltd. The textual, graphic, audio and audiovisual material in this site is protected by copyright law. You may not copy, distribute, or use this material except as necessary for your personal, non-commercial use. Any trademarks are the properties of their respective owners. More on Hyderabad, India. Jobs in Hyderabad.