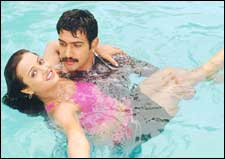 Mithun Verma / fullhyd.com
EDITOR RATING
1.0
Performances
Script
Music/Soundtrack
Visuals
NA
NA
NA
NA
Suggestions
Can watch again
NA
Good for kids
NA
Good for dates
NA
Wait for OTT
NA
Shiva (Tarakratna) lives in a world of dreams. His dreams include showering with Aishwarya Rai. However, we're not quite sure if Aishwarya will be thrilled. Because Shiva includes in his dreams superimposed images of NTR and Balayya jerking their hips.

Shiva's other dreams are also equally fascinating. Landing a hot chick is on top of that list. With the charm of a broken wash-basin, the only hot chick he can land is a piece of chicken on his plate. That, too, because it's dead. His two philosophically retarded buddies blast him for being such a lady repellent. They implore him to reconsider his attitude towards love.

They of course meant that he change his attitude of ignoring people's love for cinema, and quit acting. Shiva doesn't take the hint. Instead, he falls in love with this girl. Fate has it that these two only keep rubbing against each other in dream sequences. Nightmare sequences to be exact. In reality, they never actually meet. Sure, he falls in love and stuff, but he always keeps missing her barely.

Now, the villain (Ashish Vidyarthi), after seeing the heroine for barely a few minutes, thinks he should marry her. By the way, this dude is totally out of his marbles. This causes her to run hard and bump into Shiva. Shiva rescues her from the baddies only to realise that she's disappeared again. Smart girl, this.

Shiva is dejected. All those stunts, all those expressions, all those heavy dialogues... for what? FOR WHAT?! To see the heroine run away? What sorta stupid script is this? The only real chance he gets to hold her in his arms without stupid foreigners throwing stones at him, and she runs away! Damn the director!

Shiva's dejection is only short-lived. Shiva's putting on his dejection act cannot be borne by any grown-up human, leave alone someone like the director. So, soon, Shiva and his girl kiss and make up. And the villain is arrested by a CBI officer who was posing as a madman.

Pappu is the script writer, lyricist, music director, dialogue writer and the director of this movie. With so many jobs to handle, one can only forgive him for not having an attention span of more than a second in all these areas. But we really need to look seriously into this multi-talented, dynamic director. We not only need to look into him seriously, but also need to put a few bullets in him to make him that much stronger.

But Tarakratna has managed to show potential once again. He's a definite future prospect all right. He seems right on track to join the select few enjoying the super success of being electrically cremated at the Amberpet Crematorium. If he stars in movies like these, it's only ashes to ashes and dust and dust for him.

So, can any of the hardcore, masochistic sickos stomach this puke-gravy? No.
Share. Save. Connect.
Tweet
NO SNAPSHOT

ADVERTISEMENT
This page was tagged for
No telugu movie
No reviews
release date
Nandamuri Taraka Ratna, Chaya Singh
theatres list
Follow @fullhyderabad
Follow fullhyd.com on
About Hyderabad
The Hyderabad Community
Improve fullhyd.com
More
Our Other Local Guides
Our other sites
© Copyright 1999-2009 LRR Technologies (Hyderabad), Pvt Ltd. All rights reserved. fullhyd, fullhyderabad, Welcome To The Neighbourhood are trademarks of LRR Technologies (Hyderabad) Pvt Ltd. The textual, graphic, audio and audiovisual material in this site is protected by copyright law. You may not copy, distribute, or use this material except as necessary for your personal, non-commercial use. Any trademarks are the properties of their respective owners. More on Hyderabad, India. Jobs in Hyderabad.