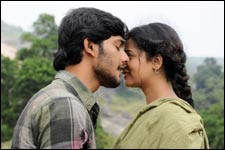 Deepa Garimella / fullhyd.com
EDITOR RATING
3.0
Performances
Script
Music/Soundtrack
Visuals
6.5
3.0
7.0
4.5
Suggestions
Can watch again
No
Good for kids
No
Good for dates
No
Wait for OTT
No
In Neeku Naaku Dash Dash, the lead couple, on the run to escape powerful goons, hitch-hikes a ride in a truck. The driver, played by Tanikella Bharani, is someone who is in charge of "creating" accidents so that his boss can claim the insurance on his vehicles. The driver is completely casual, and indifferent to the blood-stained couple's pain and desperation, busy as he is in not steering the lorry, and in trying to wreck the damn thing.

Given Tanikella's genius, the scene is indeed as funny as it was meant to be. But when he's saying things to the effect of "There's no stopping this truck, even by me; it's meant to crash", you cannot help but wonder if he's referring to himself in the context of the movie.

Yes, NNDD has to be one of the most painful products to have emerged from the industry in recent times. Gone are the days when Teja movies had (pseudo-?) innocent love and R P Patnaik's (whose Friendsbook, incidentally, happens to release today as well) immensely hummable numbers. This is like Ver 2.0 of Ram Gopal Verma's already exasperating Version 3.0.

The story is set in a sweat shop that deals in spurious liquor. The boys and girls working there are trapped into the place, and are constantly physically and verbally abused by the hooligans who run the place. Siva (Prince) and Gayathri (Nanditha) fall in love with each other - this, in a place where anyone even eyeing someone of the opposite sex is thrashed relentlessly.

Anyway, another problem crops up, and the 2 must definitely run for their lives. They are pursued by the liquor mafia bosses as well as the police, while Siva has his own baggage to deal with.

The film lacks a purpose. Is it a love story? Is it a political thriller? The movie tries to be all gritty and hard-hitting, but it actually ends up greasy. The romance is overshadowed by the abusive nature of every character in the film.

And for all the hype about NNDD dealing with the liquor syndicate, there's nothing to root for in this movie - the good guys keep losing, and the bad guys keep winning.

Instead of depth and intensity, you have 2-dimensional ruffians, lots of blood, and some swearing that is camouflaged by Dash-Dashes and beeps.

In the end, there's so much hyperactive chasing, as Teja tries to make this as thrilling as possible, which is tiresome and ruined by some lousy emotional scenes between Siva and Gayathri. The movie is so long it runs to 2 hours past its date of expiry.

The heroine's character is both jarring and appalling, and we aren't talking about how she overdoes the Dash Dash bit. Gayathri aggressively pursues Siva, even putting him in trouble. Then, they meet one night and make out, and she gets pregnant. For the rest of the film, Gayathri is whining and demanding, while Siva himself is upto his ears in problems of his own. Nothing like a whiff of pure and innocent adolescent romance to reinforce your faith in love, eh?

Teja is not a bad director of actors. Prince is watchable as the mild-mannered Siva, and the adolescent look helps the subject. Suman Shetty is literally the saviour of the film whenever he is around.

The person playing Bapineedu (the boss of the sweat shop) is good, as is actor Venu, who plays his sidekick. Teertha plays the gangster's moll, and is suitably sleazy. The actors on the side are all decent, even if they're "42 new faces".

Gayathri seems to be the anti-thesis of the Telugu heroine, in terms of looks. In keeping with the film's subject and theme, she is unkempt (even more so towards the end), her hair is all over the place, and her bloody nose stays bloody till the end. Not a pretty sight at all, but debutante Nandita shows exuberance and spirit in her role throughout.

Save for an annoying wailing song in the end, NNDD has good tunes that are unconventionally composed. The choreography is good, too. However, the movie (reportedly shot with a Red Epic camera) has the look of a home video in several places.
Share. Save. Connect.
Tweet
NEEKU NAAKU DASH DASH SNAPSHOT 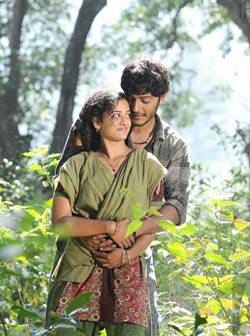 See Neeku Naaku Dash Dash full details
NEEKU NAAKU DASH DASH USER REVIEWS
1 - 2 OF 2 COMMENTS
POSITIVE  |  NEGATIVE |  NEWEST  |  OLDEST  |  MOST HELPFUL  |  LEAST HELPFUL
USER RATING
6.3
4 USERS
Performances
Script
Music/Soundtrack
Visuals
4.0
4.5
4.5
5.0
Can watch again - No
Good for kids - No
Good for dates - No
Wait for OTT - No
Hari on 13th Apr 2012, 8:14pm | Permalink
Teja wants to repeat the success of Chitram and Jayam but does not seem to know what made them click. He keeps trying new actors and supposedly "bold" themes. He needs to get his head right. He needs to have script first. Teja, please do us a favor. Go back to cinematography.

i did not see this movie . .
but yours ratings ar not soo nice i cn say . .
you low rating for 'ee rojuloo ' movie is not ssoo impressive . .