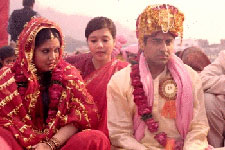 Zehra Abbas / fullhyd.com
EDITOR RATING
7.5
Performances
Script
Music/Soundtrack
Visuals
8.0
8.0
6.5
7.0
Suggestions
Can watch again
Yes
Good for kids
Yes
Good for dates
Yes
Wait for OTT
No
In Greek mythology, Atlas was the titan who was condemned by Zeus to hold up the celestial spheres for all eternity. Prem Prakash Tewari considers himself the Atlas of Haridwar, when he is forced by his family to marry a plus-size girl. Dum Laga Ke Haisha is the story of Prem's evolution into a man worthy of every kilo on his wife.

Sharat Katariya, in his first outing as a director, takes you through an unlikely and heart-warming love story set in 1995. Prem (Ayushmann Khurrana) is the quintessential loser, who failed to clear his class 10 exams, and lives in terror of his chappal-wielding dad. He attempts to muffle reality by holing himself up in his father's cassette shop, Prem Audio Video Centre. With headphones firmly on, he whiles away time listening to Kumar Sanu songs.

Prem is forced to face reality when his family forces him onto the mandap at a mass wedding and gets him married to Sandhya Verma (Bhumi Pednekar). He looks on in dismay as his overweight missus dances with gay abandon after the ceremony. Sandhya is educated and has two goals in life - being happily married, and becoming a "masterni" (teacher). Little does she know that the former would be tougher than the latter.

Prem goes through with the wedding, but is unable to accept what he perceives as his wife's unattractiveness, and a deep resentment takes hold of him. Initially, it's expressed in his hilarious determination to not consummate the marriage (his wife turns out to be more determined than him), and later, in a violent and unkind rejection of her.

The couple head for divorce, but the Indian legal system inadvertently plays Cupid. The court orders the estranged couple to return with a final decision after spending 6 months together. Predictably enough, the couple reconcile, but unpredictably enough, through a wife-carrying competition.

One of the biggest strengths of Dum Laga Ke Haisha is the cast. Ayushmann Khurranna, after the disastrous Hawaizaada, is in form again. Kudos to the actor for fearlessly and ably portraying an unsympathetic failure, warts and all. His character undergoes tremendous growth, and credit to Khurranna for making the journey believable. He spouts dialect-riven Hindi, and teams it with the appropriate mannerisms and body language.

Debutant Bhumi Pednekar is brilliant as Sandhya, the heroine who propels the narrative forward. She has a mobile, expressive and pretty face, and wins the audiences over in minutes. You wonder why her husband can't see her beauty. Sandhya loves Prem with the endearing simplicity of a girl brought up on dreams of happily-ever-after arranged marriages. As she faces one unkind rebuff after another, the character shows another side to her, and thank God for that. Beneath all those layers of fat, is a spine of steel. Whether it is resolutely seducing her reluctant husband, or standing up to his unkindness, she goes through a gamut of emotions, and depicts them beautifully.

The supporting cast deserves mention for ably supporting the lead actors and adding to the earthy humour. Sanjay Mishra, as Prem's father, proves once again that he is a grossly under appreciated actor. Alka Amin does a wonderful turn as Prem's doting and often hysterical mother who worries about everything from his future to the consummation of his marriage. Kumar Sanu makes the guest appearance to beat all guest appearances. He doesn't speak - he hums a ditty. Wah wah Sanu sahib! However, his presence is a constant thanks to his famous songs, which play throughout the film. Another character that stays cheerfully in the background throughout the movie is the river Ganga. As the characters endure upheaval and change, the Ganga flows placidly in the back, an amused spectator to the vagaries of human life.

Sharat Katariya deserves praise for his work both as director and writer. He adds depth to the film with his realistic and compassionate portrayal of human nature and love. The viewer might not sympathise with Prem's embarrassment at driving his heavy wife over the occasional speed breaker or while introducing her to his friends. But the skillful writing ensures that you recognize the self-loathing at the root of Prem's behavior. You sit up in surprise when Sandhya shows a fiery self-respect, and you want to cheer when she goes nighty shopping!

Subtle symbolism adds another layer to the narrative. The messy cassette stack in Prem's room is a visible yet restrained image of the state of his life. When Sandhya sets it in order, you smile knowingly at the foreshadowing.

For viewers who grew up in the nineties, Dum Laga Ke Haisha is a nostalgic treat for the senses. The production design is spot on. The camera trots down narrow, dilapidated lanes with peeling posters on the walls and open drainages. Beat up Bajaj scooters move up and down these streets. You'll smile at Prem and his father's wide-eyed wonder at their first CD, and at Prem as he patiently twists an unspooled cassette with a pen.

There are other treats. Rusty tin pencil boxes, those awful double-breasted blazers with large gold buttons (made famous by another Prem in HAHK), and that evergreen remedy for indigestion - lime and lemony Limca! The setting contributes immensely to the atmosphere of the movie, and Haridwar can expect increased footfalls thanks to this film. It captures the city's old world charm and uniquely Indian atmosphere perfectly.

Watch the film also for its fresh spin on romance. One example of a clever touch is a twist on the '90s trend of the antakshari. Prem's and Sandhya's first marital tiff is more of a musical spat, as they play famous '90s songs one after the other, using the over-dramatized lyrics to communicate their annoyance.

The music does its bit to bolster the romance, and the track that stands out is Moh Moh Ke Dhaange. The movie's climax is a metaphor for romance in itself. As the wife-carrying competition begins, Prem initially struggles with Sandhya's weight. He then finds his stride and successfully navigates his way across the obstacles on the course, with the help of his wife's advice. When he discovers that Sandhya still loves him, it spurs him on to win the race. The wife-carrying competition is an allegory for marriage, in general.

It's deliciously ironic that Dum Laga Ke Haisha is produced by the Chopras, who wrote the book on formulaic, Bollywood romance. In today's India, with airbrushed photos and teen depression due to skewed body images, this film sends out a brave message by casting a beautiful, appealing, plus-size heroine. Sandhya is vibrant and happy, comfortable with her sexuality, and speaks her mind. The audience is reminded of the lyrics from one of the songs - "ordinary nahin, deluxe dhoondenge". Full marks to the makers for correcting our vocabulary and proving that "fat" is actually "deluxe".
Share. Save. Connect.
Tweet
DUM LAGA KE HAISHA SNAPSHOT 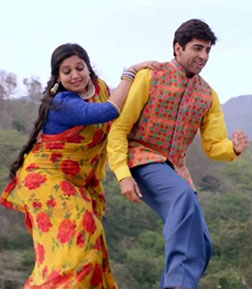 ADVERTISEMENT
This page was tagged for
dum laga ke haisha movie in mp4golkes
dum laga ke haisha hindi movie
dum laga ke haisha full hindi movie
dum lagake haisa full movie
dum laga ke haisa 1 gb
Follow @fullhyderabad
Follow fullhyd.com on
About Hyderabad
The Hyderabad Community
Improve fullhyd.com
More
Our Other Local Guides
Our other sites
© Copyright 1999-2009 LRR Technologies (Hyderabad), Pvt Ltd. All rights reserved. fullhyd, fullhyderabad, Welcome To The Neighbourhood are trademarks of LRR Technologies (Hyderabad) Pvt Ltd. The textual, graphic, audio and audiovisual material in this site is protected by copyright law. You may not copy, distribute, or use this material except as necessary for your personal, non-commercial use. Any trademarks are the properties of their respective owners. More on Hyderabad, India. Jobs in Hyderabad.