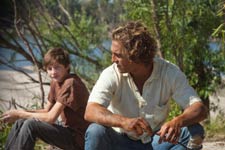 Nupur Barua / fullhyd.com
EDITOR RATING
7.0
Performances
Script
Music/Soundtrack
Visuals
7.0
7.0
6.0
7.0
Suggestions
Can watch again
Yes
Good for kids
Yes
Good for dates
Yes
Wait for OTT
No
The Mississippi River plays an important role in the history and culture of the United States of America. It is perhaps best remembered from the works of Mark Twain, the American author and humourist, who is also considered the father or American literature. And his influence on director Jeff Nichols is apparent in Mud, a movie whose title may not entice you into shelling out cash for tickets. That may be a mistake, because this movie is one of the best representations of non-urban American life in recent times.

Ellis (Tye Sheridan) and Neckbone (Jacob Lofland) are both 14, and best friends. Ellis lives with his constantly warring parents, and Neckbone with his oyster-catcher uncle Galen (Michael Shannon). The boys hear, from Galen, of a boat that is stranded on an island on the Mississippi, not too far from their homes. And so they set out one morning to see for themselves what this fancy boat is all about, and to also stake their claim on it.

They discover the boat atop a tree, and realise that somebody has already made it his, or her home. And this somebody is an intriguing man in a white shirt (which he claims is his lucky charm), named Mud (Matthew McConaughey).

The boys' lives, are intertwined with those of Mud and his on-again-off-again girlfriend (Reese Witherspoon, and they face their own issues - mostly to do with identity and love.

This coming-of-age story, written by Jeff Nichols, is superficially about an adventurous week in the lives of two boys, but at its core, it is about discovering, while piecing together another person's life, that you are not the only one with problems. Ellis realises and draws parallels between Mud's life and his, and so does Neckbone, to an extent.

The story is also about finding a kindred spirit in the least likely quarters, and going through the pains of growing up - accelerated by extraordinary experiences that were not expected in the little universe that these boys inhabited.

The movie, though lengthy (more than two hours), does not waver from its essence - that of attaining maturity, not just for the boys, but also for the adults. Myths are shattered, and relationships are changed, as the film heads towards the inevitable end.

And in the background, constantly, is the middle-class America, facing its own set of growing up pains. The loss of innocence is the underlying theme of the movie, and there are no maudlin moments that one would expect in a story dealing with young boys. At times, it is a little too harsh.

Tye Sheridan is a discovery. He makes the audience empathise with him as Ellis, who is reluctant to take off his rose-tinted glasses. He wants to see the good in people, but they betray him every time.

Jacob Lofland's Neckbone is the quintessential all-American adolescent (with "shit" being a large part of his vocabulary), and also the loyal, unquestioning best friend that all of us have had. Both these young actors steal the show from under the noses of the more accomplished actors who star in the movie.

Matthew McConaughey, who made a few bad career choices recently, is now back in the league of serious actors, with his portrayal of Mud. He may be aging, and harrowed, but he knows his art.

Reese Witherspoon has a smaller role than the other actors, but she does her best to depict the white trash that Juniper is. Michael Shannon, a regular in a Jeff Nichols film, has a short but effective role.

The movie is set in Arkansas, and its important character is the Mississippi. It is the river that decides the fate of the characters, and the makers have given it its due importance, especially in the cinematography. The production design brings out the despair and the monotony in the existence of the townspeople, and the costume design only adds to it, sticking to dull and pastel colours in clothes. Most of the music is tuned to the moods of the river, and you hardly notice it, so seamlessly does it blend in with the visuals.

Mud is a must-watch for those who like movies with depth, and also for those who admire Mark Twain and American literature. Jeff Nichols does away with pretentious messages and sentiments. Mark Twain would have been proud of him.
Share. Save. Connect.
Tweet
MUD SNAPSHOT 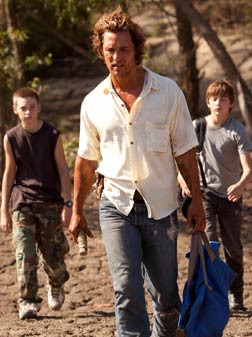 ADVERTISEMENT
This page was tagged for
Mud english movie
Mud reviews
release date
Matthew McConaughey, Reese Witherspoon
theatres list
Follow @fullhyderabad
Follow fullhyd.com on
About Hyderabad
The Hyderabad Community
Improve fullhyd.com
More
Our Other Local Guides
Our other sites
© Copyright 1999-2009 LRR Technologies (Hyderabad), Pvt Ltd. All rights reserved. fullhyd, fullhyderabad, Welcome To The Neighbourhood are trademarks of LRR Technologies (Hyderabad) Pvt Ltd. The textual, graphic, audio and audiovisual material in this site is protected by copyright law. You may not copy, distribute, or use this material except as necessary for your personal, non-commercial use. Any trademarks are the properties of their respective owners. More on Hyderabad, India. Jobs in Hyderabad.