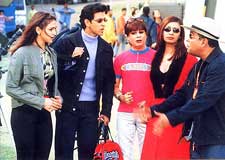 Smriti Kashyap / fullhyd.com
EDITOR RATING
3.0
Performances
Script
Music/Soundtrack
Visuals
NA
NA
NA
NA
Suggestions
Can watch again
NA
Good for kids
NA
Good for dates
NA
Wait to rent it
NA
It is said that only God can make a tree (probably 'coz it's so hard to put the bark on!). In the same vein, only Bollywood can take a heap of mashed potatoes and pass it off as onion uttapam. Smart try, but naaaah, we're too smart for it. After passing off the last heap as 'Navratri Speshul Dhokla' (AMALL), this week Bollywood tries its best to hoodwink us into the usual love triangle. Ha, ha - I was one step ahead of those guys! I actually got hoodwinked and went ahead with the flick!

Set in this age when everybody sufficiently above the poverty line logs on to check mail, Na Tum Jaano Na Hum goes three steps to the side and continues with a good old-fashioned romance via Indian Post. Move over 'You've Got Mail', it's 'Shop Around The Corner' time again!

We all know, thanks to the repeated warnings by Hindi cinema, that we are all made in pairs and that the main purpose of our life is to find the other half of this famed pair. I found mine - it's my dog. But, full of beans, fresh out of boarding school Esha hasn't been this blessed. Moony-eyed most of the time and in love with an 'anjaana, andekha aaawaaaj aur chehera', she finds her missing link in the form of pen pal Hrithik (who she gets to know after requesting the same song on FM - now what greater indication of true and enduring love than having the same song played on the radio by an andekha anjaaana RJ?).

Anyway, she finishes school and spends long hours looking at the letters scrawled by Hrithik - why he uses such dreadful '101 Dalmatians' type of stationary is above and beyond me. Hrithik, apart from writing letters to far off adolescents, spends the rest of the time moonlighting as a fashion photographer and Akshay's (Saif) buddy in arms. Now no woman is complete without the family business of doing something in fashion, and so Esha gets Rahul to work on a fashion shoot for her company (in this case Pantaloons).

Ta ta ta and ta later, we discover that Rahul is really a decent sort and is actually 'checking out' Esha for any manufacturing defects that she may have, for his best pal Akshay to whom she is soon going to be engaged.

This is, of course, all on level 1 where the guys don't know the pen pal waala funda. On the sub terrain level 2, we see Esha unhappy with this alliance and wanting to meet her snail mail pal, convinced, like all heroines, that this bloke is the bloke for her. Rahul soon discovers that his pen pal is none other than Esha - his best bud's fiancée.

They say that he who smiles in a crisis has found someone to blame... Not for our Hrithik. Ol' boy bravely grins and smothers his love for Esha. What happens next happens over the period of about 3 hours and 45 minutes in a slow, agonizing manner, with all the regular lines and mandatory naach gaana. Will Esha marry Saif? Will Saif marry her? Will Hrithik tell Saif? Will Hrithik marry Esha? Will Esha Marry Hrithik? Is Hrithik really in love with Esha? And other such profound questions arise and are answered during the course of the flick.

It's the usual pav bhaji masala mix - though there seems to be a lack of hari dhaniya. None of the songs is great. What you see on TV is what you get. Hummable, sure, but nothing to write home about.

Anyway, I was zapped to see Esha actually come close to acting in this flick. Hrithik and Dream Gal Jr make a pretty interesting looking couple. Saif as usual is Saif, and seems to be permanently cast in the Casanova mould.

Bits and snatches of decency make you watch the film till the end, but if you were planning an entire weekend around this movie, I'd better warn you against it. This flick is just like a colossal calorific helping of chocolate chip ice cream after a really really vivaha bhojanambhu - looks like fun, but you'd be better off without it. Trust me, I'd know... BURRRPPPPPP!
Share. Save. Connect.
Tweet
NA TUM JAANO NA... SNAPSHOT
NA TUM JAANO NA HUM SNAPSHOT

ADVERTISEMENT
This page was tagged for
Na Tum Jaano Na Hum hindi movie
Na Tum Jaano Na Hum reviews
release date
Hrithik Roshan, Esha Deol
theatres list
Follow @fullhyderabad
Follow fullhyd.com on
About Hyderabad
The Hyderabad Community
Improve fullhyd.com
More
Our Other Local Guides
Our other sites
© Copyright 1999-2009 LRR Technologies (Hyderabad), Pvt Ltd. All rights reserved. fullhyd, fullhyderabad, Welcome To The Neighbourhood are trademarks of LRR Technologies (Hyderabad) Pvt Ltd. The textual, graphic, audio and audiovisual material in this site is protected by copyright law. You may not copy, distribute, or use this material except as necessary for your personal, non-commercial use. Any trademarks are the properties of their respective owners. More on Hyderabad, India. Jobs in Hyderabad.