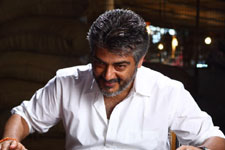 Ravi Kandala / fullhyd.com
EDITOR RATING
4.0
Performances
Script
Music/Soundtrack
Visuals
4.0
4.0
4.0
4.0
Suggestions
Can watch again
No
Good for kids
No
Good for dates
No
Wait for OTT
No
The first question that pops into your mind as you watch Veerudokkade must surely be, "Is there another actor as unmindful of his looks?" In this day and age when heroes go out of their way to look younger, Ajith's insistence on looking at least a decade older than his 43 years is baffling.

The drama and the action sequences are still not bad, but when he dances next to Tamanna wearing an old man's suit and spectacles, the lyrics playing in our head are more from Seetaramayya Gari Manavaralu than of the duets in the Alps.

Veerudokkade was a Pongal release in Tamil Nadu, and has a generous helping of all the masala required for such a release. The film is about Virendra (Ajith), who lives in a village with his four brothers. Virendra believes that if he gets married, the girl who comes in will cause a rift in the brothers, and hence chooses to stay single.

Three of his four brothers, however, have already found the loves of their life, and are busy trying to find a way to convince their brother that love is not all that bad. They decide that the best method to do this is to make the brother fall in love. Providence and some scheming brings in Gomathi Devi (Tamanna) into the picture, and the twain fall in love.

The twist in the story comes in the form of the conflict between Virendra's violent nature and Gomathi's peace-loving family. How Virendra decides to give up his violent ways and is almost immediately forced to take them up again due to a threat to Gomathi's family, forms the plot of Veerudokkade.

The film's direction and script are as stereotypical as can be. Siva, the director, follows the exact template - hero introduction, hero elevation, intro fight, intro song, villain intro, heroine intro, villain-hero confrontation, hero-heroine bonding, thunder and rain, duet, big twist and interval (add generous doses of comedy after every comma). After interval, the format changes to parting, meeting again song, sentiment, brief flashback, action, sentiment, final song, final twist and climax fight. There is not even a hair's breadth of deviation from this format.

Veerudokkade is probably the most masala formula movie that Ajith has done in recent years, and his discomfort with the format shows. The flourishes that a Vijay or a Surya would manage effortlessly seem forced, and the dances in the duets look terribly stiff. Tamanna looks beautiful and displays her stock expressions. The comedian gang, lead by Santhanam, does a decent job, and manages to evoke quite a few chuckles. Devi's tunes sound familiar and the technical values are all professional.

There is really nothing else in the theatres these days, and hence Veerudokkade could be your best bet. The director makes it simple for you by dressing the hero in white and the villain in black - if this is the kind of entertainment you seek, head for the nearest cinema playing this one.
Share. Save. Connect.
Tweet
VEERUDOKKADE SNAPSHOT 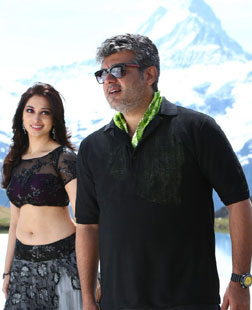 ADVERTISEMENT
This page was tagged for
veerudokkade movie heroine dress
Veerudokkade telugu movie
Veerudokkade reviews
release date
Ajith Kumar, Tamannaah
Follow @fullhyderabad
Follow fullhyd.com on
About Hyderabad
The Hyderabad Community
Improve fullhyd.com
More
Our Other Local Guides
Our other sites
© Copyright 1999-2009 LRR Technologies (Hyderabad), Pvt Ltd. All rights reserved. fullhyd, fullhyderabad, Welcome To The Neighbourhood are trademarks of LRR Technologies (Hyderabad) Pvt Ltd. The textual, graphic, audio and audiovisual material in this site is protected by copyright law. You may not copy, distribute, or use this material except as necessary for your personal, non-commercial use. Any trademarks are the properties of their respective owners. More on Hyderabad, India. Jobs in Hyderabad.