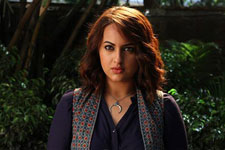 Jaiwantika Dutta-Dhupkar / fullhyd.com
EDITOR RATING
3.0
Performances
Script
Music/Soundtrack
Visuals
6.0
3.0
4.0
7.0
Suggestions
Can watch again
No
Good for kids
No
Good for dates
No
Wait to rent it
No
Akira gives you a very familiar vibe - everything about this film, from its storyline to its star cast, meets you with a sense of familiarity. At some point, in the half-empty theatre, you ask yourself if Sonakshi Sinha as Akira resembles the "Lady Amitabh" Vijayashanti of the '80s (though her character is more on the lines of a vengeful ninja in this film, and she beats the cops up instead).

Akira shows how even the bad guys want to feel good - and why not? Feeling good is everyone's birth-right. However, it tries (yet again) to make a good case for villainy in a three-hour film, and only ends up sounding like the front page of a sensationalist tabloid. Basically, Akira tries to tell you that right things ought to be done in the wrong way. In fact, if Murugadoss is to be believed, that's really the only way to do things; in fact, anyone who doesn't agree will meet a violent end, because they're villains anyway and it's their karma.

In the process of making Akira look like a film with a conscience (LOL) the makers touch upon a mind-boggling variety of social issues. They dwell upon them and then discard them like used toilet paper. It's shocking how serious social issues like those concerning acid attacks, mental health facilities and transgenders have been blatantly trivialized in Akira. By the end of the film, the acid attack victim, the transgender, the asylum etc. are all summarily dumped to one side as the makers try to wrangle a climax by persecuting a Christian priest and showing bloodshed in a church.

The narrative runs on two parallel tracks. There's one that tells you about Akira (Sonakshi Sinha) in Jodhpur who is brought up right if anything at all but who ends up in a home for delinquent children ("remand home") because she tried to avenge an acid attack victim on her father's (Atul Kulkarni's) advice. Mishiekka Arora is good as the young Akira, all dimples and karate chops. Eventually, Akira gets out of the delinquent home and is very keen on completing her education. The story then cuts to when she goes to Mumbai with her mother (Smita Jaykar) to stay with her brother, and enrolls in a local college. Simultaneously, Mumbai cop Rane (Anurag Kashyap) and his cop accomplices want to cover up a heist in which he looted a gangster's dying brother. He finds he's being blackmailed, and Akira is tracked down.

Following this, the film takes a good deal of perverse twists and turns to ensure the audience gets the message that Akira is "somebody who has had to undergo a lot". This "lot" includes being forsaken by her family, getting vilified by the police, and ending up locked up in an asylum. The last time the audience witnessed a lead actor undergoing such torture to entertain the odd sadist in the audience was in Salman Khan's Tere Naam. Again, that this emphasized and celebrated "lot" is nothing positive is abundantly clear. Akira the film is like that, too. It's a complete waste of time and money.

From Akira one gets the whiff of great aspiration. It's that immensely wannabe film that wanted to be a Kurosawa. At one point Sonakshi Sinha is compared to Jesus Christ. Murgadoss, whether he knows better or not, seems to be nostalgic of the plague of martyrdom, and it's always nice when someone else is doing the sacrificing. Thus, in an era when women are trying to break free of their shackles, Murgadoss puts his protagonist back in chains and makes her a martyr. From that angle, the film is pretty superficial. One wonders, if the heroine Akira feels better when she exacts revenge, isn't she at least partly operating on the pleasure principle? What are the chances of her being a martyr if she's operating on the pleasure principle? Unless being a martyr gives her pleasure, which it clearly doesn't.

The film is illogical in other ways as well. Much was made of Sonakshi Sinha's learning sign language for the film, but this is hardly utilized. Sinha is actually quite interesting even in the action scenes as well. It's the only reason why one hopes this film has a sequel, although with a different director. Speaking of the pleasure principle brings to mind Amit Sadh, who plays Siddharth, the romantic interest with whom Sinha has zero chemistry in Akira. He wilts away quietly by himself as the film progresses.

The music by Vishal-Shekar is jarring, and doesn't work for the film. You begin to wonder if they're recycling their tunes. John Stewart Eduri's background score keeps you from concentrating on the film, and signature tunes play annoyingly often for characters. R D Rajashekar's good cinematography captures some aesthetically filmed scenes in the mental asylum, and some action scenes are very well-shot which works for the film.

Murgadoss loved this masterpiece so much that he actually produced it, too. It's a pity the film is nothing new.
Share. Save. Connect.
Tweet
AKIRA SNAPSHOT 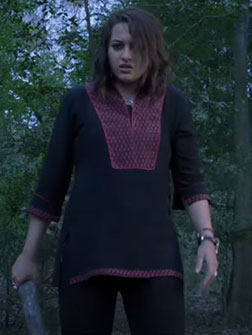 ADVERTISEMENT
This page was tagged for
akira film movie video
Bollywood Akira Saken ki kaki
Akira hindi movie
Akira reviews
release date
Follow @fullhyderabad
Follow fullhyd.com on
About Hyderabad
The Hyderabad Community
Improve fullhyd.com
More
Our Other Local Guides
Our other sites
© Copyright 1999-2009 LRR Technologies (Hyderabad), Pvt Ltd. All rights reserved. fullhyd, fullhyderabad, Welcome To The Neighbourhood are trademarks of LRR Technologies (Hyderabad) Pvt Ltd. The textual, graphic, audio and audiovisual material in this site is protected by copyright law. You may not copy, distribute, or use this material except as necessary for your personal, non-commercial use. Any trademarks are the properties of their respective owners. More on Hyderabad, India. Jobs in Hyderabad.