Mithun Verma / fullhyd.com
EDITOR RATING
1.0
Performances
Script
Music/Soundtrack
Visuals
NA
NA
NA
NA
Suggestions
Can watch again
NA
Good for kids
NA
Good for dates
NA
Wait to rent it
NA
When the young, meek Srinivas joins the college, he has little knowledge about love, girls and generally, life. His only aim in life seems to give some trendy expressions that can be categorized into:

With so much to express, he's waiting for someone equally animated to turn on his mating call. Akhila answers vigorously. She has her own set of expressions: 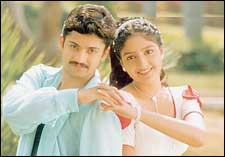 So as the drill master calls 1 2 1, they go happy, hop, happy. But all is not this easy. To memorize numbers, dance steps and lip sync together is quite confusing. Especially when you're not supposed to shake the booty with your mouth and sing with your legs. But to the credit of the lead pair, they do a fine job of not mixing it up too many times.

Now this Akhila girl is a basketball fanatic. She also perhaps is of the opinion that tall men have tall... er, let's call it 'ego' for our family audiences. It seems she'll be impressed if the guy can reach up to the skies and dunk the ball nonchalantly. She'd be even more impressed if he will not miss the basket.

So to impress his love, Adarsh immediately joins a basketball coaching camp under the renowned coach Surya. He trains hard to become a champion in wearing sexy vests and sweating profusely. Ultimately, he makes it to the team.

Once in it, the plot dribbles mercilessly between the court and the courtship. Akhila's bro doesn't really appreciate the hero's steal, and is on fire to block his shots. He introduces certain WWE superstars for the hero to tackle on the court. But eventually the hero slam-dunks the ball and the bad guys together. Don't know about balls, but humans certainly cannot stand body odor. And somehow, in the end, nobody loves this game.

The lead pair, as mentioned earlier, appears to have been wearing too tight pants for their liking. The other departments like music, script, comedy, direction etc. are visible very clearly in the credits. That's all the appearance they do.

ADVERTISEMENT
This page was tagged for
Avuna telugu movie
Avuna reviews
release date
Adarsh, Shanti Rao
theatres list
Follow @fullhyderabad
Follow fullhyd.com on
About Hyderabad
The Hyderabad Community
Improve fullhyd.com
More
Our Other Local Guides
Our other sites
© Copyright 1999-2009 LRR Technologies (Hyderabad), Pvt Ltd. All rights reserved. fullhyd, fullhyderabad, Welcome To The Neighbourhood are trademarks of LRR Technologies (Hyderabad) Pvt Ltd. The textual, graphic, audio and audiovisual material in this site is protected by copyright law. You may not copy, distribute, or use this material except as necessary for your personal, non-commercial use. Any trademarks are the properties of their respective owners. More on Hyderabad, India. Jobs in Hyderabad.