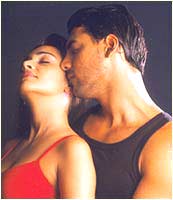 Mithun Verma / fullhyd.com
EDITOR RATING
5.0
Performances
Script
Music/Soundtrack
Visuals
NA
NA
NA
NA
Suggestions
Can watch again
NA
Good for kids
NA
Good for dates
NA
Wait to rent it
NA
Ah, India... land of the magic makers, land of the believers, home of the real life heroes and location of the 'Land of Make Believe Real Life Heroes' - Bollywood! Where no fad is too ridiculous and no plot is too extreme. So check your sanity at the door and hold on as we embark on a journey into another 'make-believe' tar pit of paranormal and supernatural... acting - that will have you screaming and trembling out of fear ...of more.

So, from the makers of the previous movie comes... another one! Pretty boy runt John Abraham was expected to set on fire the pants of his contemporaries and the like of Dino Moreo, Milind Soman and Arjun Rampal by mugging every page of that acting manual for good. A few glimpses of the movie and it's evident that he's done a real good job at that.

He plays Akash, a doc who's really missing his "supposedly" dead love, Maya (Tara Sharma). "Supposedly" since her body's never recovered from the site of the accident. After his perpetual mourning, Akash starts to decipher signals of her presence - dripping of water, fizzing out of bulbs and eerie noises. And all these days we blamed poor old MCH!

These symptoms and feelers continue to haunt Akash until he transfers himself to the paediatric hospital where Maya was working. A few really creepy scenes manage to wring their way into this part of the movie. In the form of the expressions of our hero, that is! The funda about John mugging up the acting manual is true. It's only the execution that leaves a ton to be desired. A suspense-horror thriller banks hugely on sound scares, and the sound production of this one is definitely asking some questions. Maybe not of the peak standard of Bhoot, but not far behind either.

The fact that Akash is growing paranoid is fuelled by the kids in the hospital who swear to have met Maya in a 'tunnel of light' and that she's beckoning Akash to her. Termed loony by everyone, Akash still believes in the unbelievable and retraces Maya into the valley, where her bus was wrecked.

Raj Zutshi plays the village guide, who takes Akash into the dangerous tribal territory where he reckons lay the keys to unlock the mystery behind Maya's death. The suspense in the flick comes undone with the clichéd discovery Akash makes in there.

As is the case with most of the thrillers in our land, a relatively creepy first half is steam-rolled into the mud by some mendacious drivel in the end. A movie of this genre leads up to the end, and when that itself is an uneventful farce, it reflects on the entire movie. Tara Sharma appears only in patches and parts, and it's unfair to call her names. For now, that is.

Mahima Choudary also appears in bits and pieces as Tanya, a friend of Akash and Maya. But her bits and pieces of clothing add nothing to this. It appears that Anurag Basu desperately wanted to repeat the Raaz gag on this one. It has worked, too - this one is nearly as feeble-minded as that.

Apart from a couple of thrills, some decent music and a John Abraham who'll definitely have our underpants in a bunch, this movie has... everything; everything annoying, to be precise. So, for all those who were waiting for a scary movie with the eternal love schtick (ala The Ghost), here's one you should miss.
Share. Save. Connect.
Tweet
SAAYA SNAPSHOT

ADVERTISEMENT
This page was tagged for
Saaya
saaya hindi full movie
Saaya hindi movie
Saaya reviews
release date
Follow @fullhyderabad
Follow fullhyd.com on
About Hyderabad
The Hyderabad Community
Improve fullhyd.com
More
Our Other Local Guides
Our other sites
© Copyright 1999-2009 LRR Technologies (Hyderabad), Pvt Ltd. All rights reserved. fullhyd, fullhyderabad, Welcome To The Neighbourhood are trademarks of LRR Technologies (Hyderabad) Pvt Ltd. The textual, graphic, audio and audiovisual material in this site is protected by copyright law. You may not copy, distribute, or use this material except as necessary for your personal, non-commercial use. Any trademarks are the properties of their respective owners. More on Hyderabad, India. Jobs in Hyderabad.