Spy Kids: All The Time In The World (4D) Review 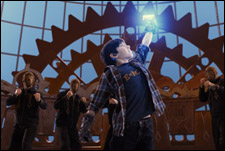 Samrat Sharma / fullhyd.com
EDITOR RATING
4.0
Performances
Script
Music/Soundtrack
Visuals
4.5
2.5
4.0
5.0
Suggestions
Can watch again
No
Good for kids
Yes
Good for dates
No
Wait for OTT
No
Children are lucky to have Robert Rodriguez. In between his ultra-violent action shockers, he makes fun little films for kids with the same enthusiasm and creativity, and while he panders to what kids like most, he never makes a stupid, soulless film. His Spy Kids films have been consistently entertaining in their high tech fantasy for children, and have been relatively successful as well.

Ultimately kids' entertainment has become very sophisticated these days, with animated features exploring big themes and favouring a slightly mature tone over pandering to poop jokes. The newest Spy Kid has no interest in that, and as a consequence, feels dated and out of time (see what I did there?).
Share. Save. Connect.
Tweet
SPY KIDS: ALL THE... SNAPSHOT
SPY KIDS: ALL THE TIME IN THE WORLD (4D) SNAPSHOT

ADVERTISEMENT
This page was tagged for
spy kids 4
Spy Kids: All The Time In The World (4D) english movie
Spy Kids: All The Time In The World (4D) reviews
release date
Jessica Alba, Joel McHale
Follow @fullhyderabad
Follow fullhyd.com on
About Hyderabad
The Hyderabad Community
Improve fullhyd.com
More
Our Other Local Guides
Our other sites
© Copyright 1999-2009 LRR Technologies (Hyderabad), Pvt Ltd. All rights reserved. fullhyd, fullhyderabad, Welcome To The Neighbourhood are trademarks of LRR Technologies (Hyderabad) Pvt Ltd. The textual, graphic, audio and audiovisual material in this site is protected by copyright law. You may not copy, distribute, or use this material except as necessary for your personal, non-commercial use. Any trademarks are the properties of their respective owners. More on Hyderabad, India. Jobs in Hyderabad.