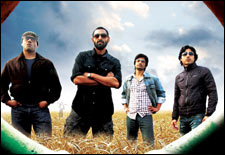 Nupur Barua / fullhyd.com
EDITOR RATING
5.5
Performances
Script
Music/Soundtrack
Visuals
6.0
7.0
6.0
6.0
Suggestions
Can watch again
Yes
Good for kids
No
Good for dates
No
Wait to rent it
No
Parvin Dabas is best remembered for his roles in Monsoon Wedding and Khosla Ka Ghosla, and the Piya Re music video, of course, but after his directorial debut, Sahi Dhande Galat Bande, things are going to be different.

Now he will be known as a director who is sensitive to social issues, and who is not too eager to be in the limelight as he tackles those issues via the medium of film.

The movie begins with the definition of the Land Acquisition Act, and the information that an Indian's fundamental right to property was abolished in 1978. The title montage is a delightful series of clips, in home video style, of 4 young boys running through mustard fields and whiling away time.

In the present day, Rajbir (Parvin Dabas) is free after a year of imprisonment, and his childhood friends, Sexy (Vansh Bhardwaj), Ambani (Ashish Nair) and Doctor (Kuldeep Ruhil) land up to pick him up. The narrator, Doctor, explains that these friends are a part of a gang run by Fauji (Sharat Saxena), and that when there is not much to do, these men indulge in random shootouts and races with rival gang members.

Rajbir is quite attached to his aunt (Neena Kulkarni), who disapproves of his criminal record, and who is involved with a group of non-violent protestors, mostly farmers, opposing the right of the government to snatch their land. Their leader is Malik (Yashpal Sharma), an effective orator.

The land in question is the village of Kanjhawala, on the outskirts of Delhi, where Rajbir and his friends grew up. The Chief Minister, Jaya Gulati (Kiran Juneja), has promised a builder, Aggarwal (Anupam Kher), this piece of land for redevelopment.

Rajbir is affected when he realises that Fauji wants him to get rid of the protestors. Given his personal ties with the villagers, Rajbir tries to handle matters his own way, and things begin to go wrong.

The first half of the movie is interesting, but the second half drags quite a bit. It seems almost as if the director feels the need to repeat the importance of the issue.

Some scenes are overdone and easily avoidable, such as the sequence where all of them need to booze like there is no tomorrow so that they can ideate. There are some genuinely funny moments, but they are few and far between.

Rajbir's character seems a little inconsistent. He is the strong silent type through most of the movie, but there are times when he falters. Must have been tough for Parvin Dabas to direct himself as an actor. He tries not to be in every frame even though he is the protagonist, and he makes Doctor narrate the sequence of events covered in the film.

All the actors are good, and talented, but they do not appear to be giving their all to their characters. This, again, is possibly the fault of the director, and the debuting youngster, Udit Khurana, mumbles and looks confused.

Vipin Sharma is quite wasted as the Chief Minister's PA. Neena Kulkarni is convincing as the tai.

Preeti Jhangiani makes an appearance as a reporter, and she looks refreshed and calm. She is the producer of the film. Tena Desae as the photographer girlfriend resembles Priyanka Chopra a bit, but looks promising.

The production design is simple, and repetitive, which is reassuring. The Chief Minister's house and Aggarwal's office look like studios; otherwise there are plenty of outdoor sequences that add to the realism of the movie.

The drabness and monotony of the region is incorporated well into the movie, but the action sequences in high speed are a bit over the top. The rustic music could have been explored a little more.

This is Parvin Dabas's first movie, and he does not really disappoint. There is, however, the hope that he will do much better, and give us more films that deal with real issues. Sahi Dhande Galat Bande is worth a watch, for its respectable intentions, and for having its heart in the right place.
Share. Save. Connect.
Tweet
SAHI DHANDHE GALAT BANDE SNAPSHOT

ADVERTISEMENT
This page was tagged for
Sahi Dhandhe Galat Bande hindi movie
Sahi Dhandhe Galat Bande reviews
release date
Parvin Dabas, Vansh Bhardwaj
theatres list
Follow @fullhyderabad
Follow fullhyd.com on
About Hyderabad
The Hyderabad Community
Improve fullhyd.com
More
Our Other Local Guides
Our other sites
© Copyright 1999-2009 LRR Technologies (Hyderabad), Pvt Ltd. All rights reserved. fullhyd, fullhyderabad, Welcome To The Neighbourhood are trademarks of LRR Technologies (Hyderabad) Pvt Ltd. The textual, graphic, audio and audiovisual material in this site is protected by copyright law. You may not copy, distribute, or use this material except as necessary for your personal, non-commercial use. Any trademarks are the properties of their respective owners. More on Hyderabad, India. Jobs in Hyderabad.