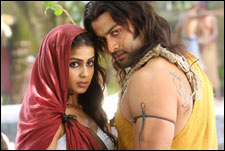 Deepa Garimella / fullhyd.com
EDITOR RATING
6.0
Performances
Script
Music/Soundtrack
Visuals
8.0
6.0
7.0
9.0
Suggestions
Can watch again
No
Good for kids
No
Good for dates
Yes
Wait for OTT
No
Rain-washed Kerala through the eyes of Santosh Sivan is never a bad bet.

Add to that an utterly watchable cast and some delicious war melodrama, and viola, there's your childhood Chandamama bedtime story brought alive like little else. Handsome, gallant warrior to boot.

Urumi, despite the gore and violence, is a pretty uncomplicated folk tale of one brave hero's triumph against the odds that his land faces. Spanning across quite a few kingdoms of 16th century Kerala, the story is based on the indignation of the natives of the Malabar coast against Portugese rule. The triumph of the flick is not in its technicalities as much as it is in getting its "feel" right.

The story begins in the present day, with a look at the lives of 2 friends, one of whom, Krishnadas (Prithviraj) has just come to know that he has some ancestral property in Kerala that he can sell off for a hefty amount to a mining company. When he and his friend (Prabhu Deva) visit the land, they discover that the tribals there are under the threat of their civilization being wiped out.

These tribals have an intriguing story to tell, and thus begins the journey into the past, where Chirakkal Kelu Nayanar (Prithviraj) is a brave warrior on a mission to take kill Vasco Da Gama (Robin Pratt). Kelu is set upon taking revenge on Da Gama for his atrocities on the locals.

When Kelu and his trusted friend, the Muslim Vavvali (Prabhu Deva), save a princess (Nithya Menen) from being abducted, they are suspected of being attackers themselves, and are taken to the royal palace to be put to death for their "crime". How Kelu's path towards Vasco gets cleared forms the rest of the plot.

Urumi's biggest shortcoming is this: it is a dubbed flick. The film lays on the charm thick and nice, and it all seems such a waste since this is in a language and culture alien to you.

The narrative tends to slow down in places where Sivan inserts intricately-choreographed fights, and the sequence of events gets predictable some times. There's also the problem of the heavy-duty Telugu making things hard to follow at places, in addition to the culture overkill.

On the whole, despite the slightly theatrical way the plot carries on and the actors mouth lines, Urimi is as cinematically pleasing as it gets, and quite gripping. Some of the costumes are Asoka-esque (in fact, the whole flick does remind you a bit of Asoka), but the rest are pretty authentic. The cinematography is, predictably, a treat. Watching Urumi on the big screen sure seems a better deal than catching it on a small one (with commercial breaks).

Vasco Da Gama's brutalities against the locals, coupled with Kelu's acts of revenge make for some graphic violence, but otherwise, there are snatches of history interestingly captured. The obsoleteness of Indian native weapons when compared to the more powerful guns and cannons of the Western invaders is one such.

Women, in particular, are likely to be besotted by the movie. Prithviraj seems as invincible a screen God as the supremely dashing warrior he plays. It's hard to say who this little victory really belongs to - Prithviraj himself, for his charisma; or Santosh Sivan, for the near-perfect packaging of the traditional horse-riding hero and his conquests.

Prithviraj acts brilliantly, and with the exact amount of smouldering intensity his role demands. He and Genelia share some great chemistry, in a romance that lends a lot of character to the plot. Genelia plays a Muslim warrior princess - a role that demands more martial art skill than emotion - with dignity. Jagathy Sreekumar as the mahamantri is phenomenal.

Prabhu Deva's comedy and Nithya Menen's come-hither looks form another romantic track angle. The pairing of these two, by the way, isn't convincing, and is mostly awkward. This, despite the fact that both brim over with talent.

The rest of the dazzling star cast you see in the promos isn't really there - Arya has some scenes, Vidya Balan (who also has a bizarre song to her credit) has fewer, and Tabu is featured only in one song.

The music is in tune with the film's general mood, but there are disappointingly no melodies.

Urimi is pretty impressive a film, but if it were a "straight Telugu" offering, we'd have actually stayed awake right till the end.
Share. Save. Connect.
Tweet
URUMI SNAPSHOT

ADVERTISEMENT
This page was tagged for
BOOT URUMI
Urumi telugu movie
Urumi reviews
release date
Prithviraj Sukumaran, Prabhu Deva
Follow @fullhyderabad
Follow fullhyd.com on
About Hyderabad
The Hyderabad Community
Improve fullhyd.com
More
Our Other Local Guides
Our other sites
© Copyright 1999-2009 LRR Technologies (Hyderabad), Pvt Ltd. All rights reserved. fullhyd, fullhyderabad, Welcome To The Neighbourhood are trademarks of LRR Technologies (Hyderabad) Pvt Ltd. The textual, graphic, audio and audiovisual material in this site is protected by copyright law. You may not copy, distribute, or use this material except as necessary for your personal, non-commercial use. Any trademarks are the properties of their respective owners. More on Hyderabad, India. Jobs in Hyderabad.