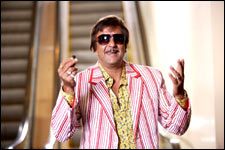 Nupur Barua / fullhyd.com
EDITOR RATING
3.0
Performances
Script
Music/Soundtrack
Visuals
4.0
2.0
3.0
5.0
Suggestions
Can watch again
No
Good for kids
No
Good for dates
No
Wait for OTT
No
Comedy in our film industry, especially in Bollywood, lacks more than wit - it lacks intelligence. Of late, meaningless humour may have found its audience in the masses, but to take advantage of that by imposing a Chatur Singh Two Star on them is plain and simple cruel. Genocide seems kinder.

Crudely inspired by the Pink Panther series, Chatur Singh Two Star is about Chatur Singh (Sanjay Dutt), a cop with two stars on his uniform.

He believes that he is a brilliant detective, and leaves a mess wherever he goes. He is the bane of Commissioner Sinha's (Anupam Kher) existence. The latter has to ingest various pills to control the various attacks (anxiety, panic, heart, ulcer, blood pressure, and others) caused by Chatur.

When corrupt politician Wai Wai Singh (Gulshan Grover) is hospitalised, his secretary Sonia Verma (Ameesha Patel) finds herself in a situation that she cannot get out of. She has to make a choice between her family and her employer.

The action shifts to South Africa after a point, because there is this one man who has a lot of diamonds hidden away. Post-interval, everybody in the film looks for this man. A few animal body suits (including a gorilla suit, the epitome of Hindi movie comedy) later, all is well that ends well.

Needless to say, there is no story. There is not even a semblance of one. Sanjay Dutt has never, in his entire career, hammed so badly. To top it all, the ridiculous wig and various other disguises make him look 10 years older. Dutt does not even try to be convincing, and just breezes through the flick, bored out of his mind.

Ameesha Patel has no clue what the movie is about, and no idea what she is doing there. All she does is pout and show skin. Anupam Kher overacts and does his stuff, but the jokes are just not funny.

Suresh Menon, as Chatur's chum, Pappu Panther, is terrible. He is better off hosting shows. Vishwajeet Pradhan as Sinha's crony fares slightly better - at least his efforts, no matter how wasted, seem sincere.

Satish Kaushik and Shakti Kapoor are totally washed out. Murli Sharma makes serious faces, and Rati Agnihotri is as clueless as a dodo.

Production design is below standard, and the music, even worse. Cape Town looks like Lokhandwala, and that speaks more than volumes for the cinematographer. The costume design is appalling, whether the character has to look funny or sexy.

One walks away from the film with the impression that the makers took some financiers for a ride and came up with this sorry excuse of a movie to make amends. Watch Chatur Singh Two Star if you have plenty of time to spare, but, be warned - you may get suicidal at the end of it, or burst into tears of helplessness.
Share. Save. Connect.
Tweet
CHATUR SINGH TWO STAR SNAPSHOT

ADVERTISEMENT
This page was tagged for
Chatur Singh Two Star hindi movie
Chatur Singh Two Star reviews
release date
Sanjay Dutt, Ameesha Patel
theatres list
Follow @fullhyderabad
Follow fullhyd.com on
About Hyderabad
The Hyderabad Community
Improve fullhyd.com
More
Our Other Local Guides
Our other sites
© Copyright 1999-2009 LRR Technologies (Hyderabad), Pvt Ltd. All rights reserved. fullhyd, fullhyderabad, Welcome To The Neighbourhood are trademarks of LRR Technologies (Hyderabad) Pvt Ltd. The textual, graphic, audio and audiovisual material in this site is protected by copyright law. You may not copy, distribute, or use this material except as necessary for your personal, non-commercial use. Any trademarks are the properties of their respective owners. More on Hyderabad, India. Jobs in Hyderabad.