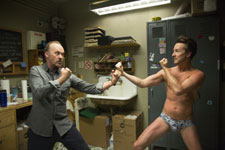 Nupur Barua / fullhyd.com
EDITOR RATING
9.0
Performances
Script
Music/Soundtrack
Visuals
9.0
9.0
6.0
9.0
Suggestions
Can watch again
Yes
Good for kids
No
Good for dates
No
Wait for OTT
No
A dark comedy, by definition, is based on farcical and gloomy humour, and is, more often than not, controversial. Its fantastical, surreal take on everyday life is the key attraction, ideally, and the setting is usually grandiose. Birdman, by the intriguing Alejandro G Innaritu, is a film that definitely belongs to this genre, but it is more character-driven than other movies of this category, and is therefore more complicated. Not to say that it is not enjoyable. First, however, the story.

Riggan Thomson (Michael Keaton) is in the process of presenting his Broadway play, based on Raymond Carver's short story "What We Talk About When We Talk About Love", in an 800-seat theatre. He is the writer, director and actor in this play, and his best friend and attorney, Jake (Zach Galifianakis), is the producer. The situation is tense, because his co-actor Ralph is terrible, and the makers badly need a replacement.

So when an overhead light falls on Ralph's head, rendering him useless (to the play, at least), Riggan is pleased. He claims, to Jake, that he willed this accident. Jake brushes this aside, but what he does not know is that Riggan is convinced of his own telekinetic and other supernatural powers. You see, Riggan was once a popular Hollywood star, and the lead actor of a superhero franchise named Birdman, about 20 years ago. Riggan has conversations in his head with Birdman, who constantly reminds him that he is a superstar.

Riggan spends most of his time between his green room and the stage. His daughter Sam (Emma Stone), who is just out of rehab, is his assistant. There's a problem - one of his actors, Laura (Andrea Riseborough), may just be pregnant with his child. Worse, Ralph may sue the company for the accident. Things appear to seem better when in comes Mike Shiner (Edward Norton), whom Lesley (Naomi Watts), the fourth actor in the play, manages to bring in as Ralph's last-minute replacement.

Life, for Riggan, however, instead gets worse after Mike, an obnoxious, self-important method actor, throws his tantrums, weight and attitude around. Sam is however fascinated by the actor, who has managed to overshadow Riggan. The latter then finds himself chatting up the Birdman more often. Is Riggan delusional? Or does the Birdman really exist, as his very tangible alter ego? Is Riggan capable of moving mountains, metaphorically speaking? Or is he just a washed-out actor who needs to let go of his delusions of grandeur? The film is an engaging answer to all that.

Birdman depicts Riggan's battles with himself and the world every day, and his exhaustion with it all. The story is limited to just a few days of his life, but they are enough to give you more than a glimpse of just how complicated human nature is. Every single person involved in the play has their own agenda, but it is not a tale of dramatic action or melodramatic angst. It is a story of everyday humdrum existence.

Riggan's biggest worry is that his self-perceived genius will not be recognised. He hates the fact that he has to depend on critics to endorse him. As the story progresses, he veers away from reality for longer periods of time, only to be jolted right back into it. Perversely, the screenplay, with its tight structure and meandering sequences, makes him more and more human, and thus relatable, with every new sequence. All the other characters in the story have issues and complexes, too, and they all hide their insecurities behind veils of arrogance. Riggan is actually the simplest of them all, despite his complicated demons.

The script also very cleverly blurs the line between on-screen real life and the stage. It becomes a play within a movie, and soon, you no longer know who the real Riggan or Mike, or even Laura or Lesley, are. Jake is the voice of reason - it may be the writer's intention to make him our, the audience's, representative - in this madness. You can feel yourself sinking into the depression and ennui of these characters, and you will probably find yourself questioning your own sanity after a point. Birdman is a reflection of life at its lowest, almost, but without the hysterics.

The film's dialogues are taken from everyday conversations that people have, but with a tinge of madness. Not that anybody is a certified lunatic in the story, but they are not what can be considered normal, either. They are the uncomfortable reminders of what human beings really are, beneath the facades of decency and politeness. Innaritu sees, like we do, the flaws in human beings, but he is not scared to portray them in his narration of life.

And through it all, there is wit, and also plenty of sarcasm, questioning the way we perceive successes and failures. We are happy with mediocrity, which is why we think that the pursuit of excellence is insanity. Casting Michael Keaton, who once played Batman, to play the role of a forgotten superstar who played Birdman, is pure genius.

The film has been edited to look like it has been shot in one continuous long take. Transitions are made with long shots of the skyline (day to night, and vice versa), or of corridors and other spaces. This format obviously requires superior choreography, and it does not disappoint. The camera work is the real star in the movie.

The production design lovingly sets up every detail of the inside of a theatre house, and no space is unexplored, not even the dark staircases. The costumes are not pretty or grand, and the cinematography is definitely not startling, but they are effective. The editing, though subtle, is by far one of the best we can expect this year.

Michael Keaton delivers his best performance yet. He plays a normal man who is restless, but has no reason to be. His frustration becomes yours as he slowly loses it. After watching the movie, you cannot think of anybody more suitable to play the aging, jaded Riggan, who is still waiting for that one shot at brilliance.

Edward Norton is suitably evil, yet vulnerable enough for you to not hate him. Naomi Watts and Andrea Riseborough play the more complicated beings in this circle, who are too self-involved to think of themselves as anything more than victims. Emma Stone and Zach Galifianakis are underused, relatively. Both are definitely out of their comfort zones in their choices of roles in this movie - the usually onscreen sunny girl is a sulking one, and the always-eccentric idiot is the smart one here.

Birdman is not an easy film to watch. It is also not a very happy film. It can leave you stunned and depressed, and reflective. It is not very comprehensible at first watch, though it is not a complicated movie, either. Does all that mean you should avoid it? Absolutely not, but it is entirely your call. Just know that it is not an entertainer, and may make a philosopher out of you, or worse, make you unhappy with yourself, if you empathise with the protagonist. 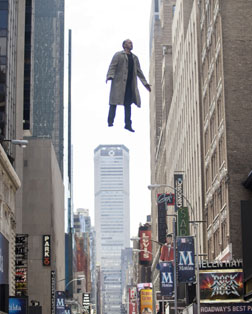 ADVERTISEMENT
This page was tagged for
Birdman english movie
Birdman reviews
release date
Michael Keaton, Emma Stone
theatres list
Follow @fullhyderabad
Follow fullhyd.com on
About Hyderabad
The Hyderabad Community
Improve fullhyd.com
More
Our Other Local Guides
Our other sites
© Copyright 1999-2009 LRR Technologies (Hyderabad), Pvt Ltd. All rights reserved. fullhyd, fullhyderabad, Welcome To The Neighbourhood are trademarks of LRR Technologies (Hyderabad) Pvt Ltd. The textual, graphic, audio and audiovisual material in this site is protected by copyright law. You may not copy, distribute, or use this material except as necessary for your personal, non-commercial use. Any trademarks are the properties of their respective owners. More on Hyderabad, India. Jobs in Hyderabad.