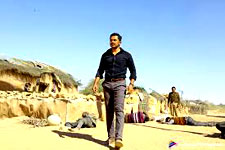 Josh / fullhyd.com
EDITOR RATING
7.0
Performances
Script
Music/Soundtrack
Visuals
6.0
7.0
5.0
8.0
Suggestions
Can watch again
Yes
Good for kids
No
Good for dates
Yes
Wait to rent it
No
It is next to impossible to dislike Rakul Preet Singh. Her playful countenance, congenial attitude, lack of airs, and the fact that she speaks Telugu like a champ all make her an immensely likeable person. Regrettably, however, they don't make her an actress. If you were to cast her as a Delhi-born Punjaban who models and comes to the South looking to act in regional films (the keen reader will observe we're very much describing Rakul Preet Singh herself), she'll still look out of place in the role. Given this, you'll appreciate the general preposterousness of casting her as a local "ooru" Tamil girl and have her negotiate chemistry with a police officer husband.

Disappointingly, this is the very emotional core of the film which is supposed to inform us of how and why the police officer husband functions the way he does. He is supposed to share a deep loving bond with his wife while all we see is two actors awkwardly trying to make sense of the intimacy they seem to be forced into. There isn't a moment in Khakee where you buy this bond of theirs. It's all too silly, too superficial and too distant.

This distance that separates an audience from their film isn't a problem in a film which is designed and put together as a shopping bag of six fights, one intro song, two duets each with each heroine, an item number, half kilo amma sentiment, three packets of comedian bashing, a strip of cleavage, and 360 degrees of hero elevation. But there you will begin to see the matter of concern - Khakee isn't a grocery list. It's a thumping action thriller whose director (H Vinoth) is yet to completely shake off the supermarket philosophy of making films.

Khakee is the story of earnest cop Dheeraj Hariprasad who gets hot on the trail of an elusive, skilled and utterly vicious gang of burglars who employ animal hunting techniques on their human victims (it's an incredibly gory film by the way - perhaps even gorier than last week's murder fest Detective). The movie is really a procedural on how the indefatigable police team combs through the country (while also missing their families, shivering in the biting North Indian cold, and throwing up bad dhaba food) looking for fingerprint matches in prison registers to track down and contain the notorious gang. If the tracking down is tough, the containing is tougher, and often fatal.

Being based on true incidents, Khakee profits from real detail and eschewing mass film staples such as ten people walking up to the hero and getting diligently beaten up. Khakee, too, has such a boring fight where Karthi pulverises a few villains, but in a few minutes the tables turn, excitingly and hilariously, when he and his fleet are attacked and chased by a seething bunch of villagers. The difficulties are legitimately intimidating and, thereby, great fodder for later payoffs.

And Vinoth, when he forgets that he's working in a supermarket, can be an interesting director. There is a voiceover talking about getting related crime files from multiple states such as Haryana, Punjab, UP, MP and Odisha, and the visual is of a bunch of empty racks getting filled up with files. His camera zooms out of a scene of crime and flies over long stretches of forests before stopping on a mine where there is an explosion. A horse and its rider suddenly jostle into a frame which features a dead cow skull in the desert sand. And the limited palette animation he uses for exposition makes it feel as interesting as the main plot itself.

Like the recent Garuda Vega, Khakee, too, is happy making its star work for his laurels. This is a film where the protagonist and his band deal with hardships more than they see success. And Karthi is very much game. As an officer who is frequently thwarted, ridiculed, and later ignored, Dheeraj Hariprasad is required to demonstrate a steely resolve which lets you want to stand by him even if his superiors don't. Karthi gives us that, and also the hope that he'll choose more of these well-worked scripts than empty star vehicles.
Share. Save. Connect.
Tweet
KHAKEE SNAPSHOT 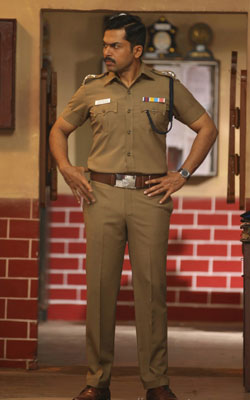 Great review, Josh. The gore is definitely a motivating factor to watch this movie. I was waiting for fullhyd's review to come out, will try to watch this one over the weekend. How come you guys haven't reviewed this week's biggie, Justice League, yet?
Josh on 18th Nov 2017, 2:34pm | Permalink
Dude! PSV Garuda Vega is the film you're talking about. It is the best Telugu film I've seen in months or possibly even the last whole year.
sc13175 on 23rd Nov 2017, 2:21am | Permalink
I missed PSV. I really wanted to catch that in theatre. Will have to wait for DVD to show up.

ADVERTISEMENT
This page was tagged for
Khakee telugu movie
Khakee reviews
release date
Karthi, Rakul Preet Singh
theatres list
Follow @fullhyderabad
Follow fullhyd.com on
About Hyderabad
The Hyderabad Community
Improve fullhyd.com
More
Our Other Local Guides
Our other sites
© Copyright 1999-2009 LRR Technologies (Hyderabad), Pvt Ltd. All rights reserved. fullhyd, fullhyderabad, Welcome To The Neighbourhood are trademarks of LRR Technologies (Hyderabad) Pvt Ltd. The textual, graphic, audio and audiovisual material in this site is protected by copyright law. You may not copy, distribute, or use this material except as necessary for your personal, non-commercial use. Any trademarks are the properties of their respective owners. More on Hyderabad, India. Jobs in Hyderabad.