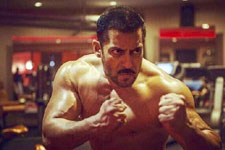 Josh / fullhyd.com
EDITOR RATING
6.0
Performances
Script
Music/Soundtrack
Visuals
7.0
4.0
6.0
8.0
Suggestions
Can watch again
No
Good for kids
Yes
Good for dates
Yes
Wait for OTT
Yes
It's a fantastic premise. A run-down desi wrestler on a Mixed Martial Arts (MMA) platform. The differences in style, attitude and age make for smashing action. And when you bring in Salman Khan to play the Haryanvi pehelwan, you can already hear the whirring of the note-counting machines.

Further, it's a fascinating plot. Aimless youth Sultan (Salman Khan) falls in love with the beautiful Aarfa (Anushka Sharma). Except, Aarfa isn't your ordinary ghunghat-drawing jat girl. Born in Haryana (the state with the worst rate of female infanticide), this superb lady takes up wrestling to show that the daughter can achieve as much as the son. She has a dream - and little patience for wastrels like Sultan, and tells him as much. Stung, he takes up wrestling, aces it, and upon achieving mind-numbing success, loses all to his arrogance. Now he has to fight to overcome.

Finally, it's a far-reaching moral. The one you must conquer is not your opponent, but yourself.

All put together, it is an impressive story, and writer Ali Abbas Zafar would normally warrant a polite doffing of your hat.

We've said this before about filmmaking - Show, Don't Tell. The very crux of creative work is to communicate an emotion or an idea by means of subtle craft. Instead, what many do is matter-of-factly inform the patron that this is the emotion they ought to feel or this is the idea that they are being conveyed. The difference is one of experiencing an emotion listening to music that moves your soul as opposed to reading about it on Wikipedia.

Zafar takes a Wikipedia approach to creative art. He makes Salman Khan tell us every single thing we're supposed to feel or understand, throughout the movie. For instance, the primary motif of the film, that you have to conquer yourself and not your opponent, is elaborately explained innumerable times, and towards the end it becomes too damn literal. But nowhere do you actually feel that sink into your mind. We felt like third-grade students repeating the same lesson five times to commit it to memory but never really getting a glimpse of what the lesson seems to be conveying.

A script like this automatically makes the performances suffer. Salman Khan, Anushka Sharma and Randeep Hooda all do what they can, but they can only do so much when they are primarily used as mouthpieces to utter the heavy dialogue. They all try to bring their own nuance, but this isn't a film which asks them to. Sharma in particular gets a splendid role which commands much more meat than the script affords it.

Speaking of performances, we have to acknowledge the superb physical work of Khan. The man is buff as ever and perhaps more agile than he has been in a while. The MMA portions towards the end greatly benefit from the physicality he brings to them. Also, the visuals (Artur Zurawski) and the score (Julius Packiam) of these portions serve his wrestling tackles and punches well. As far as Bhai films go, Sultan is going to be very, very satisfying fare for the fan.

But Sultan isn't your usual Bhai film. It takes the Bajrangi Bhaijaan (a film we couldn't help loving) route where Kabir Khan cooks a serious plot with generous Bhai elements to spice it. Sadly, Zafar can't boast of that talent to make a mass film which also stays true to its foundations. He doesn't succeed at sewing together the disparate comic, melancholic and inspiring bits. The seams show, and they often tear away to further make the shifts jarring.

It isn't so much that nothing works. Various different things work. Like this superb scene where Hooda calls Sultan a dead person. In the second most uncharacteristic topless Bhai scene (the first being in Bajrangi Bhaijaan where he gets whooped by the police), Sultan stares at his paunch in a mirror trying to fight the tears of humiliation. Aside from that, various jokes work (Anant Sharma as Govind is a nice humorous presence). As do a couple of songs (not Vishal-Shekhar's best work but pleasant music nonetheless).

Yup, a bunch of things individually work. But the thing with an Indian drama film is you aren't just looking for stray pleasures. You know these stories have the power to make you feel intense emotions. What you expect is a shower, a strong and thundering one which soaks you up. You willingly go to the halls spreading your arms to these torrents that Sultan promises in its promos. You see mighty dark clouds ready to precipitate. And then they barely drizzle, and they blow away. If that were to be the case, you might as well watch Bodyguard or Kick instead.

To summarise, Sultan is a Salman Khan film which succeeds as a fan appeaser but fails to live up to its aspirations. We're reminded of that thing Sultan keeps saying - that you don't fight the opponent, you fight yourself. With YRF as producer and Salman Khan in the lead, Zafar didn't really have any opponents to thwart his film. He had only himself to fight.
Share. Save. Connect.
Tweet
SULTAN (2016) SNAPSHOT 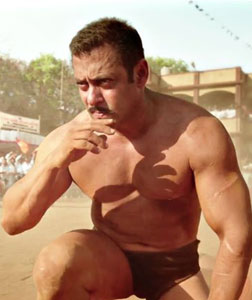 ADVERTISEMENT
This page was tagged for
sultan hindi full movie 2016
Sultan (2016) hindi movie
Sultan (2016) reviews
release date
Salman Khan, Anushka Sharma
Follow @fullhyderabad
Follow fullhyd.com on
About Hyderabad
The Hyderabad Community
Improve fullhyd.com
More
Our Other Local Guides
Our other sites
© Copyright 1999-2009 LRR Technologies (Hyderabad), Pvt Ltd. All rights reserved. fullhyd, fullhyderabad, Welcome To The Neighbourhood are trademarks of LRR Technologies (Hyderabad) Pvt Ltd. The textual, graphic, audio and audiovisual material in this site is protected by copyright law. You may not copy, distribute, or use this material except as necessary for your personal, non-commercial use. Any trademarks are the properties of their respective owners. More on Hyderabad, India. Jobs in Hyderabad.