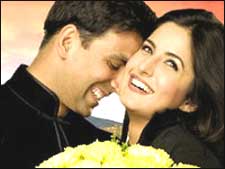 Kavita Krishnamoorthy / fullhyd.com
EDITOR RATING
7.0
Performances
Script
Music/Soundtrack
Visuals
NA
NA
NA
NA
Suggestions
Can watch again
NA
Good for kids
NA
Good for dates
NA
Wait for OTT
NA
HDKG serves as a refreshing delight to an off-late entertainment starved audience who come to watch movies with the right purpose – to kick off their shoes, sit back and relax. Supposedly inspired from the life of a friend of the director, the story builds up quickly yet adeptly, with promising performances from the most unexpected sources.

Aditya Malhotra (Akshay Kumar) is an automobile engineer, and a flamboyant romantic at heart. He is engaged to Sonia (Bipasha Basu), a very career-minded high-flying fashion designer who considers things such as expressing feelings and having a pompous wedding a bunch of unnecessary hotchpotch. Basically, Aditya and Sonia are on totally different wavelengths, and yet Aditya finds himself making an attempt to emotionally connect with his fiancé.

However, Aditya gets a promotion and has to go to Canada as a part of his training program, and Sonia leaves for Paris for an international fashion event. In Canada, Aditya ends up with a Pakistani roomate, Nawab Sharif (Vivek Shauq), while his sister (Bhagyashree) and her family (Mahesh Thakur and Raj Kanwar Jr.) are also living in Canada, along with her half-deaf mother-in-law (Helen).

While in Canada, Aditya keeps repeatedly bumping into Jiya Yashwardhan (Katrina Kaif) and offers her the explanation that it's destiny bringing them together. Jiya, however, is only half-convinced. They are quickly filled in on each other's "availability status" and yet continue to hang out as friends, and slowly yet steadily start getting comfortable in each other's company.

We quickly learn that Jiya herself is engaged to a business tycoon, who has no time to even accompany her for their wedding shopping, and as a result she finds herself leaning onto Aditya for emotional support. All this happens during the first half, replete with some good foot-tapping numbers - and what makes it worth it is that the story is actually quite credible.

After all is said and done (and sung and danced), we're finally introduced to Jiya's much-talked-about but yet-to-be-seen fiancé right before the interval. And much to the disappointment of the female section of the audience, it's only a haggard-looking Anil Kapoor playing the role of Karan Oberoi.

Karan's secretary Jennifer (Shernaz Patel) warns Jiya of the consequences of her escapades, by revealing some not-so-pleasant stories about her boss. But Jiya, being the daughter of a tycoon herself, is inevitably drawn to Aditya as she finally gets the feel of a family that she never had.

As predicted, the film ultimately ends up as a battle between tradition and love, and there are no prizes for guessing the outcome. The songs in the this half aren't as alluring, and you find yourself praying for some mundane dialogues instead.

There are plenty of shop-lifted scenes from both movies and advertisements (and email forwards). For instance, the Mastercard ad scene with the punchline "Having a girlfriend whose father has a sense of humor – priceless!" is reproduced in the scene where Aditya is literally begging Sonia for a kiss, with his hand on the front door speaker, on the night of their engagement.

Similarly, the confrontation scene between Jiya and Karan is a direct replica of Billy Zane's outburst against Kate Winslett in Titanic. But the cheesiest rip-off would have to be the strange scene in the climax, where Aditya saves a hysterical Jiya from an overturned car that's about to explode. One wonders how the car got into the "Crash".

As for the acting, Katrina is thoroughly enchanting, and has definitely matured from her days of Maine Pyar Kyun Kiya. Akshay Kumar keeps the tempo up with intermittent and enjoyable-for-a-change one-liners, which genuinely crack you up from time to time.

Anil Kapoor, a life member of the why-doesn't-he-just-retire genre of actors, looks thoroughly unkempt for the successful businessman he attempts to portray. And even though her screen time's limited, Bipasha Basu pulls off her role with complete ease.

The music by Anu Malik is ear-catchy and a joy to listen to. Thankfully, the movie limited the songs to the important scenes, and didn't overdo it by including all 14 songs on the album in the film.

For all Akshay fans out there, this one's a must-see. The movie's great, the actors give excellent performances, and while the climax may not exactly intrigue all, it's the journey that matters, right?
Share. Save. Connect.
Tweet
HUMKO DEEWANA KAR GAYE SNAPSHOT

See Humko Deewana Kar Gaye full details
HUMKO DEEWANA KAR GAYE USER REVIEWS
1 - 5 OF 5 COMMENTS
POSITIVE  |  NEGATIVE |  NEWEST  |  OLDEST  |  MOST HELPFUL  |  LEAST HELPFUL
USER RATING
6.3
28 USERS
Performances
Script
Music/Soundtrack
Visuals
NA
NA
NA
NA
Can watch again - NA
Good for kids - NA
Good for dates - NA
Wait for OTT - NA
Srikant Gangadharabhatla on 9th May 2006, 5:20pm | Permalink
I am sad to read such a lop sided review.The movie is the biggest bore of the century and dear Kavita after reading great and correct reviews from you in the past this one indeed is a shocker.HKDKG is the biggest bore ever.
RATING
2
Avdhesh Palliwal on 20th Apr 2006, 7:56pm | Permalink
Good movie.
RATING
10
Ram on 18th Apr 2006, 10:37pm | Permalink
What is happening at fullhyd, all your reviews looks like a advertisements of that movie. And what about 10th class, premante inthe and Illalu Priyuralu reviews. And please maintain the site with accurate information. Other wise you will loose users. Any way you already lost me. By the way please correct the movie timings at sri ramana theatre, there is no show at 9.45
RATING
2
Kris Ray on 18th Apr 2006, 4:50pm | Permalink
I agree with Andy S. This reviewer is thoroughly biased. She seems to be a hard-core, die-hard and-what-not fan of Akshay. This review reads more like an advertisement than a review. On one hand the reviewer says the story is credible.... and on the other hand the storyline she narrates is full of clich
RATING
2
Andy S on 17th Apr 2006, 8:43am | Permalink
great movie??? hahahahahahahaha...i think the reviewer is a fan of those teary loud melodramas that wud get on the nerves of any normal viewer. only a fan of those K-soaps would enjoy this flick and thats not saying much. and abt Anil Kapoor, he's the best thing to have happened to the film. Akshay is competent but seems to have sleeped walked thru the role. Bipasha is good. the rest are strictly ok.

a real fan of Akshay wud prefer the Khiladi movies anyday!

ADVERTISEMENT
This page was tagged for
humko deewana kar gaye movie in kickass
Humko Deewana Kar Gaye hindi movie
Humko Deewana Kar Gaye reviews
release date
Akshay Kumar, Katrina Kaif
Follow @fullhyderabad
Follow fullhyd.com on
About Hyderabad
The Hyderabad Community
Improve fullhyd.com
More
Our Other Local Guides
Our other sites
© Copyright 1999-2009 LRR Technologies (Hyderabad), Pvt Ltd. All rights reserved. fullhyd, fullhyderabad, Welcome To The Neighbourhood are trademarks of LRR Technologies (Hyderabad) Pvt Ltd. The textual, graphic, audio and audiovisual material in this site is protected by copyright law. You may not copy, distribute, or use this material except as necessary for your personal, non-commercial use. Any trademarks are the properties of their respective owners. More on Hyderabad, India. Jobs in Hyderabad.