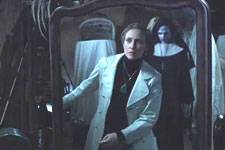 T J Reddy / fullhyd.com
EDITOR RATING
2.5
Performances
Script
Music/Soundtrack
Visuals
6.0
1.0
2.0
3.0
Suggestions
Can watch again
No
Good for kids
No
Good for dates
No
Wait to rent it
Yes
You know the demon Nun wins at the end. She's in The Conjuring 2. This is no spoiler - this is a fact. The makers of this film are looking to snare a decent number of people who have 90 minutes and a few rupees to spare on their latest project. Coincidentally, we had 90 minutes and some spare money. Here are our findings.

Set in Romania's Carta Monastery, The Nun sees Father Burke (DemianBichir) and Sister Irene (Taissa Farmiga) employed by The Vatican to investigate the suicide of Sister Victoria. The duo meet Maurice "Frenchie" Theriault (Jonas Bloquet), the man who originally reported the suicide, and the trio soon embark on an adventure that is destined to change their lives forever. The audience's lives, however, are mostly left undisturbed.

Co-writers James Wan and Gary Dauberman have a hit-and-miss record with most of their stories. While they have mastered the art of making money on the backs of their many forays into the horror genre, the films themselves are scattered across the quality scale. In their latest venture, the writing duo tuck The Demonic Nun in with an Annabelle doll rather than letting her run free with Bathsheba. This lack of ambition and creative direction can be attributed to the sins of both the current and the previous entries into this franchise.

The film digs itself a narrative hole with the coordinated effort of multiple shovels. For example, The Conjuring 2 establishes the fact that Valek (The Demon) can be defeated by a mere utterance of her name. This was uncovered after some cursory research conducted by The Warrens. However, the Vatican-approved ghost-hunters are ignorant of this. They are instead told that the - bear with me here - blood of Christ is the only weapon capable enough of ending Valek's reign of terror. The filmmakers are either victims of an acute case of memory loss or they are actively trying to trick a gullible audience into parting with their money. Their film suggests that evil runs amok amongst us, and hence we conclude that option B holds more water than option A.

This cardinal sin could be overlooked, if not forgiven, if only the movie had characters we could connect to and journeys we could be invested in. However, like the film itself, the characters too are filled to the brim with untapped potential. Father Burke's character could have been constructed in the image of The Exorcist's Father Karras. The story of a man wrestling with his faith owing to his previous failings is a compelling one, but that is not what we get.

Likewise, Elanor Lance of The Haunting (1963) could have been used as a template while writing the character of Sister Irene. The story of a troubled woman whose experiences with the supernatural are perpetually vague and open to interpretation could have also made for a compelling story, but - repeat after me - that is not what we get.

The film is so entrenched in the world that has been previously set for it that it lends itself to cruise-control storytelling. Barring one truly well-crafted set piece, the myriad of inverted crosses, loud noises and beheaded statues of Jesus Christ offer little in terms of fear to even the most religious ones among us.

However, the trio of Bichir, Farmiga and Bloquet try their hardest to convey their fear at the events unfolding around them. They scream, run, sweat, pray and tremble at the many recycled horror tropes they are subject to, and for that we give them a pat on the back for a job well done. They might not be the heroes we need or deserve but they are the ones we get, so we might as well make our peace with it.

The music underlining their journey and the camerawork used to depict their trials and tribulations to the audience is far from satisfactory. The techniques used are so shallow, pedantic and predictable that you can count down the exact second at which the next jumpscare will pop up on screen. Ah, you're scared. Time to reset your timers and lay dormant until the next one inevitably pops up in under 5 minutes.

In an act of brazen acknowledgement, the movie uses Bloquet's Frenchie as a conduit to express its knowledge of its own shortcomings via a series of self-referential jokes. Unlike pastors, we do not offer blanket forgiveness to sins of all shapes and sizes simply because one confesses to them. We hereby sentence the makers of this film to say one Hail Mary for every dollar earned. We predict a few million coming their way and hence hope that those Hail Marys will keep them occupied for a long enough time so as to keep them away from the nearest film camera.
Share. Save. Connect.
Tweet
THE NUN (HINDI) SNAPSHOT 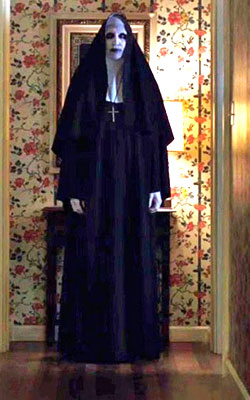 ADVERTISEMENT
This page was tagged for
The Nun (Hindi) hindi movie
The Nun (Hindi) reviews
release date
Taissa Farmiga, Demián Bichir
theatres list
Follow @fullhyderabad
Follow fullhyd.com on
About Hyderabad
The Hyderabad Community
Improve fullhyd.com
More
Our Other Local Guides
Our other sites
© Copyright 1999-2009 LRR Technologies (Hyderabad), Pvt Ltd. All rights reserved. fullhyd, fullhyderabad, Welcome To The Neighbourhood are trademarks of LRR Technologies (Hyderabad) Pvt Ltd. The textual, graphic, audio and audiovisual material in this site is protected by copyright law. You may not copy, distribute, or use this material except as necessary for your personal, non-commercial use. Any trademarks are the properties of their respective owners. More on Hyderabad, India. Jobs in Hyderabad.