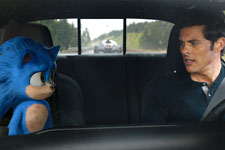 Kritika Deval / fullhyd.com
EDITOR RATING
5.5
Performances
Script
Music/Soundtrack
Visuals
5.5
4.0
6.0
7.0
Suggestions
Can watch again
No
Good for kids
Yes
Good for dates
No
Wait to rent it
Yes
Have you ever looked at a hedgehog from outer space that uses sonic speed to travel through portals across the universe and thought, "This guy needs to be in a buddy cop road trip film!"? We haven't either, and that's probably why we're here bitching about mediocre cinema on the internet while folks like this film's makers are making money hand over fist. It takes a special kind of banal to take one of the most psychedelic creations of the '90s, and do whatever is necessary to render it the least objectionable to the most adults, and simultaneously the most attractive to small children.

Sonic The Hedgehog (Ben Schwartz) is ejected by his owl-shaped mentor onto earth along with a bunch of gold rings that he uses to travel through time and space, in order to protect him from a tribe of echidnas bent on using him for his powers. Flash forward 10 years and you have Sonic hiding in a barn in small-town Montana, seemingly satisfied but friendless and alone, and pining after the local sheriff and his wife, Tom (James Marsden) and Maddie (Tika Sumpter) Wachowski respectively.

Next up: a series of goofball catastrophes all designed to accomplish what appears to be this film's endgame - let's make Sonic The Hedgehog some new friends!

When Sonic accidentally knocks out the power all the way across the Pacific Northwest, he's brought to the attention of both the Department Of Defense and vintage mad scientist Doctor Robotnik (Jim Carrey), who's been enlisted to track down the source of the power outage. To make matters worse, Tom discovers Sonic and hits him with a tranquiliser, making Sonic portal away his bag of portals to San Francisco, and Sonic has to persuade Tom that a road trip to San Francisco is more important than doing whatever he thinks will maybe stop Sonic. So now they have to retrieve the rings while on the run from the DoD and Robotnik. There you have it, gentlefolk - the ET and Rain Man crossover you did not know you needed.

While there isn't much to find outright wrong with this movie, there isn't much to go gaga over either. The plot format makes 90 minutes seem like forever. The premise is rather unforgettable. Sonic comes across more like the average sad and lonely nerd in popular culture than an alien from outer space. We cannot imagine most of the film working for anybody but those whose primary entertainment comes from Chota Bheem and Dora The Explorer - i. e. very small children.

Ben Schwartz and James Marsden have enough chemistry to turn unremarkable characters entertaining when occupying the same space. Jim Carrey, however, is the true standout here, with a performance harkening to his early days as The Mask or Ace Ventura. When he really let's go, Carrey is the best at making you laugh at actual insanity, and it's genuinely nice to see that on screen again. The CGI and cinematography are, following along the central theme of a movie that's - again - about a blue hedgehog from outer space, decent if entirely forgettable, as is the music.

If you're looking for some '90s-era craziness, go home and Netflix Jim Carrey in his natural milieu. This bland, commercialised Sonic The Hedgehog won't do anything but disappoint. 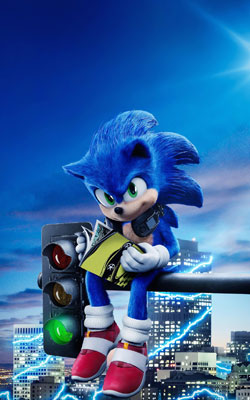 ADVERTISEMENT
This page was tagged for
Sonic The Hedgehog english movie
Sonic The Hedgehog reviews
release date
Ben Schwartz, Jim Carrey
theatres list
Follow @fullhyderabad
Follow fullhyd.com on
About Hyderabad
The Hyderabad Community
Improve fullhyd.com
More
Our Other Local Guides
Our other sites
© Copyright 1999-2009 LRR Technologies (Hyderabad), Pvt Ltd. All rights reserved. fullhyd, fullhyderabad, Welcome To The Neighbourhood are trademarks of LRR Technologies (Hyderabad) Pvt Ltd. The textual, graphic, audio and audiovisual material in this site is protected by copyright law. You may not copy, distribute, or use this material except as necessary for your personal, non-commercial use. Any trademarks are the properties of their respective owners. More on Hyderabad, India. Jobs in Hyderabad.