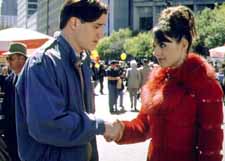 Feroz Hassan / fullhyd.com
EDITOR RATING
7.0
Performances
Script
Music/Soundtrack
Visuals
NA
NA
NA
NA
Suggestions
Can watch again
NA
Good for kids
NA
Good for dates
NA
Wait to rent it
NA
Dr Faustus may have sold his soul to the Devil and learned the hard way that it doesn't really pay. Our friend Elliot Richards (Brendon Fraser) has nothing to learn from him as he goes down the same way, but Devil dear couldn't think of having so much fun with a hundred doctors. First some news from hell, though. The Devil is actually a woman, and God is a man (guess that explains the dynamics of their relationship).

Lovesick, oblivious, eager to please and above all a doormat - Elliot just doesn't know how to have a good time, and the Devil knows she's in for some and, by the way, so are we. She gives Elliot seven wishes (not eight or six, 'coz seven just sounds right, like the seven vices), all for his 'piddly little soul'. Sounds like a good deal, but Elliot's skepticism makes him lose one even before he accepts it. We all know how hard it is to believe these days, don't we? Anyway he starts out on his dream trip, if being a Colombian drug lord, then an ultra-sensitive guy, an extra big NBA player (with an extra small willie), an articulate gay and Abraham Lincoln on his assassination day sound like ingredients for one.

Quite a fun ride for us perverts, though, who just can't get over the Devil. By the way, this tale has been told earlier, on the celluloid I mean, somewhere back in the '70s. But there was no Liz Hurley to play the Devil then and they settled for a male one, so not many watched it. It was funny all right, with the typical British brand of humor (the Devil says he's running short of creativity and the last big idea of his was advertising). Big times demand bigger measures, so we have the Devil all spruced up for the twenty-first century, computers and all.

Truly, till Liz Hurley makes her appearance, Brendan Fraser seems really short on inspiration. Hurley brings with her confidence, attitude and, most of all, oomph, with innocence that only the Devil can possess. A combination such as this can have anyone on his knees. There is Frances O 'Connor playing Allison Gardner, Elliot's elusive love. Passable!

The movie has just the right director in Harold Ramis. His Analyze This was pretty much along the same malicious lines. Also credited with writing National Lampoon's Animal House, he seems to have a thing for the absurd.

Go ahead and get a taste of evil, but remember to leave it back when you come out of the theater.
Share. Save. Connect.
Tweet
BEDAZZLED SNAPSHOT

ADVERTISEMENT
This page was tagged for
Bedazzled english movie
Bedazzled reviews
release date
Brendan Frazer, Elizabeth Hurley
theatres list
Follow @fullhyderabad
Follow fullhyd.com on
About Hyderabad
The Hyderabad Community
Improve fullhyd.com
More
Our Other Local Guides
Our other sites
© Copyright 1999-2009 LRR Technologies (Hyderabad), Pvt Ltd. All rights reserved. fullhyd, fullhyderabad, Welcome To The Neighbourhood are trademarks of LRR Technologies (Hyderabad) Pvt Ltd. The textual, graphic, audio and audiovisual material in this site is protected by copyright law. You may not copy, distribute, or use this material except as necessary for your personal, non-commercial use. Any trademarks are the properties of their respective owners. More on Hyderabad, India. Jobs in Hyderabad.