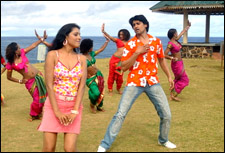 Nupur Barua / fullhyd.com
EDITOR RATING
2.0
Performances
Script
Music/Soundtrack
Visuals
3.0
2.0
1.0
1.0
Suggestions
Can watch again
No
Good for kids
No
Good for dates
No
Wait to rent it
No
For all of you who indulged in the guilty pleasure of watching bad movies with as much gusto as for Dilwale Dulhaniya Le Jayenge, there's good news. B-grade movies are now released, although not too often, in your own neighbourhood multiplexes. God's greatest creation, multi-screen theatres offer anonymity in a crowd, and it is highly unlikely that you will come across your dhobi or milkman.

Old B-grade buff or new, to partake of the experience, try the latest offering from the ambitious producer, Wasim Shaikh (under the innovatively named 'True Dreams' banner) - Who's There? Running almost housefull, at least over the weekend, the movie has nothing whatsoever to do with the title, to begin with. There are no 'Knock Knock' incidents, and certainly no jokes. Incidentally, the absolute lack of humour is probably what makes this a horror film.

The movie begins with a bang - in the middle of a song straight out of the '80s. At some point, you hope to hear somebody yell 'Cut!' and to reveal that the sequence was a film within a film. No such luck. No, wait... the movie begins with a photograph of the director, under which the producer expresses his heartfelt gratitude to the former for breathing life into a shared vision, or words to that effect.

The hero and heroine then make out a little, until the boy breaks away and sighs, tearfully confessing that he will die if she ever leaves him, especially since his parents are dead. The girl, ignoring his obviously clingy/obsessive/sociopathic nature, assures him that she loves him.

3 months later, but naturally, she is about to be married to (hold your breath) some other dude. Boy calls her, and reaches for the bottle of poison that he has stored in his desk drawer for this very day. Girl runs to his house, and sees him frothing at the mouth. She is married, nevertheless, to the dude with a big house and a pleasant disposition.

They push off to Graphix Resort (named after the Mumbai location - Graphix House - that the movie was evidently shot at) in Kerala, for their honeymoon. Girl tells her dude husband, in a song, that she wants to get to know him first. The couple then sing another song, immediately, in which it is established that they are now blissfully in love.

And then strange things happen. Dude keeps seeing a red-eyed man, but his wife sees nothing. Dude's head gets messed up, and somehow, they just cannot leave the resort. Red-eyed man is his wife's (dead) ex-lover, of course, but he does not know that. In the meantime, a gang of incompetent goons tries its best to kidnap the dude (did we forget to mention that he is obscenely rich?), in vain.

Given the sincerity of the makers, it will be an insult to analyse the movie. A love triangle with a twist (a la Dhadkan), Who's There? presents actors trying their best to outdo each other in hamming. The heroine has an unfair advantage - her gender - she draws a few gasps (of shock and joy) when she drops her towel in the shower cubicle.

Hemant Birje makes an appearance as a balding, long-haired (with thick sideburns, to portray a dignified presence, no doubt) priest, named Father Agnel. Unfortunately for the ex-Tarzan, the costume department forgot to give him a pair of trousers under his calf-length white cassock.

If you have had a bad week, and want to avoid people and responsibilities, go and watch Who's There? Remember, just when the movie drags a little, Raja Hasan (in the flesh!) belts out an item number to chase the blues away. You will leave the theatre a changed (and refreshed) person, rest assured.
Share. Save. Connect.
Tweet
WHO'S THERE SNAPSHOT

ADVERTISEMENT
This page was tagged for
hindi movie who is there review
whos there haindi movie Wikipedia
Who's There hindi movie
Who's There reviews
release date
Follow @fullhyderabad
Follow fullhyd.com on
About Hyderabad
The Hyderabad Community
Improve fullhyd.com
More
Our Other Local Guides
Our other sites
© Copyright 1999-2009 LRR Technologies (Hyderabad), Pvt Ltd. All rights reserved. fullhyd, fullhyderabad, Welcome To The Neighbourhood are trademarks of LRR Technologies (Hyderabad) Pvt Ltd. The textual, graphic, audio and audiovisual material in this site is protected by copyright law. You may not copy, distribute, or use this material except as necessary for your personal, non-commercial use. Any trademarks are the properties of their respective owners. More on Hyderabad, India. Jobs in Hyderabad.