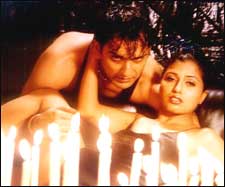 Rohit is the cornerstone of the college culture that inspires you to give the gift of murder to its director. He looks like a reject from the school of hair implants, but that don’t deter the women from falling all over him. They want him to quench their thirst, among other things that are hard to decipher between the moans and groans.

He beats up some dude holding a knife, in a hand that refuses to hold still. He rescues the girl, sleeps with her, steals her money and then gambles it away. This is what happens to young women that get caught on the wrong side of the knife. They meet Rohit.

Now as it always happens, we get a hawt hawt girl from the phoren. This one is from Canada. Pooja is her name and she has a problem with Rohit because he can’t stop himself from proving to the world that he’s the missing link. The link between a monkey with issues concerning hair loss and the Neanderthal with the problem of synchronizing his Swiss watch. She’d rather that he just prove it to her.

Anyway, after she tries to kill him for untying the petrifying tangle of threads that made the back of her top; she meets with an accident. Rohit comes running from the scene of his own accident and takes her to the hospital.

Something in the glucose in the hospital convinced her otherwise and she’s beginning to fall in love with him. But before that happens, we have this little scene in the gym where she argues with Rohit about women’s lib. She brings the debate to an amiable end by tearing open her shirt and giving everyone an eyeful. Now how this scene escaped the well-greased scissors of the censors, I don’t know. And could care less, as am I sure the other men folk would concur. Nudity is rare and far apart and Salman khan doesn’t count, just like his acting.

Now, baring all makes it easier for her to fall in love with Rohit and he plays the coy little village idiot for a while. But then gives in, unable to stop himself from falling for her schizophrenic dressing and toothy smile that has the patent seal on “buxom faced”.

Now Prem, one of the dudes that wants to drink Pooja’s bath water, because she’s all hot and flimsy like that, wants Rohit outta the way. His father, played by Prem Chopra, is the guardian of Pooja and has his own plans of devouring her immense wealth once he gets his son married to her.

Somewhere in this little cacophony of what we call a movie, we have Simran. A tomboy with more makeup than Pooja and the guy they call Bobby. She’s so hot for Rohit that she changes her whole appearance only to go unnoticed and have Bobby shot dead with a pin.

Then all hell breaks lose. The characters start acting. Prem gets shot down courtesy of the pin from hell. The police suspect everyone from Rohit to the pin itself, which they think is dipped in cyanide. Then the serial prick strikes again and this time it's closer to home. A friend of the gang is fatally poked.

The pin is fired using a rubber band stretched between the thumb and forefinger. It’s one of the most genuinely funny moments in recent movie history. Imagine a guy running after you holding the rubber band stretched and taking aim at your receding behind. It’s hilariously ridiculous in its audacity at being evil.

However, by now we know it's Rohit. This is where you poke your finger into your eyes and start swirling your brains around. Things are hurried along and we end up at the climax. Rohit admits to his crime, then he denies it only to contradict himself sometime later.

So they bring in the mechanic, who says that Rohit would sneak out at night to fix bikes. Just when life is starting to lose its meaning, we have a voice saying that it knows the whole story. Hallelujah! It's Rohit! Or someone who looks like him. Stop.

Watch this movie. Find out what happens next. Pay attention when the shirt rips open. Fall in love with Rohit. Forget the uncanny resemblance to Kuch Kuch Hota Hai, in the college scenes that is. The music ain’t worth mentioning so don’t even think about it. Take a chopstick. Prick… prick… poke… poke
Share. Save. Connect.
Tweet
SHAQUE SNAPSHOT

ADVERTISEMENT
This page was tagged for
Shaque hindi movie
Shaque reviews
release date
Quber Chauhan, Janki Shah
theatres list
Follow @fullhyderabad
Follow fullhyd.com on
About Hyderabad
The Hyderabad Community
Improve fullhyd.com
More
Our Other Local Guides
Our other sites
© Copyright 1999-2009 LRR Technologies (Hyderabad), Pvt Ltd. All rights reserved. fullhyd, fullhyderabad, Welcome To The Neighbourhood are trademarks of LRR Technologies (Hyderabad) Pvt Ltd. The textual, graphic, audio and audiovisual material in this site is protected by copyright law. You may not copy, distribute, or use this material except as necessary for your personal, non-commercial use. Any trademarks are the properties of their respective owners. More on Hyderabad, India. Jobs in Hyderabad.