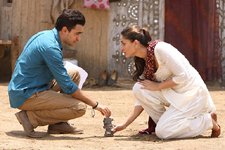 Swayamsrestha Kar / fullhyd.com
EDITOR RATING
4.5
Performances
Script
Music/Soundtrack
Visuals
5.0
4.0
3.0
5.0
Suggestions
Can watch again
No
Good for kids
No
Good for dates
Yes
Wait to rent it
Yes
You know those annoying Facebook posts which circulate the image of any generic malnourished child (preferably coloured too), and ask you to "like" or "share" them, for the sake of humanity / world peace / eradication of poverty / saving the unicorns? Punit Malhotra seems to have taken his lessons in sociology and activism from the wise makers of such posts. That and one reference to His Wizened-ness Mr. Hazare seem to have made up all the gyaan that the newest Dharma Productions director thought fit to cram into the shoddy package that's Gori Tere Pyar Mein.

Since the story is so predictable that we may as well write incomplete sentences and smugly expect our readers to fill in the blanks, let's get it over with. Sriram (Imran Khan) is a spoilt Tam-Brahm who loves his chicken and his chicks. Much like that annoying girl from Five Point Someone, so you have a good idea about how tolerable he is.

Anywho, he's a shameless hedonist, because he looks like a hardcore north-Indian stranded amidst a sea of south-Indians, thus making him also look like he could really use a drink or two, almost all throughout the film.

Sriram's family want him married because that particular course of action is widely regarded as the most surefire way of straightening out and taming a wayward male in this country. Interestingly, that's also what dog-owners think about neutering, but whatever, if the shoe fits...

Sriram's potential bride Vasudha (Shraddha Kapoor), on the other hand, has a Punjabi sweetheart who croons Rabbi Shergill songs with all the passion (or tonal accuracy, for that matter) of a vuvuzuela. Vasudha asks Sriram to refuse the proposed match, and he does. On the actual day of the marriage. By running away in his veshti during the Kashi Yatra ritual. Thus giving a whole new meaning to the phrase "The Runaway Bride".

But before he kindly leaves her stranded, he tells her that he already had the hots for Dia (Kareena Kapoor Khan). Dia, the social worker who boldly ventures into red-light areas to make documentaries on ladies of the night and simpers helplessly when her mom calls and asks her to come back home. Because "akeli ladki khuli hui tijori ki jaisi hoti hai". Oh wait, wrong movie.

As was expected, Sriram and Dia's affair didn't last, mostly because they had as much chemistry as a sacrificial goat has with the altar, and also, as the story tells us, because Sriram was a self-centred jerk.

After having run away from Vasudha, Sriram vows to get Dia back. That proves to be the teensiest bit difficult, because the lissom lass has holed herself up with some scruffy villagers in a place called Jhumli. A corrupt collector (played by Anupam Kher), and the seemingly impossible task of building a bridge in the shortest time possible, are what Sriram has to overcome to win Dia back.

People looking forward to another gang of quirky feisty village folk a la Lagaan / Gangs of Wasseypur / Matru Ki Bijlee Ka Mandola will be seriously disappointed. The villagers here are as dumb as the cattle they herd. Because really, all this hullabaloo over a bridge, when people have gone and discovered boats? And made an actual living out of them, besides using them as transportation?

Also, the village stoner is frowned upon, while the rest traipse around with expressions that are even more vacant that his. Such is the irony of the world.

The rhetoric of bridges is interesting. Bridging the gap between the rich and the poor, between two sore hearts, and maybe between two disparate parts of the country (Dia being a north Indian and Sriram being a Tamilian) is what the film set out to show, but along the way (or right from the start actually), it got lost in a maze called "the cliche".

The dialogues are sloppy, and the screenplay is downright terrible and, at times, even absurd. Especially at that point where Dia starts to mix cement, with the single-minded determination to build the bridge single-handedly.

The music is thoroughly forgettable (what with deeply meaningful lyrics like in the song "Tooh").

While Imran's character has some Rhett Butler-esque moments, it is otherwise a clone of whatever he played in I Hate Luv Storys. The dude really is adorable, but he seriously needs to stop using that cheeky smile to stroll his way through films.

Kareena Kapoor, who's got the feisty-passionate-chick act nailed through the wall, proceeds to hammer it in a bit more in her latest venture. Together, these two have no chemistry whatsoever. They were infinitely better in Ek Main Aur Ek Tu.

It is sad how the film makes light of real social issues, by trying to window-dress shoddy handling of the subject matter with all the gloss associated with the Dharma name. And talking of activism, can we officially sign an online petition asking the Karan Johar camp to stop spoiling the good name of the rom-com genre?
Share. Save. Connect.
Tweet
GORI TERE PYAAR MEIN SNAPSHOT 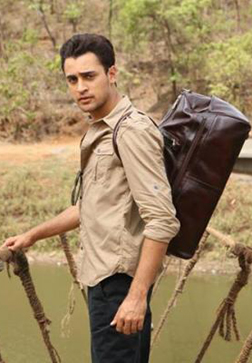 ADVERTISEMENT
This page was tagged for
Gori Tere Pyaar Mein hindi movie
Gori Tere Pyaar Mein reviews
release date
Imran Khan, Kareena Kapoor
theatres list
Follow @fullhyderabad
Follow fullhyd.com on
About Hyderabad
The Hyderabad Community
Improve fullhyd.com
More
Our Other Local Guides
Our other sites
© Copyright 1999-2009 LRR Technologies (Hyderabad), Pvt Ltd. All rights reserved. fullhyd, fullhyderabad, Welcome To The Neighbourhood are trademarks of LRR Technologies (Hyderabad) Pvt Ltd. The textual, graphic, audio and audiovisual material in this site is protected by copyright law. You may not copy, distribute, or use this material except as necessary for your personal, non-commercial use. Any trademarks are the properties of their respective owners. More on Hyderabad, India. Jobs in Hyderabad.