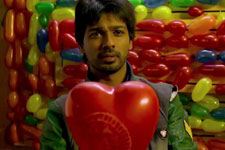 Nupur Barua / fullhyd.com
EDITOR RATING
4.0
Performances
Script
Music/Soundtrack
Visuals
5.0
4.0
6.0
6.0
Suggestions
Can watch again
No
Good for kids
No
Good for dates
Yes
Wait to rent it
No
In a recent interview, Nikhil Dwivedi, one of the lead actors in the movie, mentions how the actors were allowed to pitch in their ideas once Tamanchey went on floor. He goes on to say that he hopes the movie wins the recognition it deserves. Suryaveer Singh, who debuts as a producer, is going to be very proud of him, but the fact remains that a "twisted, quirky love story" needs more than just team work to make it compelling, as Tamanchey proves. To begin with, it needs a story.

The story here goes like this - two con artistes, Munna (Nikhil Dwivedi) and Babu (Richa Chhada) - are thrown together, literally, when the police van they are in has an accident. The two survivors decide to go back to their respective lives of crime, but find themselves unable to separate from each other.

Munna, being the simpler (read: small town) of the two, is the first one to fall in love with the "different" (read: urbanised, potty-mouthed) Babu. As they drift from one day to the next, with no apparent apprehension of getting caught, they get closer to each other - with the help of plenty of swearing, and plenty of booze.

Babu, however, cannot continue with the good times forever. She is the right-hand person, and mistress, of the dangerous don Rana (Damandeep Singh). Babu has to go back to him, if she wants both Munna and herself to survive. Munna, however, refuses to let this turn into a doomed love story.

So, because he is in love, he works his way into Rana's camp. The motive? Not only to woo his lover, but also to force Rana to see that Babu was meant for the younger man. In the process, he has to impress Rana, and also become a "real man", as soon as possible.

The story itself is not a novel one. In the interview mentioned above, Nikhil Dwivedi insists that the bad boy falling for the bad girl is an unexplored facet of love stories, but we have seen it before - numerous times. And then, because love such as this is eternal (is there any other kind?), the lovers are portrayed as glorified idols of romance as the story goes forward.

Because, really, what is the point of assessing their moral characters if they are in love? Love transcends all boundaries and problems, and that is the belief that the makers of this film are going ahead with. The two criminals can kill, loot, cheat, lie etc., but all that does not matter, as long as they are in love. The makers depend on this logic to get the audience to relate to the characters. Expectedly, it is difficult.

The beginning does have a hook, and looks promising enough, but pretty soon, it becomes evident that the plot does not have much intensity. The screenplay is flimsy, and even the sequences are predictable, in addition to the climax and overall storyline, making the overall fare quite dull.

Tamanchey does not try too hard to bring you something new. For starters, as mentioned above, the characters are not very likeable. Plus, we have had more than our fair share of the Delhi underworld (in fact, Richa Chhada starred as a Delhi don herself in Fukrey). The novelty of the accent, the seemingly shocking abuses, the irreverence and the immorality have worn off after countless movies based on the decadence of the crime world in the capital.

Nikhil Dwivedi puts in too much effort to play a simpleton, and it shows. His delivery is somewhat unconvincing, and he does not evoke much sympathy. Richa Chhada is marginally better, and is actually convincing, but talent like hers deserves better-written roles. It is Damandeep Singh who steals the thunder, really. His consistent menacing look may not make him more than a cardboard villain, but he is entertaining.

The production and costume designs are nothing to write home about, but certain nuances in both are taken care of pretty commendably. The cinematography is interesting, but the editing leaves much to be desired - it is not a long movie, but the editing makes it feel like one.

The music is catchy, and is already popular on the charts. R D Burman's "Pyaar Mein Dil Pe Maar De Goli" is easily the most noticeable song, which does not say much about the composers of the original tracks in the movie.

Tamanchey can be easily avoided, unless you love watching movies on the criminal underbelly of Delhi. Again, just to remind you, there is nothing new here, but if you have to go for it, then look out for the strange lovemaking scene in the middle of a bank robbery.
Share. Save. Connect.
Tweet
TAMANCHEY PYAR MEIN DIL... SNAPSHOT
TAMANCHEY PYAR MEIN DIL PE MAAR DE GOLI SNAPSHOT 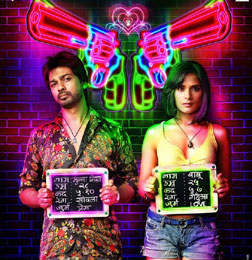 ADVERTISEMENT
This page was tagged for
Tamanchey Pyar Mein Dil Pe Maar De Goli hindi movie
Tamanchey Pyar Mein Dil Pe Maar De Goli reviews
release date
Nikhil Dwivedi, Richa Chadda
theatres list
Follow @fullhyderabad
Follow fullhyd.com on
About Hyderabad
The Hyderabad Community
Improve fullhyd.com
More
Our Other Local Guides
Our other sites
© Copyright 1999-2009 LRR Technologies (Hyderabad), Pvt Ltd. All rights reserved. fullhyd, fullhyderabad, Welcome To The Neighbourhood are trademarks of LRR Technologies (Hyderabad) Pvt Ltd. The textual, graphic, audio and audiovisual material in this site is protected by copyright law. You may not copy, distribute, or use this material except as necessary for your personal, non-commercial use. Any trademarks are the properties of their respective owners. More on Hyderabad, India. Jobs in Hyderabad.