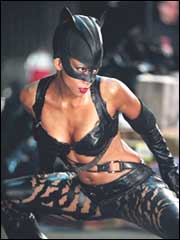 Deepa Menon / fullhyd.com
EDITOR RATING
1.0
Performances
Script
Music/Soundtrack
Visuals
NA
NA
NA
NA
Suggestions
Can watch again
NA
Good for kids
NA
Good for dates
NA
Wait to rent it
NA
It takes a special kind of talent to make a superhero film this reviewer does not enjoy. We’re talking here about the kind of person who thought Hellboy was a hoot, and that Spidey2 deserved a Film Of The Year Award. At Cannes. In the Poignant Social Drama With The Most Kick-Ass Train Sequence Of The Decade category.

So let it not be said that the genre is alien to us, or that we here at fullhyd.com are too high-brow for such populist regressive fantasy-peddlers. (Not that such an allegation is likely to ever be made, but we prefer to keep our asses covered).

Catwoman, however, is not for lovers of superhero flicks. It isn’t for lovers of action flicks either, but it might work for the Halle Berry Fan Club (official motto: How Much Revlon Can You Sell Today?). Catwoman might also appeal briefly to your average depraved S&M junkie, but even s/he will have to fight the urge to giggle at inappropriate moments. For instance, when she brandishes that whip and purrs deliciously, “I’m a bad, bad girl. I have a leather bustier and a whip and everything. Like, how bad am I?”

All right, so she never actually says that, but things mightn’t have been much worse if she did. First of all, Halle Berry as Catwoman is not happening. You might have to keep reminding yourself that she won the Best Actress Award at some point, but this will get more and more difficult to do as she stutters and fumbles her way through both her roles: the mild-mannered Patience Phillips and whip-cracking Catwoman.

Second of all, at no point during the proceedings do you feel the slightest interest in what’s happening on screen. Maybe it’s the boring screenplay, the dim-witted dialogues, or the dire, sucking vacuum caused by a lack of any intelligent thought. Perhaps it’s a combination of the three.

A Not-Brief-Enough Summary: Patience Phillips, a shy artist type, is flushed down the drain of the diabolical cosmetics company she works for, only to be given mouth-to-mouth by a rare Egyptian breed of cat and brought back to life. It is now Patience’s mission, as Catwoman, to bring the guilty to justice and bore the living shit out of you.

By way of love interest you have a cop on the trail of Catwoman, played by Benjamin Bratt. And playing the much hotter villain is Sharon Stone as Laurel Hedare, owner of the diabolical cosmetics company. Perhaps Stone should’ve been given the role of Catwoman; at least we would have been spared Halle Berry’s hernia-inducing efforts at sexy.

Catwoman follows all the usual plot twists and winds up at the exact same ending that you predicted as you bought the ticket. But we won’t diss it for lack of originality. That would be like picking on Baywatch for having a skimpy plotline. Who cares? Nobody. All we want from a superhero flick are a few good cheap thrills. Catwoman keeps the first half of that bargain, and successfully ignores the second.

ADVERTISEMENT
This page was tagged for
Cat Woman english movie
Cat Woman reviews
release date
Halle Berry, Benjamin Bratt
theatres list
Follow @fullhyderabad
Follow fullhyd.com on
About Hyderabad
The Hyderabad Community
Improve fullhyd.com
More
Our Other Local Guides
Our other sites
© Copyright 1999-2009 LRR Technologies (Hyderabad), Pvt Ltd. All rights reserved. fullhyd, fullhyderabad, Welcome To The Neighbourhood are trademarks of LRR Technologies (Hyderabad) Pvt Ltd. The textual, graphic, audio and audiovisual material in this site is protected by copyright law. You may not copy, distribute, or use this material except as necessary for your personal, non-commercial use. Any trademarks are the properties of their respective owners. More on Hyderabad, India. Jobs in Hyderabad.