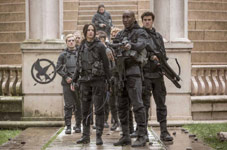 The reason that Katniss (Jennifer Lawrence) remains one of the more inspirational female heroines of recent times is her refusal to swallow such tripe. For her, the fight against President Snow's tyranny remains intensely personal, but at no point does it affect her ideological innocence.

In Mockingjay Part 2, the final installment of the Hunger Games series, Katniss girds herself for the inevitable, climactic showdown with her nemesis, the deliciously evil President Snow (Donald Sutherland). Accompanied by an elite group of soldiers, Squad 451 (a clever reference to Ray Bradbury's novel Fahrenheit 451), Katniss makes a final march to District 1 to assassinate Snow, and to conclusively end the war, once and for all.

Her journey is complicated by the Capitol's attacks; the slippery actions of Madam Coin (Julianne Moore); the erratic, PTSD-induced behavior of Peeta (Josh Hutcherson); and the awkward love triangle between Peeta, Gale (Liam Hemsworth) and her.

The anti-war message of the series finds its logical culmination in The Mockingjay Part 2, and it succeeds in its presentation of a complex, modern and relevant theme within the framework of a highly entertaining and accessible story. Though events take place in the fictional nation of Panem, many instances of political and media manipulation ring uncomfortably true in our own consciousness. Our world has changed, and is a far more dangerous hunting ground than the one Sun Tzu wrote about, or closer home, Chanakya did, but it's both ironic and gratifying that the film adaptation of a YA novel series reiterates this fact so eloquently.

This central premise coupled with the gritty, grey landscapes of Panem, its rubble-covered cities, its abandoned buildings with gaping cavities, and the grim procession of final farewells to many beloved characters could have made for very dour viewing. However, there's Katniss. Or, to be more specific, there's Jennifer Lawrence playing Katniss Everdeen.

Lawrence is the best thing that could have happened to this series. Her act permeates this dystopian story with much-needed human colour: angst, vulnerability, confusion, sorrow - she portrays every emotion effortlessly, and convinces the viewer to invest emotionally in the events playing out onscreen. To Suzanne Collins' credit, she has created an exciting protagonist, and Katniss is a child-woman, a neo-feminist and a warrior who is not, in any way, circumscribed by tacked-on gender stereotypes.

As a matter of fact, Mockingjay Part 2 has a phenomenal line-up of powerful female characters while the male characters are mostly as boring as green tea. Emblematic examples would be the bland love interests, Peeta and Gale. Hutcherson still makes an effort, but Hemsworth had better watch out or his only claim to fame will be his ex, Miley Cyrus - indeed, a fate worse than death.

The veterans troop in and out, and there just isn't enough of Woody Harrelson (Haymitch Abernathy), Elizabeth Banks (Effie Trinket) and Stanley Tucci (Caesar Flickerman). Sutherland comes close to becoming a mythic villain, but not quite. He's good at portraying an unapologetic mass murderer who is also a frail, old man coughing up blood, and oddly amused even in defeat. Julianne Moore does evoke the plastic menace of Coin, but we believe her hair did half the job for her anyway.

Watching Philip Seymour Hoffman take his final curtain call as Plutarch Heavensbee is a sad experience; this talented actor's untimely death is a loss for all fans of cinema.

However, the biggest problem with Mockingjay Part 2 is its pace. We believe that the technical, cinematic term for it is a "snooze fest". Blame Lionsgate. The slow pace seems to be the direct result of the studio's decision to split the novel Mockingjay into two films. At two hours and seventeen minutes, the film is unusually long as it is. It wouldn't be a stretch to say that the lack of narrative drive has affected the entire film.

The saving graces are the entertaining action set-pieces, but even they are few and far between. In particular, the "pods" that are used to hamper Squad 451's mission make for some imaginatively violent ways to burn, riddle, maim and drown the rebels. Did we mention getting eaten alive? Add that to the list, too. We guarantee that at least one of the attacks on the Squad will make you jump in your seat. However, the 3D adds nothing to the visuals - it just makes the screen darker.

The set design and production values make for visually satisfying fare, and in certain scenes, the decaying cities, empty squares and cowering prisoners are strangely reminiscent of World War II. And when you note the similarities between President Snow and Madam Coin, you realize again how close this material is to reality, where the line between the good guys and the bad guys has been blurred permanently.

At the end of the day, Mockingjay Part 2 is like a perfectly good piece of candy that has been ruined by stretching it out till it lost its original flavor. Either way, it's time to give this franchise the famous three-finger salute and bid it farewell.
Share. Save. Connect.
Tweet
THE HUNGER GAMES: MOCKINGJAY... SNAPSHOT
THE HUNGER GAMES: MOCKINGJAY - PART 2 (3D) SNAPSHOT 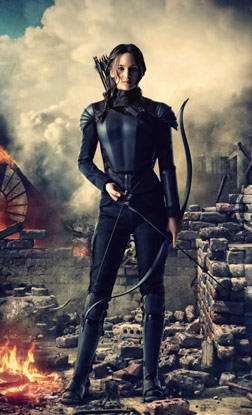 ADVERTISEMENT
This page was tagged for
The Hunger Games: Mockingjay - Part 2 (3D) english movie
The Hunger Games: Mockingjay - Part 2 (3D) reviews
release date
Jennifer Lawrence, Josh Hutcherson
theatres list
Follow @fullhyderabad
Follow fullhyd.com on
About Hyderabad
The Hyderabad Community
Improve fullhyd.com
More
Our Other Local Guides
Our other sites
© Copyright 1999-2009 LRR Technologies (Hyderabad), Pvt Ltd. All rights reserved. fullhyd, fullhyderabad, Welcome To The Neighbourhood are trademarks of LRR Technologies (Hyderabad) Pvt Ltd. The textual, graphic, audio and audiovisual material in this site is protected by copyright law. You may not copy, distribute, or use this material except as necessary for your personal, non-commercial use. Any trademarks are the properties of their respective owners. More on Hyderabad, India. Jobs in Hyderabad.