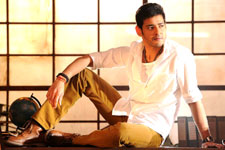 Ravi Kandala / fullhyd.com
EDITOR RATING
5.0
Performances
Script
Music/Soundtrack
Visuals
7.0
4.0
4.0
3.0
Suggestions
Can watch again
No
Good for kids
No
Good for dates
No
Wait for OTT
No
Success, at least in the world of Telugu cinema, is a definite curse. It boxes you in, limiting you to a certain genre and making you repeat things again and again hoping they will succeed again and again.

Take Thaman for example. This reviewer just noticed that he's not had to change the name of the music director for the last four reviews he's written. Neither has he had to change his opinion about the music. All the songs sound like you've heard them before, and the beats in all the songs sound like they've been recorded during Ganesh Nimarjan. All the voices sound like they've been run through a nasal synthesizer without a trace of a natural voice. Aagadu is no different.

Then take Srinu Vaitla. One drunken sequence, one dance sequence (preferably featuring Brahmanandam), a huge joint family with loads of supporting characters used only for comedy, and main characters who speak exclusively in punchlines - these are the staples in every Vaitla movie, and he will not put a toe outside the line.

Aagadu is no different. It is a standard issue Srinu Vaitla film, and has every element that you would expect from such a flick. Mahesh Babu plays a cop, just like he did in Dookudu, Vaitla's previous film with him. He is Encounter Shankar here, a cop known for his sincerity and fearless approach.

The story mixes those of Gabbar Singh and Dookudu. So Mahesh comes to a remote village ruled by a Don and brings an end to the Don's reign. There is also a small revenge angle baked into it, and some small bits of sentiment. The elements do not form an organic whole, and the film feels like it's been stitched together. The comedy too does not match Dookudu in calibre, and works only in bits and spurts. It almost feels like Vaitla himself is tired of his formula.

The only thing that is fresh in the movie is Mahesh. The actor changes his dialogue delivery, using an uber fresh modulation, and looks dashing. He's also attempted to dance, and succeeds mildly in some of the songs. Tamanna does her tired tropes, as do all of Vaitla's other actors.

Technically, too, the film seems to have been wrapped up in haste. The song Saroja has such terrible CGI that the images seem blurred.

If you liked Dookudu, watch it again - that is any day better than sitting through the 167-minute long Aagadu. And if you didn't like Dookudu in the first place, don't even bother with this one.
Share. Save. Connect.
Tweet
AAGADU SNAPSHOT 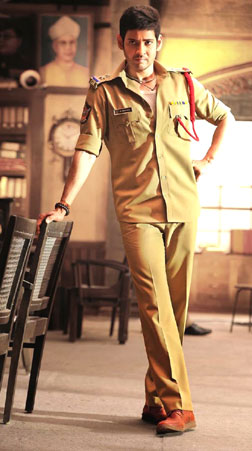 See Aagadu full details
TOP COMMENT
Rajshekhar on 19th Sep 2014, 8:03pm | Permalink
Ravi kandala sir, If you did not like it, how can you give 5 rating, its not fair, you can give it a 0 , plus one for Mahesh for his acting and minus one for doing the same film again
7
2
AAGADU USER REVIEWS
1 - 10 OF 10 COMMENTS
POSITIVE  |  NEGATIVE |  NEWEST  |  OLDEST  |  MOST HELPFUL  |  LEAST HELPFUL
USER RATING
3.8
4 USERS
Performances
Script
Music/Soundtrack
Visuals
NA
NA
NA
NA
Can watch again - NA
Good for kids - NA
Good for dates - NA
Wait for OTT - NA
Roopa.R on 15th Feb 2015, 4:56am | Permalink
What a piece of junk from Mahesh Babu. Total waste of time and money. Wish Mahesh Babu( my favorite) chose wiser.
chetta cinemas on 28th Sep 2014, 11:59am | Permalink
Agakapothe vellamanandi
C on 26th Sep 2014, 8:09am | Permalink
Dookudu 2
IRIG on 25th Sep 2014, 8:06pm | Permalink
ANOTHER DUD FROM SUPPER STAR
Adithya on 22nd Sep 2014, 7:54am | Permalink
Aagadu totally depends on Mahesh's stamina. Without him there is nothing to watch. Some people may feel hurt by this, but some scenes were copied from another movie. The plot features a village where there is a villian who is harrassing the residents. Then enters the hero with all his guts, and confronts the villian and dries up all his money sources.

The villian becomes furious with the hero, and wants to take revenge on him. Like in every other movie, there now comes a flashback where we are shown why the hero is targeting the villian. The villian has in the past hurt the hero's family without, though he doesn't see the hero at that time. And the hero is now taking revenge - he wants to take on all the people who are responsible for the tragedy in his family.

But the revenge has many comic elements in it, because this is Mr. Vaitla's movie. If Rajamouli or Vinayak were the director, there would have been plenty of action and drama for this type of revenge. As is the case in most revenge movies, in the end, the villian knows why the hero wants to take revenge on him before he dies.

The movie is worth watching once for only Mahesh Babu, with a few comedy scenes that he is involved in being quite funny, and else there's nothing else for us as a treat.


Pros: ONlY MAHESH BABU
Cons: Story, music,etc
krishyd on 21st Sep 2014, 7:34am | Permalink
aagadu"..a big sound pollution..movie..nothing else..nothing new..worst..from vaitla
rundader on 20th Sep 2014, 10:20pm | Permalink
let me start my grievance. I have been a great fan of this site reviews i would like to know what prompted the editors rate ad 8.5 and manam 6. i would continue to express this untill and unless the editor justifies his rating . the way you rated ad was very much biased. change the number. i request mr. editor to respond-
fullhyd.com on 21st Sep 2014, 11:24am | Permalink
@rundader: Thank you for liking our site :). The reasons for our ratings for movies are in the reviews. You can also see if the popularity of the films matches our ratings.
kowndinya on 20th Sep 2014, 12:35pm | Permalink
what he did was jus copying..
RATING
3
Rajshekhar on 19th Sep 2014, 8:03pm | Permalink
Ravi kandala sir, If you did not like it, how can you give 5 rating, its not fair, you can give it a 0 , plus one for Mahesh for his acting and minus one for doing the same film again
I hate Telugu movies on 19th Sep 2014, 7:59pm | Permalink
Thaman Sreenu vaitla...the most expensive Xerox machines in tollywood...
LEAVE A COMMENT
fullhyd.com has 700,000+ monthly visits. Tell Hyderabad what you feel about Aagadu!
MORE MOVIES
Latest Reviews
Don't Worry Darling
Vikram Vedha
Ponniyin Selvan - 1
Naane Varuvean
Nene Vasthunna
more
Krishna Vrinda Vihari
Saakini Daakini
Where the Crawdads Sing
Everything Everywhere All At...
Aa Ammayi Gurinchi Meeku Che...
Brahmastra: Part One - Shiva
Oke Oka Jeevitham
Brahmastra: Part One - Shiva
Ranga Ranga Vaibhavanga
First Day, First Show
Contemporary Reviews
Daawat-E-Ishq
Khoobsurat
A Walk Among The Tombstones
Loukyam
Chaarfutiya Chhokare
more
3 AM
Desi Kattey
Finding Fanny
Finding Fanny (Hindi)
Creature (3D)
Power
Teenage Mutant Ninja Turtles...
If I Stay
Sin City: A Dame To Kill For...
Random Reviews
The Whole Nine Yards
Castaway
Sardukupodam Randi
Shankar Dada Zindabad
Cat Woman
more
Perfume Lady
Nagulamma
The Forbidden Kingdom (Telug...
What's Your Raashee?
Karma
Who's There
Raju Gari Gadhi
Wonder Woman (3D)
Halloween
Naandhi
SEARCH MOVIES
Dissatisfied with the results? Report a problem or error, or add a listing.
ADVERTISEMENT
SHOUTBOX!
{{todo.name}}
{{todo.date}}
[
ip{{todo.ip}}
]
{{ todo.summary }}... expand »
{{ todo.text }} « collapse
First  |  Prev  |   1   2  3  {{current_page-1}}  {{current_page}}  {{current_page+1}}  {{last_page-2}}  {{last_page-1}}  {{last_page}}   |  Next  |  Last
{{todos[0].name}}

ADVERTISEMENT
This page was tagged for
Rajshekhar movie rate aagadu
Aagadu telugu movie
Aagadu reviews
release date
Mahesh Babu, Tamanna
Follow @fullhyderabad
Follow fullhyd.com on
About Hyderabad
The Hyderabad Community
Improve fullhyd.com
More
Our Other Local Guides
Our other sites
© Copyright 1999-2009 LRR Technologies (Hyderabad), Pvt Ltd. All rights reserved. fullhyd, fullhyderabad, Welcome To The Neighbourhood are trademarks of LRR Technologies (Hyderabad) Pvt Ltd. The textual, graphic, audio and audiovisual material in this site is protected by copyright law. You may not copy, distribute, or use this material except as necessary for your personal, non-commercial use. Any trademarks are the properties of their respective owners. More on Hyderabad, India. Jobs in Hyderabad.