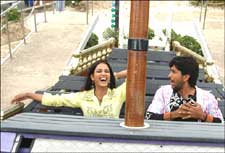 EDITOR RATING
5.0
Performances
Script
Music/Soundtrack
Visuals
NA
NA
NA
NA
Suggestions
Can watch again
NA
Good for kids
NA
Good for dates
NA
Wait to rent it
NA
Some apocryphal statistics state that about 80% of people who have managed to escape poverty and squalor and tyranny, and have entered a world where there is place for things in life other than basic survival, have suffered unrequited love – and its consequence, that most powerful emotion known to man, a broken heart. From Abraham Lincoln to the guy or girl next door, all except a lucky few have seen it.

So ask yourself this – are you one of those hundreds of millions who see their lives as pre-heartbreak and post-heartbreak? For, if you are, it’s not possible to see Maa Iddari Madhya as just another mediocre film – which it is. You might end up feeling far too insecure for the hero, you might end up hating the heroine too much, and and you might end up getting far too upset in the climax.

Forgetting the big picture – that this is one of those films that you wouldn’t have watched even on TV in those childhood days when there was just one Telugu movie per week on Saturday evenings. It’s the etchings on your own mind that bring a rather esoteric film to life for you, and you are completely involved.

Maa Iddari Madhya is like a mud-and-gravel road between 2 remote villages – very well-intentioned, but lacking in executional finesse. In its script, the film explores a very specific kind of romance, and thereby probes rather deep nuances of love – the feelings and resultant actions of a young couple that they themselves are not consciously aware of. But the writers mess up on the screenplay. You can’t even blame the budget – what they mess up on is bringing enough detail into the plot, and enough care for the small things.

Charan (Bharat) is a timid engineering student leading an unexceptional life when one day he rescues a drunk girl Shivani (Vidisha) from falling under an MMTS train. He has to take care of her for the night since she is not in her senses, and even gets into jail in the process.

The next day the girl meets him to find out what happened, and bullies him into following her around and keeping her company. She is quite the mafioso with him – she browbeats him continuously, even beating him up. Part of this is her persona – she is inherently irascible – and part of it is Charan’s own mild-mannered character.

The first part of the film is fun for a while as you enjoy Shivani’s complete masculine bearing – she drinks to cope with a failed love, she beats up eve-teasers, she write stories where the heroine rescues the hero in the climax by battling the goons, and she generally keeps ordering Charan around. However, they slowly draw close, and Charan, who is trying to shake her off for a good part of the film, falls in love with her, though neither actually says it aloud.

Then Shivani brings a man along one day and tells Charan that her parents are talking to her about marriage to him. Charan is shattered, and asks Shivani what her feelings for him are, what their relation is. Shivani asks him to meet her the next day on a hill-top, and then tells him that they should both not get in touch for a year, and meet exactly the same day next year to see how they feel about each other.

Charan waits agonizingly, and is back there the next year. Only, Shivani doesn’t show up.

It’s hard not to empathize for Charan despite the rather average performance of Bharat. Especially when you realize why Shivani did not turn up – that he is just collateral damage in her quest to find peace for herself in her own troubled life. Like we said, the movie does have an involving script.

Vidisha stands out with her performance in the film that revolves around her character. She does a commendable job as a go-getting girl, even in the emotional moments at the end. Bharat needs a lot of improvement and modulation in dialogue-delivery. M S Narayana, Brahmanandam, L B Sriram and Krishna Bhagawan provide some standard comic footage as idiosyncractic characters. The film does have some good music, too.

Maa Iddari Madhya could have been a good romance with better writing. In the absence of any big films for several weeks now, this one might be a decent watch if you are starved for Telugu films.
Share. Save. Connect.
Tweet
MAA IDDARI MADHYA SNAPSHOT

ADVERTISEMENT
This page was tagged for
my sassy girl movie telugu remake
maa iddari madhya telugu wiki
Maa Iddari Madhya telugu movie
Maa Iddari Madhya reviews
release date
Follow @fullhyderabad
Follow fullhyd.com on
About Hyderabad
The Hyderabad Community
Improve fullhyd.com
More
Our Other Local Guides
Our other sites
© Copyright 1999-2009 LRR Technologies (Hyderabad), Pvt Ltd. All rights reserved. fullhyd, fullhyderabad, Welcome To The Neighbourhood are trademarks of LRR Technologies (Hyderabad) Pvt Ltd. The textual, graphic, audio and audiovisual material in this site is protected by copyright law. You may not copy, distribute, or use this material except as necessary for your personal, non-commercial use. Any trademarks are the properties of their respective owners. More on Hyderabad, India. Jobs in Hyderabad.