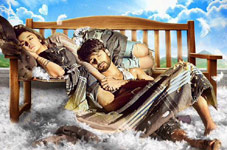 Josh / fullhyd.com
EDITOR RATING
5.0
Performances
Script
Music/Soundtrack
Visuals
9.0
4.0
7.0
6.0
Suggestions
Can watch again
No
Good for kids
Yes
Good for dates
Yes
Wait to rent it
No
We can write this paragraph about Shaandaar:

"Shaandaar is an endearing tale of a father-daughter duo whose love for each other helps them deal with a very calculating matriarch and the ostentatious but drearily transactional lifestyle she imposes on them. Written by the talented Anvita Dutt and directed by Vikas Bahl, both fresh from the success of Queen, the film features the wonderful acting talents of Pankaj Kapur, Shahid Kapur, Alia Bhatt and Sushma Seth. The performances are all top-notch and the film often employs magical realism with interesting visuals like dreams drawn as moving illustrations on little notes. There are vibrant colours throughout the movie, and sprightly music by Amit Trivedi."

And that would be about as accurate as the following paragraph:

"Bombay Velvet is the gripping tale of a street fighter whose love for a jazz singer drives him to seek out power under the charge a very calculating businessman in the grim, power hungry underbelly of 1960s Bombay. Written and directed by Anurag Kashyap, fresh from the commercial success of Gangs of Wasseypur and critical acclaim of Ugly, the film features the star power of Ranbir Kapoor, Anushka Sharma, Karan Johar and Kay Kay Menon. The performances are all earnest and the film creates a brilliant noir atmosphere with great attention to detail in the recreation of a seedy Bombay which reminds you of Scorcese's efforts to portray New York. The colour palette is suitably dark, and there is foot-tappingly quirky jazz music by Amit Trivedi."

Bombay Velvet sounded really good on paper. But it just didn't work. And that's the thing with Shaandaar, too. It doesn't work for the most part. Like how Shahid Kapoor's romance with Alia attracts about as much attention as a mushy conversation you'd eavesdrop on in a boring cafe. Kapur and Bhatt are both terrific actors. And individually they do a great job of conveying what their characters are going through. But you never feel the magic in the romance.

The romance is just one of the many things in the plot. And the plot itself is a strange beast. There is a business family, the Aroras, headed by an insufferable Matriarch Mummyji (Sushma Seth), and comprising son Bipin (Pankaj Kapur), daughter-in-law Geetu and their plus-sized daughter Isha (Sanah Kapur). And there is also the "adopted" daughter Alia (Alia Bhatt). The Aroras get into a marriage alliance for Isha (also a "business deal") with another business family with a very Sindhi father (Sanjay Kapur) and his very gymming son (Vikas Varma).

In the course of this business wedding organised by Jagjinder Joginder aka JJ (Shahid Kapur), there is love between Alia and JJ, a sub-plot on their respective insomnias, a sub-plot on fat-shaming the other daughter, a sub-plot on the father's closely kept secret, a sequence on the hallucinogenic effects of brownies and mushrooms, a bachelorette party with women sporting fake moustaches, and a really trite sequence called "Mehendi with Karan". Yes, with Karan Johar playing himself as a money-minting celebrity performing at a wedding.

Most of these don't work. We appreciate that Bollywood is treating fat-shaming as a sensitive issue, and Sanah Kapur (who is incidentally Shahid Kapur's sibling in real life) does a very nice job with the meek and docile Isha. But her character's turnaround at the end is too jarring. It is less of an arc and more of an acute angle.

Likewise, the film's attempts to create magical visuals have very middling results. For one, they suffer from confused and half-baked writing. Like the sequence where everyone in the wedding party consumes hallucinogenic shrooms and their hallucination antics are shot with copious amounts of CGI. These scenes seem to be stretching time while you're too occupied with searching the frames looking for something to laugh at. The visuals also suffer from inconsistent quality. Some portions of the CGI are extremely well done while some others make you wonder why anyone bothered.

What does work is the magnificient cast. Pankaj Kapur returns to absurdist cinema after (the far better but still unsatisfactory) Matru ki Bijlee ka Mandola. His lovely performance actually makes you care for this shoddily-written paternal character. Shahid Kapur, too, does his best to conceal the shortcomings of the movie with his charm and his spectacular dancing talent. Following both the Kapurs close on the heels is Ms Bhatt who makes a completely implausible character look easily believable. From seductive stares to grateful glances, her eyes seem capable of summoning up any expression with ease.

The supporting cast is great, too. Vikas Varma, Sanah Kapur and other members of the Arora family all display real talent. Sushma Seth, in particular, comes across as hideous and hilarious simultaneously. Aside from the performances, the music by Amit Trivedi is energetic and fun.

These positives don't count for much, though. The film can feel entertaining in parts but fails as a whole. We could blame the writing, or the direction, but we will boldly hypothesise an alternate reason for this disappointment. That Vikas Bahl (or for that matter Anurag Kashyap in Bombay Velvet) worked with Karan Johar.

Sure, none of the credits include Johar in any creative department. But Vikas Bahl's first film (an amazing Chillar Party) was modestly set in a middle-class gated society and had children as its protagonists. His next film (Queen) once again featured a middle-class protagonist, and Kangana Ranaut is a mainstream star who's tremendously unlike any other mainstream star. And neither of these films was particularly expensive. In fact, Bahl had to undergo quite some hardships to get them made.

Now when this man decides to make a high-budget film set in an obscenely rich milieu (these people live in castles) and fills it with Sindhi stereotypes (which remind you a lot of the Gujju stereotypes in Kal Ho Na Ho), extravagant song sets and homosexual traces, and casts top-billed stars such as Kapur and Bhatt in it, you might begin to see our point on Johar's involvement. All the references to Dharma Productions just reinforce this argument.

That isn't to say everything Karan Johar touches is a mess. Far from it, he rather excels at what he makes generally. It is our belief that he should stick to his work and let folks like Bahl and Kashyap do theirs. Kashyap possibly doesn't know what to do with stars like Ranbir Kapoor and Anushka Sharma and a 120 crore rupees budget (he could make twenty films like Dev D with that sort of money). But this is exactly the material with which Johar makes glorious blockbusters with.

Perhaps these styles of filmmaking shouldn't be merged together. They don't blend. It'd be for the best of all niches of audience if they were left alone. Maybe a film titled Shaandaar might have actually lived up to its name then.
Share. Save. Connect.
Tweet
SHAANDAAR SNAPSHOT 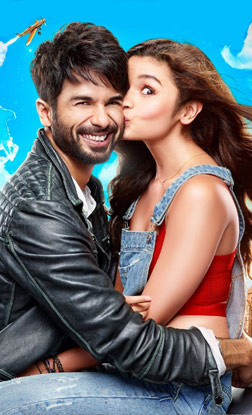 ADVERTISEMENT
This page was tagged for
why were dreams drawn on paper moving in shaandaar
Shaandaar hindi movie
Shaandaar reviews
release date
Shahid Kapur, Alia Bhatt
Follow @fullhyderabad
Follow fullhyd.com on
About Hyderabad
The Hyderabad Community
Improve fullhyd.com
More
Our Other Local Guides
Our other sites
© Copyright 1999-2009 LRR Technologies (Hyderabad), Pvt Ltd. All rights reserved. fullhyd, fullhyderabad, Welcome To The Neighbourhood are trademarks of LRR Technologies (Hyderabad) Pvt Ltd. The textual, graphic, audio and audiovisual material in this site is protected by copyright law. You may not copy, distribute, or use this material except as necessary for your personal, non-commercial use. Any trademarks are the properties of their respective owners. More on Hyderabad, India. Jobs in Hyderabad.